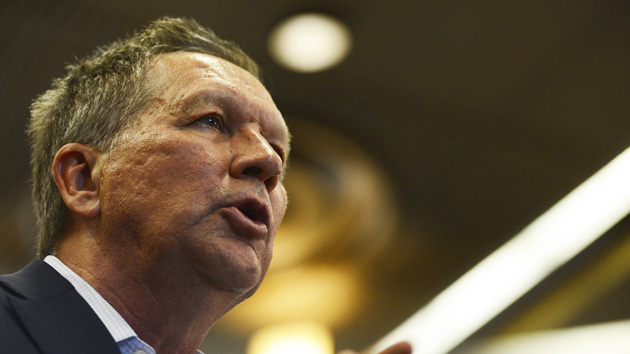 Ohio Gov. John Kasich won his home state in the GOP presidential primary on Tuesday night, and as Ohio is a winner-take-all state, that means he’s put enough delegates out of Donald Trump’s reach to stall the frontrunner’s march to the nomination, for now. The Kasich campaign hopes this momentum will be enough to help him win a few more states and then force a contested convention, with the full backing of the establishment behind him.

Kasich, then, is the GOP establishment’s last and only choice, now that Marco Rubio has bowed out. He isn’t just a favorite among top party officials. In recent weeks, he’s earned a slew of endorsements from newspapers around the country. A few of these papers have pointed to Kasich as the only moderate Republican, mentioning his views on climate change as one of the things that makes him more mainstream than his opponents.

The Detroit Free Press, for instance, wrote: “Kasich accepts the reality of climate change […] Yet climate change denial is de rigeur among most Republican politicians, a shameful dodge that will pile suffering on our children and grandchildren. Although Kasich favors robust state regulation to control climate change over U.S. Environmental Protection Agency standards, this is a more significant step than his GOP cohorts are willing to take.” The South Florida Sun Sentinel, meanwhile, said, “On the subject of climate change, to which Florida is especially vulnerable, only Kasich called for policies to reduce carbon emissions.” The Illinois Journal Star noted that by choosing Kasich, Republicans would “get an intelligent man who doesn’t deny the science behind climate change, though he’d prefer private-sector solutions to government ones.”

Yet the governor is no climate ally; he’s just a bit better than Trump at hiding his brand of denialism. He falls under the “do-nothing” category of politicians who will accept at least some of the science but want to, well, do nothing about it.

Kasich falls under the do-nothing category of politicians who will accept at least some of the science but want to, well, do nothing about it.

Take what Kasich said in the last debate as an example: After Marco Rubio fumbled through an answer on sea-level rise, Kasich’s speech was almost a relief. “I do believe we contribute to climate change,” he began. I say almost a relief, because Kasich in the same answer also spoke in the familiar climate-denier code: “Now, it doesn’t mean because you pursue a policy of being sensitive to the environment, because we don’t know how much humans actually contribute.”

Kasich has repeated that line in campaign stops, including saying at a Vermont event last month that he didn’t know “how much individuals affect the climate.”

His acknowledgement that the climate might be changing does make him seem reasonable compared to the likes of Trump or Ted Cruz. But what matters more are his views on climate policy, and here the governor has shown no more interest in taking action than his competitors. Kasich says he supports renewables but equally alongside coal, natural gas, and oil. He opposes most policies that curb carbon pollution and that encourage wind and solar over dirtier sources. He’s promised to “freeze all federal regulations for one year except for health and safety”—and considers the Environmental Protection Agency’s climate and health regulations as the first that need to go. And he’s criticized the international climate deal the world reached last December, insisting the thousands of climate policy experts that were in Paris for a climate conference should have been there for ISIS: “I think when [Secretary of State John Kerry] went to Paris, he should have gone there to get our allies together to fight ISIS instead.”

In the end, it doesn’t matter much if Kasich manages a “yes” to a question on the science. He is still dangerous. The New York Times, which also endorsed Kasich in January, put it best: “Kasich is no moderate.” The newspaper’s editorial board wasn’t talking about climate change, but it might as well have been.