If you were from Fukushima, Japan, would you move back, despite your fears about radiation?

This is the question photojournalist Michael Forster Rothbart asked as he returned to Fukushima last fall to report on what’s happened over the past five years, after a tsunami and nuclear disaster hit northern Japan and destroyed the Fukushima Daiichi nuclear power plant. Some 488,000 people were evacuated from the three-part disaster. In 2015, nearly 25 percent remained displaced.

Forster Rothbart arrived one week after the nearby city of Naraha had reopened, in September 2015. He stayed in Naraha, 12 miles south of the Fukushima plant and the first town in the Fukushima Exclusion Zone to reopen after the disaster. So far, only 440 residents have returned home, out of 7,400 who had lived there before. Rothbart interviewed returning residents and asked them to write down their hopes and fears for their hometowns.

“I wanted to help these people tell their own stories,” he says. “Five years ago, the news stories were about the disaster itself, but now it’s time to tell stories of resilience and recovery.”

In Tomioka, the town next to Naraha, no residents have returned. Evacuees are allowed to visit their former homes during daylight hours. Thousands of laborers in Tomioka are cleaning or demolishing every building, as well as removing and incinerating all topsoil in inhabited areas. In a couple of years, the government intends to reopen parts of Tomioka; other neighborhoods are too radioactive and may never reopen.

This is part of a much larger project by Forster Rothbart, called Would You Stay?, that looks at the aftermath of nuclear disasters. 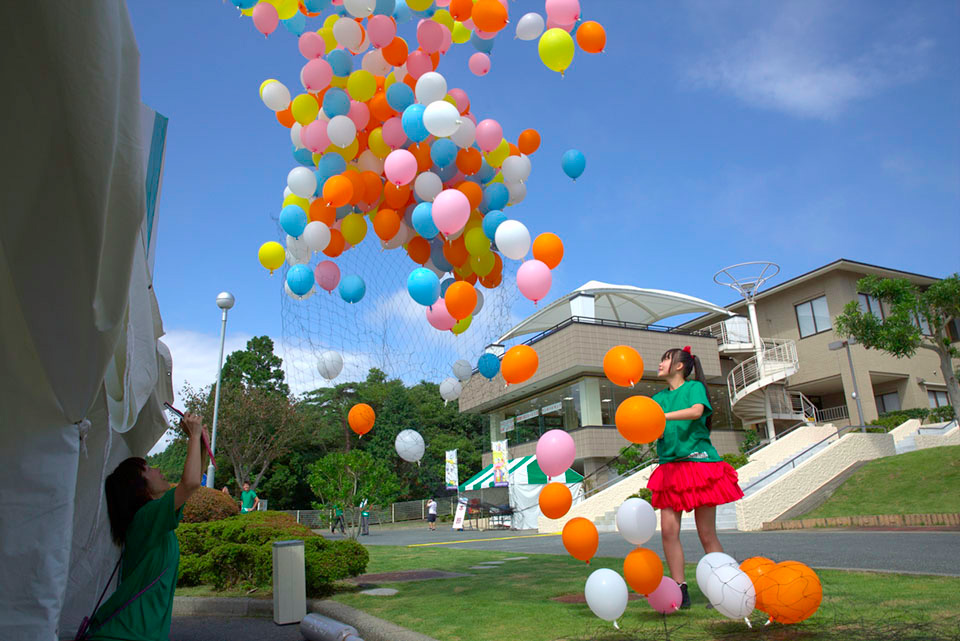 One week after residents were allowed to move back to Naraha, 12 miles south of the Fukushima nuclear plant, the town celebrates with a grand reopening of Tenjinmisaki, a seaside resort. Hundreds of former residents come to the ceremony, but in the following weeks the hotel remains nearly vacant. 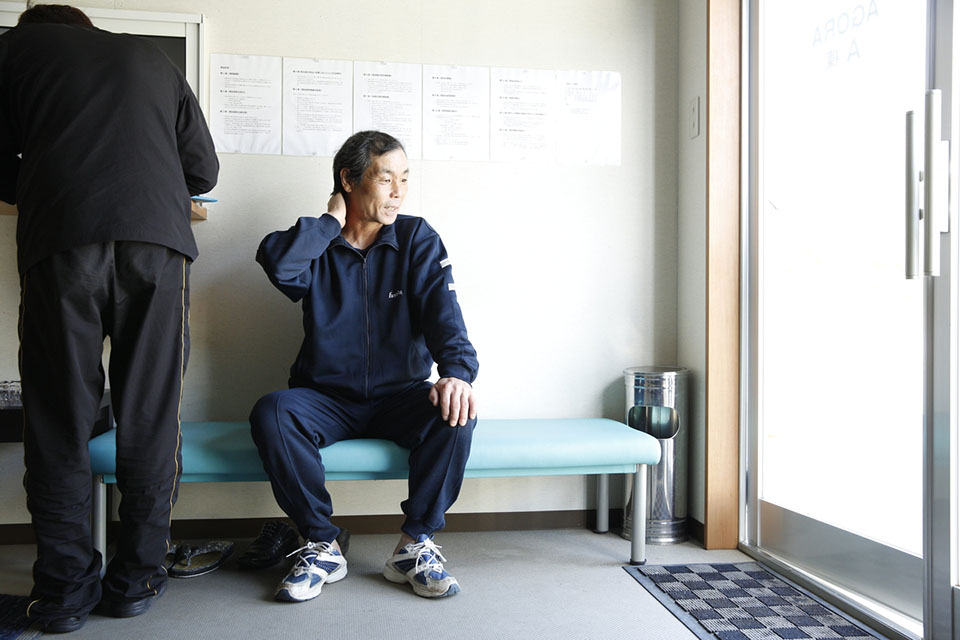 Tamaki Sunaguchi is a decontamination laborer working in Tomioka. He was working in the forest division—clearing all underbrush and topsoil from nearby woodland areas and bagging it for incineration. Now he has been transferred to a road decontamination crew. For now, he’s living in the mountains in Kawauchi, in a worker hotel constructed out of stacked shipping containers that have been converted to dorm rooms.

“Sometimes we work in highly contaminated areas,” he says. “I worry about health, but I’ll be home after a year of this.” For now, he’s living in the mountains in Kawauchi, in a worker hotel constructed out of stacked shipping containers that have been converted to dorm rooms.

There’s a complex maze of contractors, subcontractors, and sub-subcontractors who have divvied up the government contracts for remediation work. Some lower-tier subcontractors have been criticized for underpaying workers and withholding a big chunk of workers’ wages for housing and transportation, but there has been little government oversight. 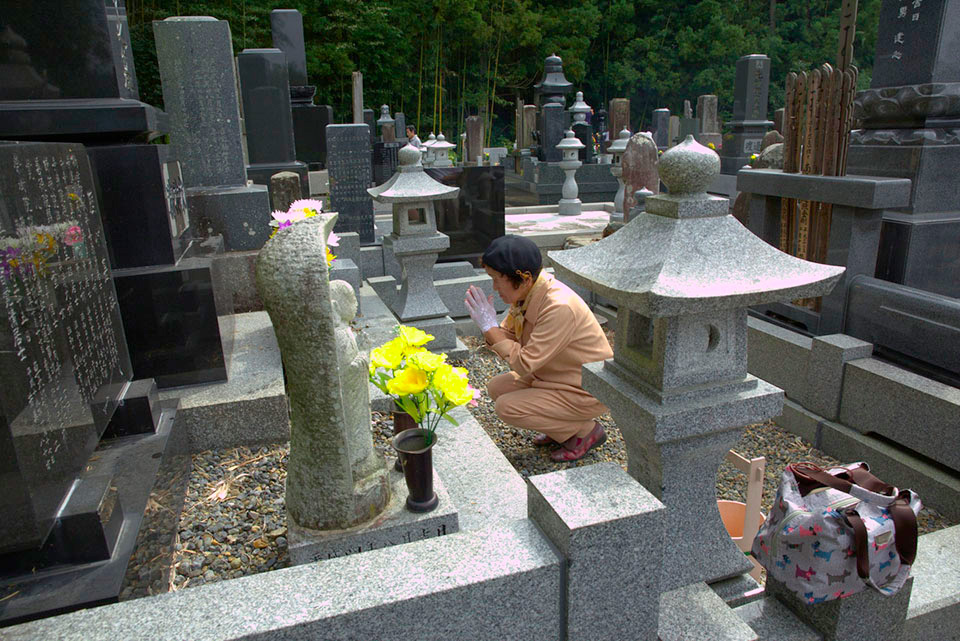 Yuriko Igari from Naraha now lives in evacuee housing an hour away. She returns during the fall equinox holiday to pay respect to her ancestors, praying at the family gravesite near her former home. 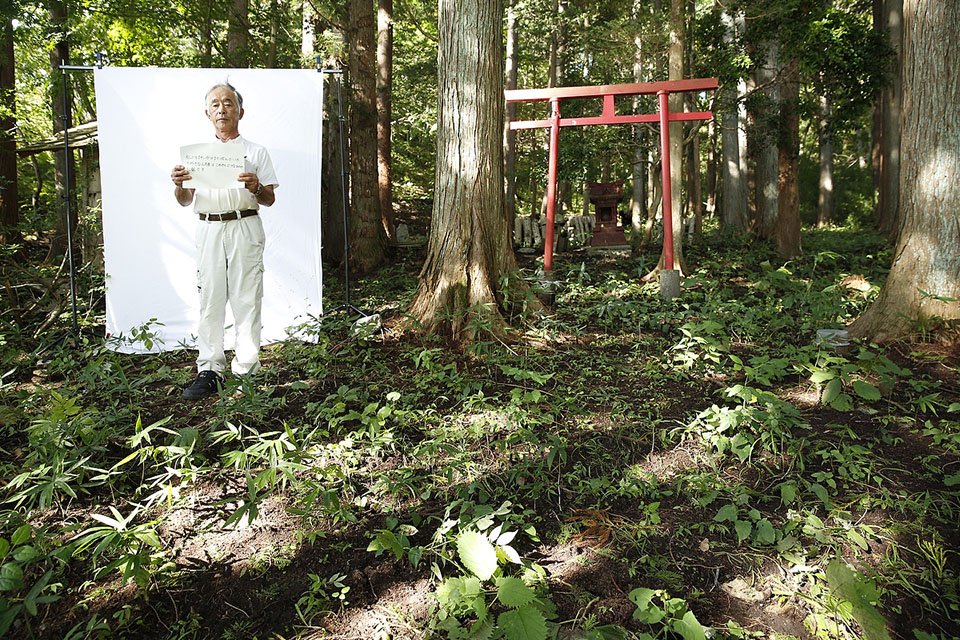 Hidekatsu Ouchi is a farmer from Yamakiya village, in the middle of the Fukushima Exclusion Zone. Although the Fukushima Daiichi nuclear power plant is more than 30 miles away, the worst contamination blew directly toward his village. He knows he’ll never be able to farm this land again due to the high radiation levels, but he hasn’t given up hope that he’ll be allowed to live here. As a temporary solution, he’s rented his farmhouse out to a team of radiobiologists for use as a research station—which gives him a reason to come back regularly for visits.

Standing beside his family’s shrine, Ouchi writes, “Somehow I want to restore Yamakiya to its previous situation by any means possible, and live there together (with all the original residents), all of us again.” However, he worries this is impossible. “Yamakiya, which I love and where I was born and lived until today, I worry how it’s going to be here from now on,” he adds. 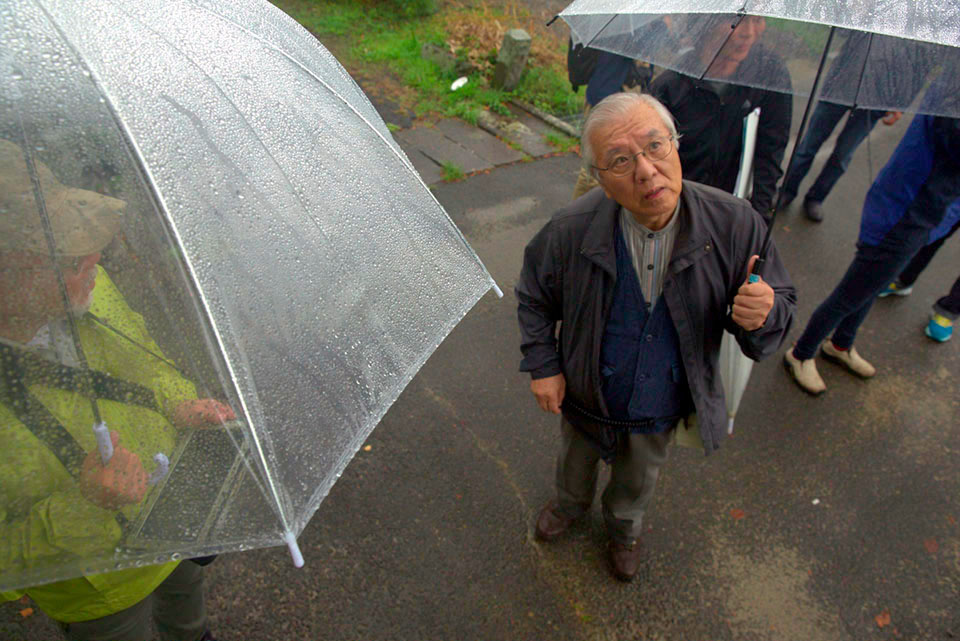 Nuclear scientist Ikuro Anzai and his dosimetry team measure radiation levels near Torikawa Nursery School in Fukushima City and then report their findings to school director Miyoko Sato. He counsels residents to make safety decisions based on evidence rather than emotions: “Look hard at what the facts are, think hard, and then put it into practice,” he advises. 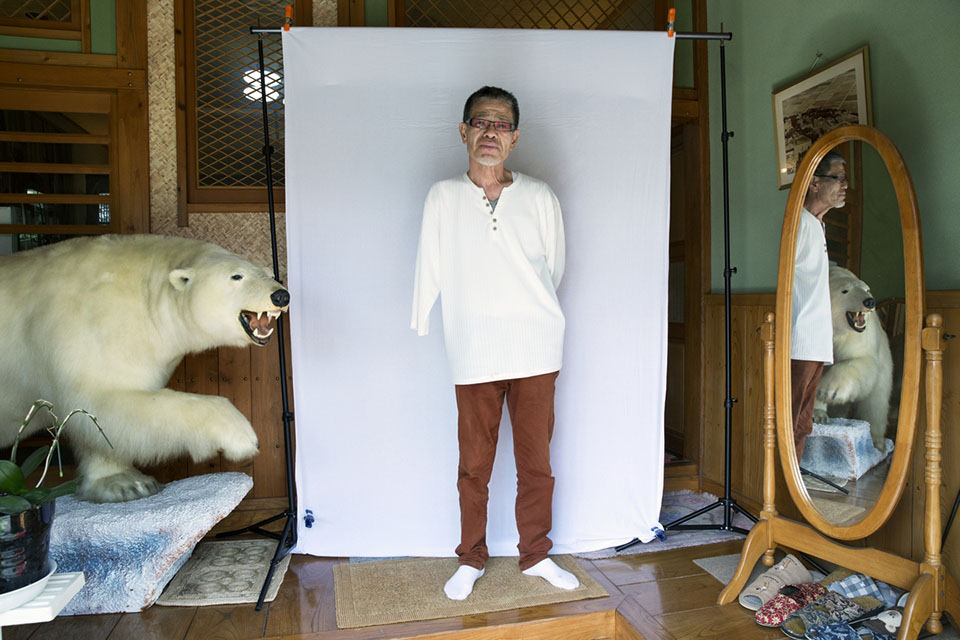 When the tsunami hit, Hisao Yanai was head of the local Yakuza (Japanese mafia) in Naraha. He says the disaster changed him; he decided to leave the mafia and dedicate himself to helping people. He now owns a Japanese pub in Naraha, but he kept many symbols of his former status, including a taxi-yellow Hummer and the stuffed polar bear in the foyer of his sprawling house.

Just after this photo was taken, Yanai, who has one hand, sat beside the bear holding a whiteboard. He wrote about his hope—”solidarity”—and his worry for the future: “How to accomplish the reconstruction of my hometown.” 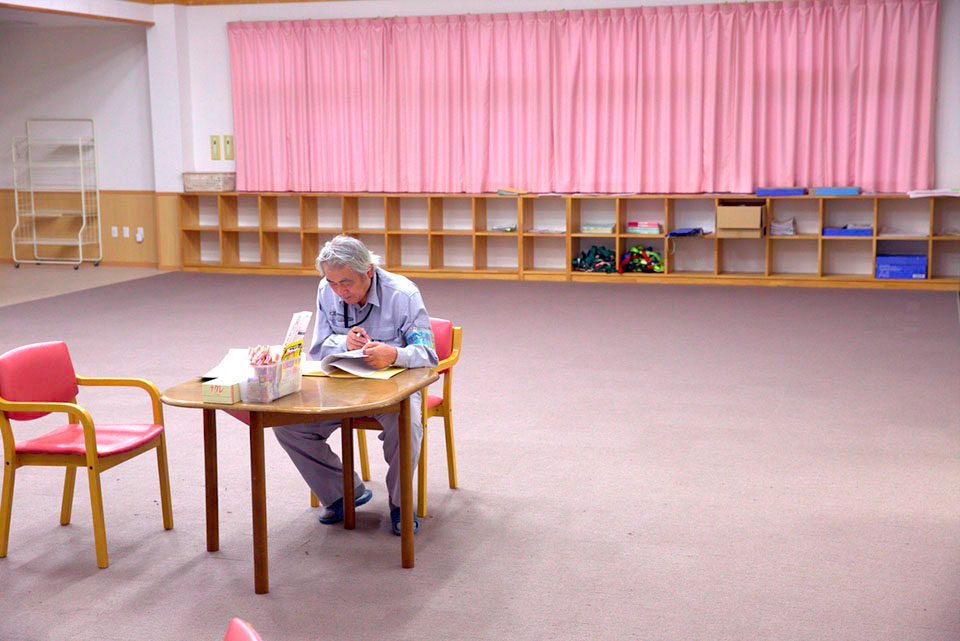 A decontamination supervisor in Tomioka reviews plans for the next day’s work. Maruto, one of the construction companies cleaning up Tomioka, uses an abandoned eldercare facility for its local office. Although Tomioka is next to Naraha, no residents have returned. The 15,800 evacuees are allowed to visit their former homes during daylight hours. In a couple more years, the government intends to reopen parts of the town; other neighborhoods are too radioactive and may never reopen. 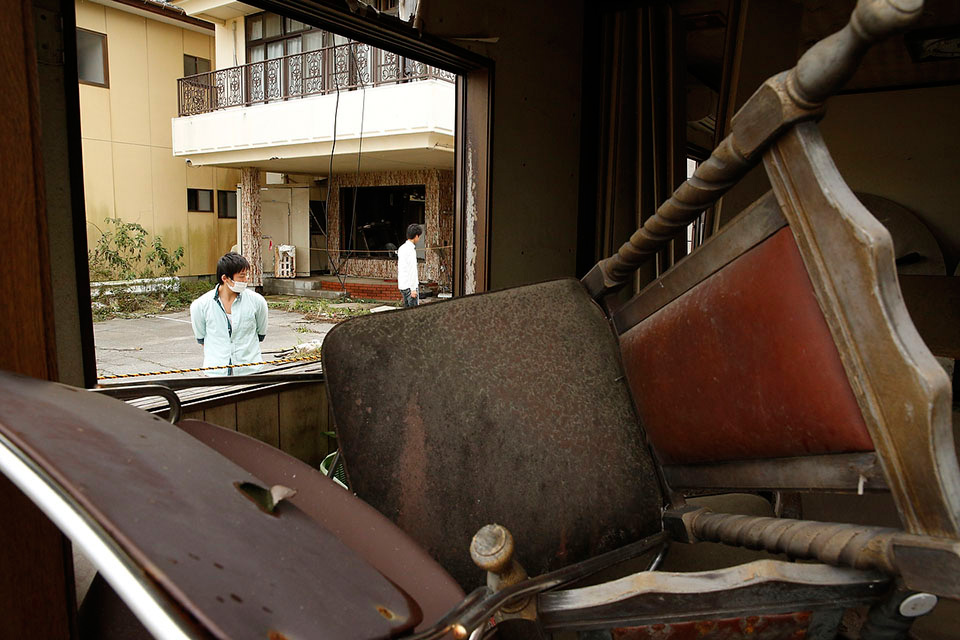 Seven miles from the Fukushima Daiichi nuclear power plant, buildings and cars destroyed by the March 11, 2011, tsunami still stand in the neighborhood near the former Tomioka train station. In 2015, four and a half years after the disaster, tourists and former residents come to see the damage while laborers work nearby to decontaminate homes and commercial properties before demolition. Almost all developed properties in Tomioka are now being cleaned or demolished. 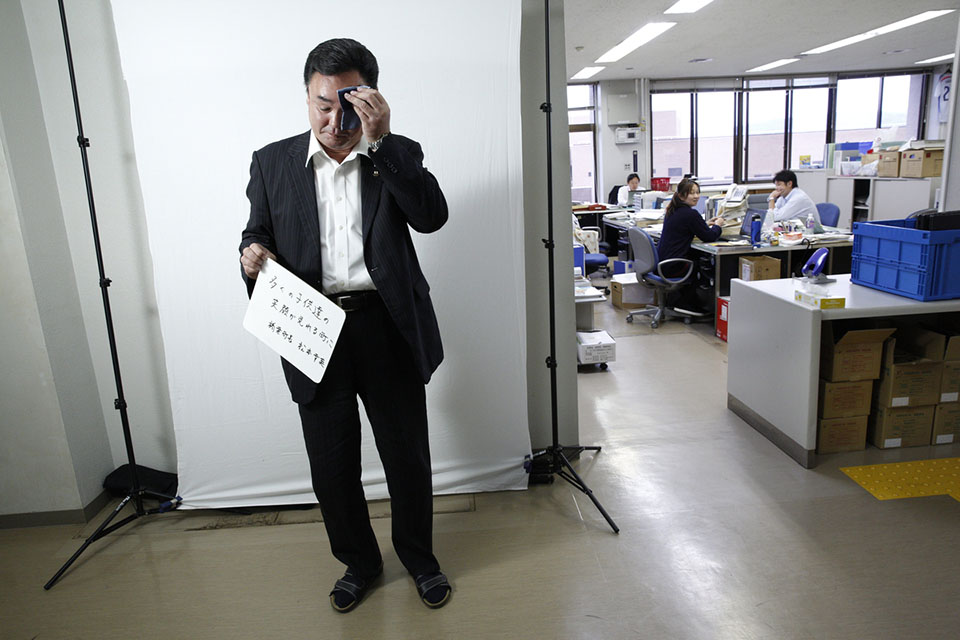 Mayor Yukiei Matsumoto was one of the first people to move back to Naraha more than a year ago—during decontamination and eight months before the town reopened to the public in September 2015. He has been a tireless proponent for his town. He and his staff successfully fought a national government proposal to establish a long-term nuclear waste dump in the town. Instead, they have looked for subsidies and other ways to bring new businesses here. Also, they have plans for a new “compact town” development with commercial space and housing that will replace homes lost in the tsunami. City leaders hope to attract evacuees from towns closer to the nuclear plant who won’t ever be able to return to their original homes.

“I hope Naraha will become a town where we can see many children’s smiles,” the mayor says, careful to frame his worries in a positive light. Still, despite his efforts to persuade residents and his optimistic predictions of growth, the mayor admits he really doesn’t know how many will come back. 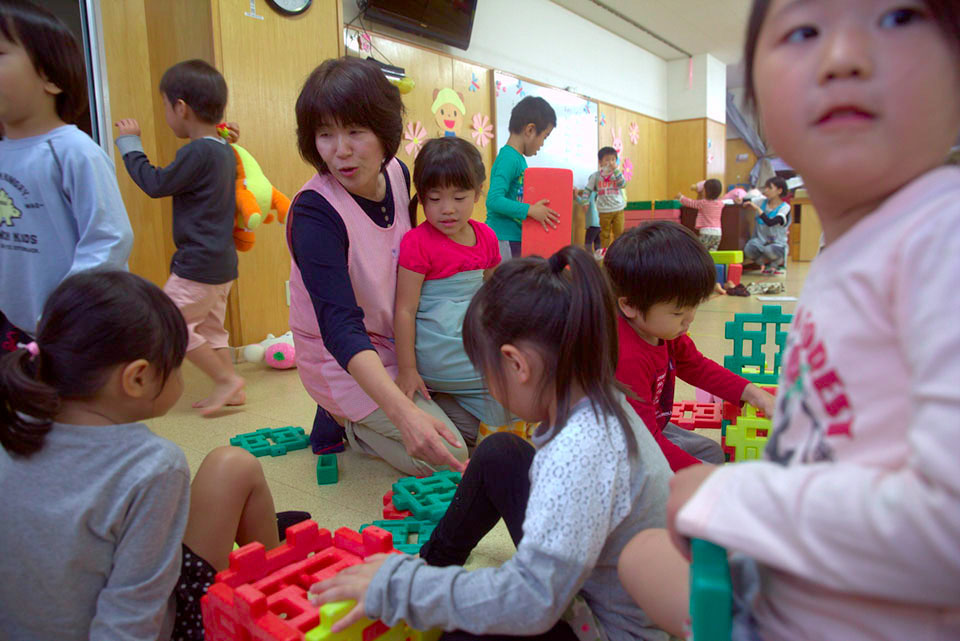 Miyoko Sato, director of Torikawa Nursery School in Fukushima City, has been concerned about radiation on the roads and playground near the school where students walk and play. After inviting physicist Ikuro Anzai to measure radiation levels in the neighborhood, Sato plans to allow the students’ daily outdoor walks to begin again. 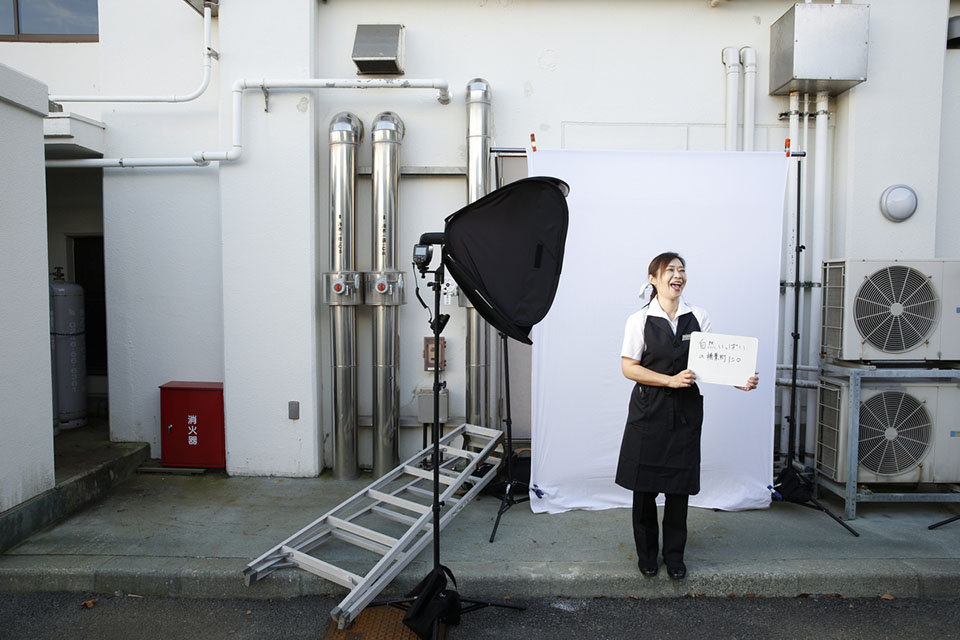 Yukiko Endo, an evacuee from Naraha, has found a job in her hometown, working as a waitress at the newly reopened Tenjinmisaki hotel. After work, she often stops at her empty house nearby before commuting to her temporary apartment in Iwaki, an hour away. She plans to move back to Naraha in 2016, bringing her parents with her. She writes, “I hope Naraha town has lots of beautiful nature.” When asked, she declines to add anything more specific.

However, a few days after the interview, she leaves us a long letter. “After the disaster, I lost the ability to believe people. So many things happened and I was about to have depression. I thought I would be spoiled at this rate, so that I decided to go out and work,” she wrote. “I decided to smile all the time in order not to worry others around me. Even though the steps are very small, I now feel like being able to overcome the problem of distrusting others.” 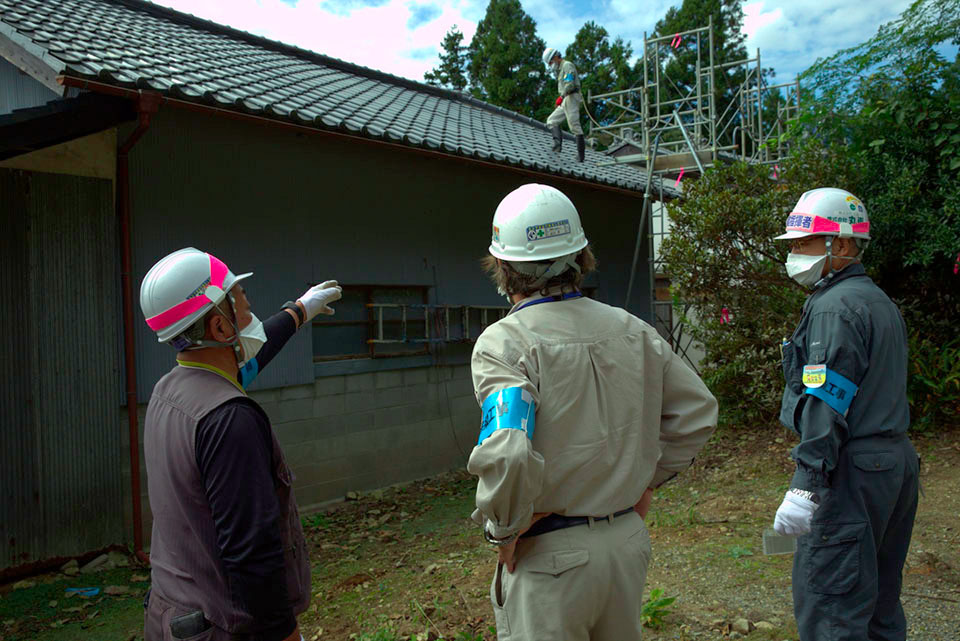 Ben Takeda, a Fukushima decontamination supervisor for the Joint Venture in Tomioka, Japan, in the Fukushima Exclusion Zone, checks in with laborers working to decontaminate homes and commercial properties. 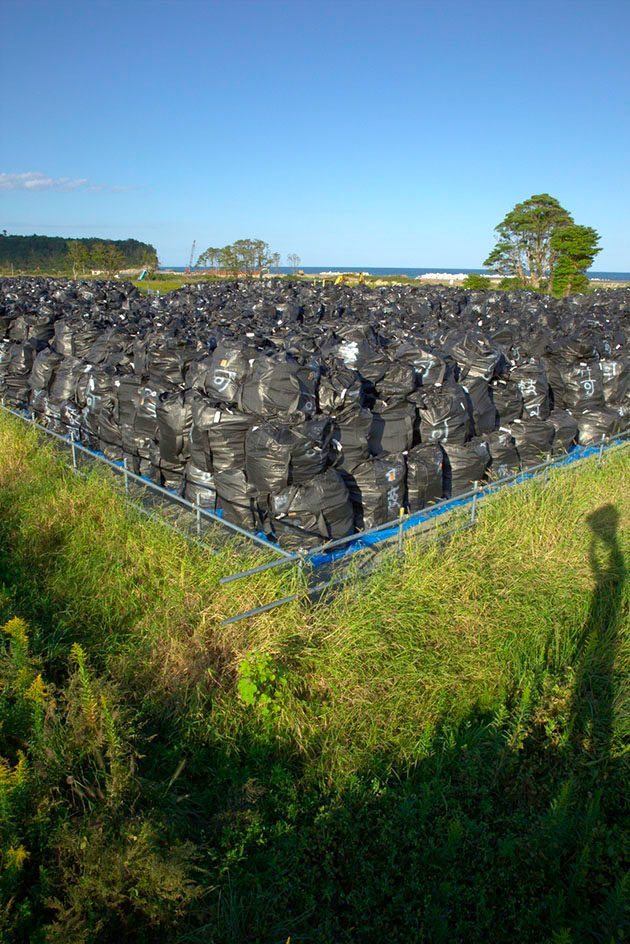 As towns in the Fukushima Exclusion Zone get decontaminated, scraped topsoil, organic waste, and debris from demolished buildings with low-level radioactive contamination get loaded into heavy-duty cubic-meter bags. These bags pile up on work sites, roadsides, and temporary storage fields across the Exclusion Zone. This storage site, by the Yamadahama neighborhood in Naraha, has bags stacked three high in pyramids of 192 bags; a total of 12,096 bags will occupy this site when it is full, and the field is one of dozens in the floodplain beside the Kido river. 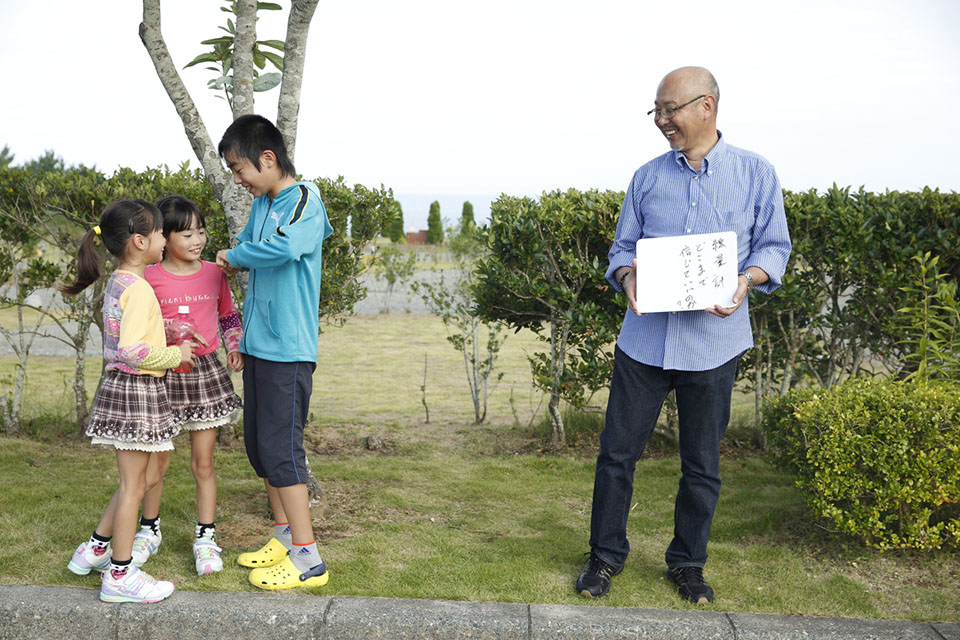 Masatoshi Ohata is an engineer working to design robots that will decontaminate the inside of the Fukushima Daiichi plant. He lives in Iwaki but has brought his grandchildren, ages 7 and 11, to go biking at a seaside park in Naraha. His wife, Kumiko Ohata, believes this visit should be safe as long as their stay does not exceed three hours.

Masatoshi writes, “Please do not forget about the people who are suffering from the damages by tsunami.” As the family walks to their car, he explains the concerns he alluded to. Evacuees from the nuclear exclusion zone receive a lot of attention from the government and many benefits, including free housing and compensation for their losses and “mental anguish.” However, evacuees who lost homes solely from the natural disaster are neglected and receive almost no support.