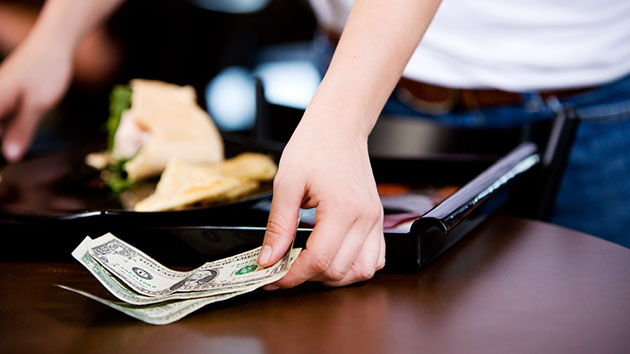 We’re excited to present another episode of Bite, our new food politics podcast. Listen to all of our episodes here, or by subscribing in iTunes, Stitcher, or via RSS.

Is this the end of tipping?

When Danny Meyer, owner of revered eateries like Gramercy Tavern and The Modern in New York, announced last year that he’d abolish the practice at his businesses, he helped spark a national conversation about whether paying a gratuity at a restaurant still makes sense. Along with several other renowned chefs, Meyer has revealed the ugly truth about the practice, which until recently was rarely talked about: that tips create a disparity between different employees, are fairly unregulated and easy to exploit, and are inconsistent and leave servers at the whims of customers rather than the employer.

In this week’s episode of Bite, author and labor organizer Saru Jayaraman tells to us more about tipping’s disturbing origins. Jayaraman isn’t against gratuities, per se, but she feels strongly that the “tipped minimum wage”—the lower wage that restaurant workers take home in all but nine states—has got to go. This lower wage hasn’t increased since the early ’90s—the nineties—and it forces a staggering number of the nation’s 11 million restaurant workers to rely on food stamps.

California is one of the few states where tipped workers earn the full state minimum wage. But even so, some entrepreneurs there think tipping is unfair. Andrew Hoffman, co-owner of Berkeley’s The Advocate and Comal restaurants, says the practice favors front-of-the-house employees.

“There’s nothing that we sell that isn’t the product of all of that collective work,” he says. “Yes, the bartender that night made the drink, but who stocked the liquor when it came in? Who washed the glasses when it was done? A restaurant is a collaboration. It’s a team sport.”

“A restaurant is a collaboration. It’s a team sport.”

Hoffman got rid of tipping and now includes a 20 percent automatic service charge on his customer’s bills instead, which he uses to balance out the pay across the restaurant.

But not everyone has been happy with their no-tipping experiments—in fact, some restaurateurs are returning to a traditional gratuity model. Tune in to our latest episode to hear more.