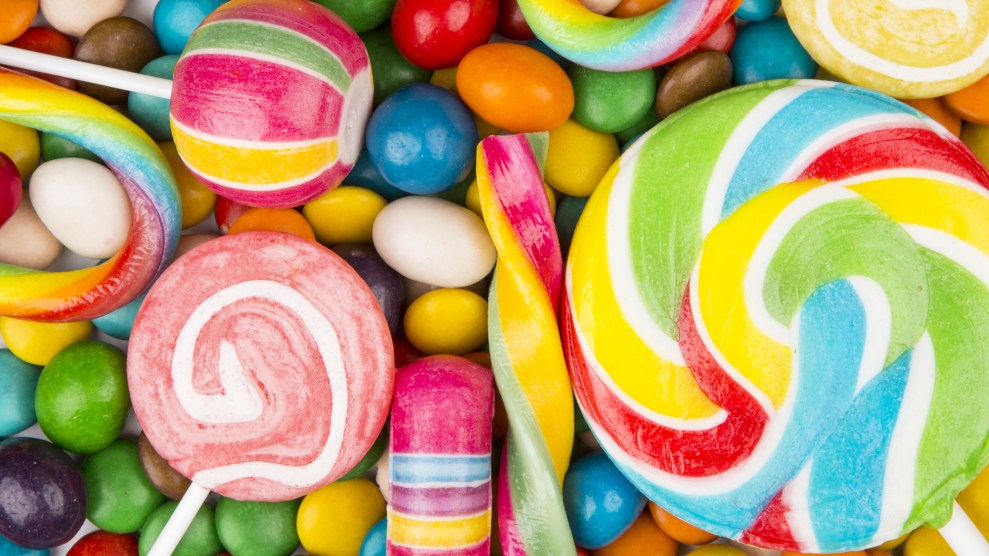 Science says candy is good for me? Sweeeeeeeet. <a href="http://www.shutterstock.com/pic-142437043/stock-photo-colorful-candy.html?src=J99iX7dgNqEwXb6Zn1wnOw-1-14">Vorobyeva</a>/Shutterstock

New emails uncovered by Associated Press reporter Candace Choi reveal the cozy relationship between university researchers looking into the health effects of sugary foods and the business interests that fund them.

One study found that kids who regularly eat candy tend to weigh less than kids who don’t.

What are the makers of sugary snacks and drinks to do in the face of such trends? As Choi’s reporting reveals, one answer may be to fund research by university scientists. Using Freedom of Information Act requests, Choi got hold of some of the emails of industry-funded professors working at public universities. She found some gems. For a 2011 study partially funded by the National Confectioners Association, a team made up of Louisiana State University and Baylor College of Medicine professors—plus a former Kellogg exec turned industry consultant—found that kids who regularly eat candy tend to weigh less than kids who don’t.

Choi found an email from one of the study’s authors to another declaring the paper “thin and clearly padded.” Oops. And though the paper says “none of the funding agencies played any role in the design, analysis, or writing of this manuscript,” emails obtained by Choi from LSU “show the National Confectioners Association made a number of suggestions,” Choi reports. In one email, one of the authors wrote to another, “You’ll note I took most but not (all) their comments.”

The study’s authors defend their paper to the Associated Press:

Carol O’Neil, the LSU professor who made the “thin and clearly padded” remark, told The Associated Press through a university representative that data can be “publishable” even if it’s thin. In a phone interview a week later, she said she did not recall why she made the remark, but that it was a reference to the abstract she had attached for her co-author to provide feedback on. She said she believed the full paper was “robust.”

The piece brims with more examples of industry-funded research drawing sugar-friendly conclusions. Takeaway: Next time you read about a study that delivers sweet health news about some junky foodstuff, take it with a grain of salt.