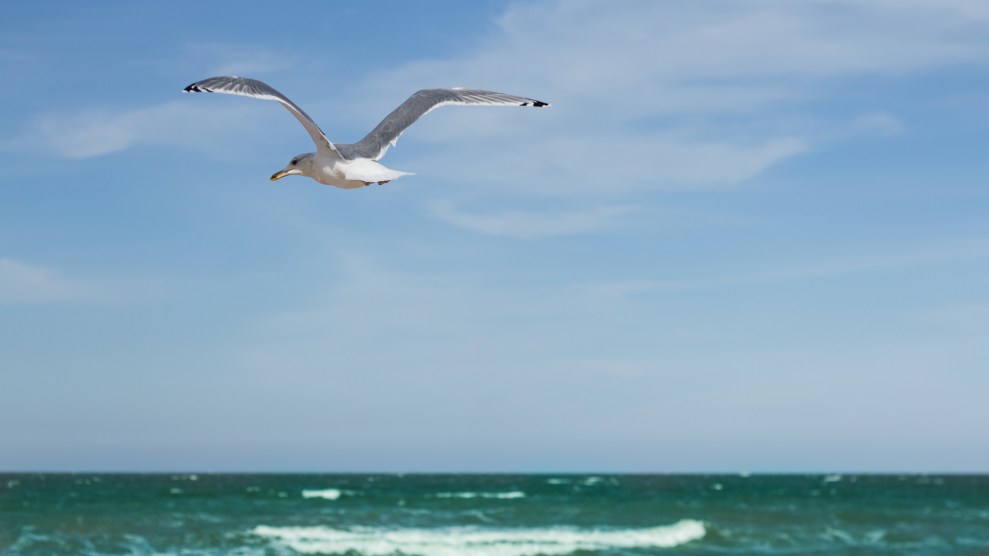 Last year, UK and Chinese researchers identified an E. coli strain in Chinese pigs that resists colistin, a break-glass-in-case-of-emergency antibiotic used to combat pathogens that are resistant to most other antibiotics. The discovery sent a shudder through global public health circles, not just because coliston is so crucial to human medicine, but also because the gene that conferred colsistin resistance, known as mcr-1, is highly mobile—it jumps easily between bacteria species.

“Gulls migrate hundreds to thousands of miles, so they could serve as a vehicle for carrying resistant bacteria somewhere new.”

Predictions it would quickly go global have come true. Just weeks ago here in the United States, colistin-resistant bacteria turned up in a pig intestine and in a Pennsylvania woman with a urinary-tract infection. And now researchers have discovered one of the ways colistin-resistant bacteria can travel, reports National Geographic’s Maryn McKenna:

… two research teams in Lithuania and Argentina report that they trapped birds and swabbed their butts, or scooped up seagull droppings, and found the resistance-conferring gene in E. coli being carried by two species: herring gulls in Lithuania (Larus argentatus) and kelp gulls in Argentina (Larus dominicanus).

McKenna adds that “gulls migrate, from hundreds to thousands of miles depending on the species—so they could serve as a vehicle for carrying resistant bacteria somewhere new.” She points to a 2011 study finding other antibiotic-resistant bacteria in these continent-hopping birds. They likely pick up such bacteria from their habit of eating garbage, Maryn reports.

Hitching an avian flight isn’t the only way bacteria cross borders, of course. Global trade and travel offer plenty of opportunity for pathogens to range widely. But the seagull discovery illustrates just how hard it is to control antibiotic resistance once it takes root. As McKenna notes, the mcr-1 bug has now been found in more than 20 countries.

Colistin resistance first turned up on intensive hog farms in China, where colistin is widely used to make pigs grow faster. Routine use of antibiotics on livestock farms is likely a major driver of the rise of antibiotic resistance, according to the nearly every public health agency, from the Centers for Disease Control to the World Health Organization. The practice started in the United States in the 1950s. In a recent feature story, I found ample evidence that the US meat industry—which currently consumes 80 percent of the antibiotics sold nationally—is finally beginning to rein in the practice.

The problem though, is that our pharmaceutical-intensive meat production model has gone global. Even if we stop overusing antibiotics on farms here, resistant pathogens incubated on farms oceans away can cross our borders—including in the guts of seagulls. As with climate-changing greenhouse gas emissions, the world needs a global pact to slash farm antibiotic use, as a major report commissioned by the UK prime minister recently proposed.