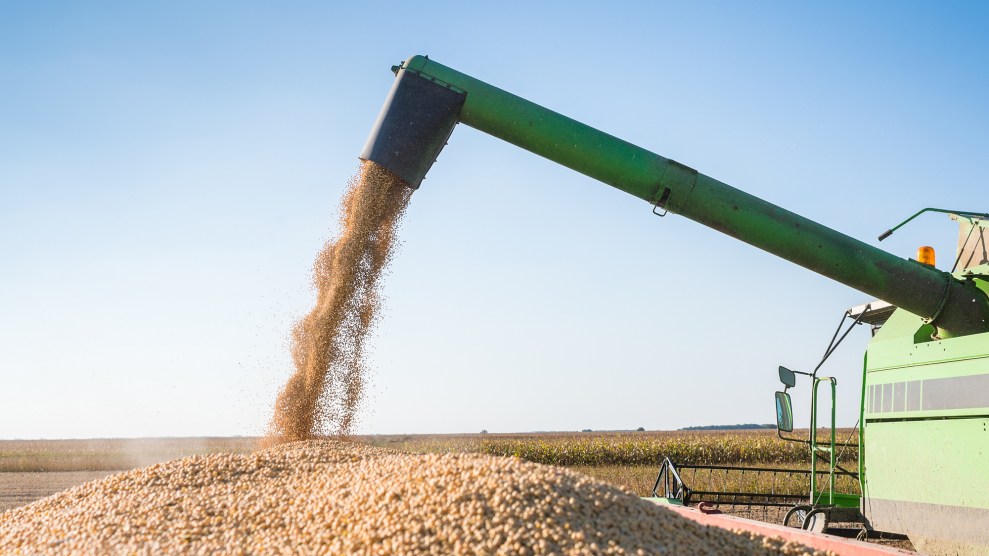 This summer, the Midwest’s farmers are doing what they do every year, only more so: tending massive plantings of corn and soybeans. This year’s corn crop covers 94.1 million acres, a land mass nearly equal in size to California. Soybeans cover 83 million acres—a near record. You’d never know, admiring the bounty on display in the heartland, that corn and soybean prices hover at five-year lows, perilously close to the cost of production.

Why did farmers plant so much this spring when prices have been low for three years? The answer lies in taxpayer-funded farm subsidies, which encourage farmers to plant subsidized crops even when prices are low, ensuring them them at least a small profit even in times of glut. Between 1995 and 2013, federal crop subsidies to US farmers totaled an eye-popping $183.7 billion, the bulk of it to corn, wheat, and soybeans. In 2014, Congress ended direct payments and switched to subsidized crop insurance, but that, too, has proven expensive. What do we get in return for these massive investments?

People who ate the most food derived from subsidized crops were much more likely to develop diabetes, heart disease, or stroke than people who consumed the least.

According to a new study by a team from from the Centers for Disease Control and Prevention and Emory University, not much in in the way of our health. The researchers looked at the five most-subsidized crops—corn, soybeans, wheat, rice, and sorghum—plus dairy, and meat, which are subsidized indirectly, because US livestock are fed mainly corn and soybeans. They note that a “large proportion of these subsidized commodities are converted into high-fat meat and dairy products, refined grains, high-calorie juices and soft drinks (sweetened with corn sweeteners), and processed and packaged foods.”

For example, 30 percent to 40 percent of the US corn crop, by far the globe’s largest, goes into livestock feed, and 5 percent of it goes into high-fructose corn syrup (most of the rest is used for ethanol). Soybeans are divided roughly equally between feed and cooking fat. Even wheat and rice, the only subsidized field crops directly consumed by people, tend to be stripped of their fiber and other nutrients before we consume it—think white rice and white bread. So what we’re paying farmers to produce is mainly meat and processed food.

To gauge the health impact of the diets taxpayers underwrite through the crops we subsidize, the researchers looked at data from the National Health and Nutrition Examination Survey (NHANES), a big, ongoing national study that interviews randomly selected individuals about their dietary choices and also tracks their health through physical examinations.

Overall, 56.2 percent of calories consumed came from the major subsidized food commodities, they found. And this will surprise no one, given how junky the subsidized fare tend to be: Even after adjusting for socioeconomic conditions and lifestyle factors (like smoking), people who ate the most food derived from subsidized crops were much more likely to develop diabetes, heart disease, or stroke than people who consumed the least. The high-subsidy group had higher body mass index (BMI), ratio of waist circumference to height, C-reactive protein level (a marker of chronic inflammation, a warning sign for cardiovascular trouble), and non-HDL cholesterol level.

Now, it’s important to note that the study doesn’t show that subsidies cause these outcomes; it does suggest, however, that the crops policymakers have chosen to subsidize are probably ones we should be eating less, not more, of—raising the question of why they merit federal support. (Meanwhile, according to another recent study by CDC researchers, less than a quarter of Americans meet federal recommendations for eating fruits and vegetables, which are largely unsubsidized.)

So how do we fix this problem? It’s probably a bad idea to directly subsidize, say, spinach farming—unlike corn and soybeans, the stuff is highly perishable, and it would be quite expensive to keep a huge surplus of it frozen. But it might make sense to shift money currently devoted to subsidizing crop insurance for corn growers to programs that make vegetables and fruits cheaper for consumers. Such programs exist and have proven to be effective—yet they’re currently funded at a fraction of the rate of crop-insurance subsidies.