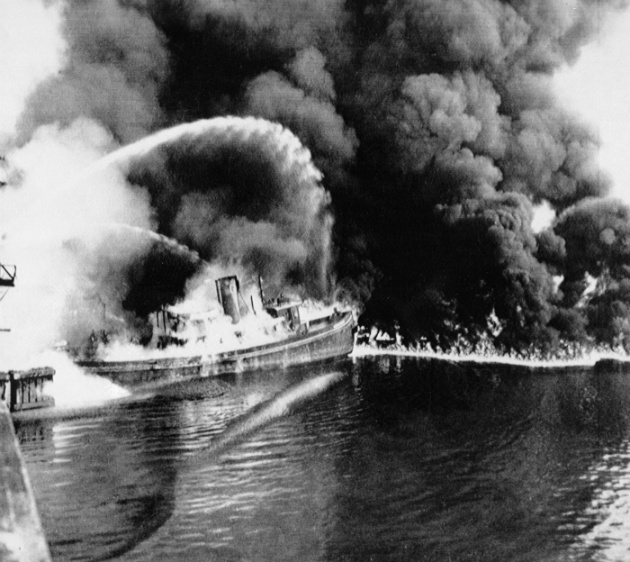 In 1952, a massive fire—fueled by oil and industrial waste—engulfed Ohio’s Cuyahoga River. Was that the inspiration for the platform Republicans just adopted in Cleveland? AP file photo

The Republican Party’s 2016 platform, released on Monday at its national convention in Cleveland, has sections called “A New Era in Energy” and “Environmental Progress.” Both titles are inaccurate. Perhaps they’re meant sarcastically?

If you want a guide to what Republicans would do with full control of the federal government, you couldn’t get a better one than this 2,400-word part of the platform. Like the EPA/Department of Interior spending bill House Republicans passed last week, it makes the GOP’s incredibly radical agenda crystal clear: deregulate pollution, halt any action to prevent climate change, and expand fossil fuel use.

Here are the 11 biggest lowlights:

Cancel the Clean Power Plan. This plan—the EPA’s program to reduce carbon pollution from coal-fired power plants—is the most important piece of President Barack Obama’s climate agenda. The GOP platform dismisses it as part of “the President’s war on coal”: “The Democratic Party does not understand that coal is an abundant, clean, affordable, reliable domestic energy resource. Those who mine it and their families should be protected from the Democratic Party’s radical anti-coal agenda.” As Grist’s Rebecca Leber noted, this language comes almost verbatim from a pro-coal lobbying group. To call coal “clean” is just a falsehood. In addition to its massive carbon footprint, the burning of coal leads tons of conventional pollution such as smog, soot, and acid rain.

Build the Keystone XL pipeline and more like it. “We intend to finish that pipeline and others as part of our commitment to North American energy security.” Republicans have long been fixated on how awesome Keystone would be, even though current gasoline prices might make it not worth building. If gas prices spike, though, Keystone approval could have major consequences for the climate as it would help bring more super-dirty tar-sands oil to market. This plank is basically the opposite of the Democratic platform’s call for the next administration to use a “Keystone test” and reject infrastructure projects that will exacerbate climate change.

Kill federal fracking regulations. Because nothing should stand in the way of fossil fuel development.

“Oppose any carbon tax.” Many conservative policy wonks support a carbon tax as the most market-friendly, efficient way to reduce carbon emissions. The Republican Party, though, is determined to quash anyone’s hopes of a bipartisan compromise on climate action.

Expedite export terminals for liquefied natural gas. To liquefy gas, ship it across the ocean, and re-gasify it uses a lot of energy and results in a huge carbon footprint. Republicans want more of this.

Abolish the EPA as we know it. The platform calls for turning the EPA into “an independent bipartisan commission” and shifting responsibility for environmental regulation to the states. This would remove the federal government’s ability to study the effects of pollution and establish safe standards. In a particularly Orwellian touch, the Republicans promise that a kneecapped EPA would adhere to “structural safeguards against politicized science.” That actually means safeguards against scientific findings they don’t like. In other words, they would politicize the science.

Stop environmental regulatory agencies from settling lawsuits out of court. Huh? Republicans have been pushing this for a while. Here’s what it’s about: When an agency doesn’t do its job of enforcing a law like the Clean Air Act—often the case, especially under Republican administrations—environmental groups sue to force it to. If the agency thinks it will lose, it may then reach a settlement and agree to do its job going forward. That’s what the platform aims to prevent. Fighting in court until every last appeal is dead can make cases drag on for years, and Republicans want to get away with not regulating polluters for as long as possible.

“Forbid the EPA to regulate carbon dioxide.” This one pretty much speaks for itself. It would wipe out the agency’s ability to reduce emissions and slow climate change.

Turn federal lands over to states. “Congress should give authority to state regulators to manage energy resources on federally controlled public lands within their respective borders,” the platform declares. The federal government controls huge swaths of land in the West and already leases much of it for oil, gas, and coal extraction. The platform is quite open about the fact that Republicans think states will extract more rapaciously. That’s precisely the point. And ultimately they want the land entirely under state control: “Congress shall immediately pass universal legislation providing for a timely and orderly mechanism requiring the federal government to convey certain federally controlled public lands to states.” It’s unclear which lands they are talking about, but it’s a safe bet that they mean those that could generate the most money through their despoiling.

Revoke the ability of the president to designate national monuments. The platform calls for amending the Antiquities Act of 1906 to require congressional approval for new national monuments, and it also calls for state approval of new monuments or national parks. So there would be no more Democratic presidents protecting a sensitive, beautiful, or historically significant area from development if Republicans control Congress or the state where it is located.

Halt funding for the UN’s Framework Convention on Climate Change. The UNFCCC is the treaty system through which the world’s 195 nations work together to avoid catastrophic climate change. To defund it would undermine the Paris Agreement that was struck last December and throw a huge wrench into global climate progress. That’s the point. The platform explicitly states, “We reject the agendas of both the Kyoto Protocol and the Paris Agreement.”

There’s also some random small-bore stuff, like opposition to listing the gray wolf or the lesser prairie chicken as endangered species. There are a ton of right-wing talking points, like declaring the Intergovernmental Panel on Climate Change “a political mechanism, not an unbiased scientific institution.” And there are additional paeans to the virtues of increased fossil fuel extraction.

In one particularly impressive rhetorical backflip, after the platform calls for virtually eliminating all environmental protections, it then says, “The environment is too important to be left to radical environmentalists.” But most Americans support regulations for clean air, clean water, and reducing climate pollution. The real radicals are the anti-government extremists who would reverse 45 years of environmental progress.

This is a document aimed squarely at appeasing the party’s base. If nothing else, you have to credit the Republicans for their audacity. No wonder most of the GOP members of Congress who accept climate science are skipping the convention this year.