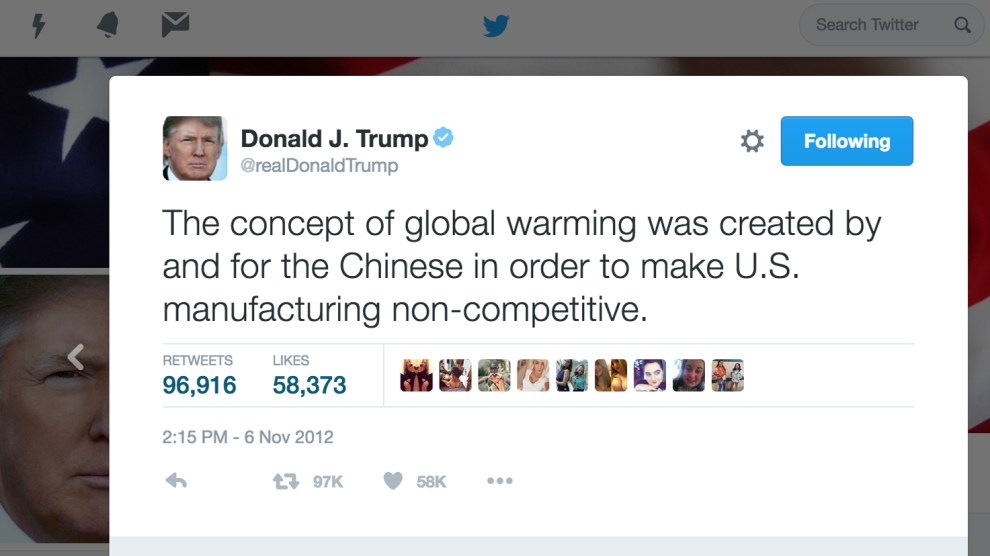 Two years after President Obama and Chinese President Xi Jinping announced that their countries would work together to combat climate change, Republicans and conservatives in the United States continue to cite China’s rising carbon emissions as a reason not to bother cutting our own.

Earlier this month, Donald Trump’s economic adviser Stephen Moore claimed that limiting our carbon pollution is pointless because of China’s supposedly growing coal dependency. “Every time we shut down a coal plant in the US, China builds 10,” Moore told E&E News. “So how does that reduce global warming?”

If China continues to cut its emissions, or even just keeps them at current levels, the country will be way ahead of its goal of peaking emissions by around 2030.

Not only is Moore’s statement simply untrue, but the broader conservative theory behind it is badly outdated. China’s coal use and carbon emissions have dropped for the last two years. In 2015, China cut its coal use 3.7 percent and its emissions declined an estimated 1 to 2 percent, following similar decreases in 2014.

If China continues to cut its emissions, or even just keeps them at current levels, the country will be way ahead of its goal of peaking emissions by around 2030, which it laid out in 2014 and recommitted to during the Paris climate talks last December.

In part, China’s emissions are dropping because the country is undergoing a dramatic shift in the nature of its economy. For years, China had been rapidly industrializing and growing at a breakneck pace. Growth often causes emissions to rise, all the more so when a country has an expanding manufacturing sector and is building out its basic infrastructure such as highways and rail lines. Heavy industrial activity—especially making cement and steel, which are needed for things like buildings, roads, and rail tracks—can be extremely energy intensive and have a massive carbon footprint. But now, as China is becoming more fully industrialized, its growth is slower and driven more by service industries, like technology, that are much less carbon intensive.

And the Chinese government is spurring this shift to a lower-carbon economy by reducing its indirect subsidies, such as favorable lending from state-controlled banks, for coal and other carbon-heavy industries. “This is actually a correction for the economy because China is adopting a more market approach,” says Ranping Song, an expert on Chinese climate policy at the World Resources Institute, an international environmental research organization. “That will have an impact on emissions.”

We can’t know whether Chinese emissions will continue dropping every year, but China is committed to improving the energy efficiency of its economy and the cleanliness of its energy sources, and it’s already off to a strong start. “There is a set of things happening in China that will continue to change the trajectory of its emissions,” says Jake Schmidt, director of the international program at the Natural Resources Defense Council.

Here are seven things China is doing to curb its climate-warming emissions:

Limiting coal use. Just a week after that 2014 announcement with Obama, China released an energy strategy that called for capping coal consumption by 2020. China also put a three-year moratorium on new coal mines, starting this year, and it’s been shutting down existing coal mines. Cutting back on coal not only reduces carbon emissions; it combats poor air quality, which has been causing serious health problems in notoriously polluted Chinese cities such as Beijing and Wuhan.

Carbon trading. Next year, China will launch a nationwide carbon market, the world’s largest. It will cover six of the biggest carbon-emitting sectors, starting with coal-fired electricity generation. This cap-and-trade program will build on programs China has already created in two provinces and five cities.

Cleaning up cars and trucks. China is the largest car market in the world. Cutting pollution from automobiles, like cutting pollution from coal plants, is essential not just to reducing CO2 emissions but to clearing the air in cities: The government estimates that roughly one-third of Beijing’s epic smog is from automobiles. China is pulling old, inefficient cars off the road, providing incentives for buying hybrids and electric cars, and enforcing stricter fuel-efficiency standards for new cars.

Making buildings more energy efficient. Two years ago, China started issuing requirements for buildings to be given energy-efficiency upgrades. The energy savings are just beginning to be felt, but given that buildings can last for decades or even centuries, there could be a long payoff period.

Building renewable capacity. China knows it needs alternative sources of energy to replace coal, so the government is investing heavily in developing wind and solar energy. “China has emerged as a leader in renewable energy,” reported Song and one of his colleagues in a blog post in April. “Investment soared from $39 billion to $111 billion in just five years, while electric capacity for solar power grew 168-fold and wind power quadrupled.” In Paris, China promised that at least 20 percent of its energy portfolio will come from non–fossil fuel sources by 2030.

Building nuclear reactors. Whatever you think of nuclear energy, it is one of the lowest-carbon forms of electricity out there. Earlier this month, China announced it will build at least 60 new nuclear power plants within a decade.

China will surely encounter hurdles and hiccups as it continues trying to rein in its emissions. The nation’s economy has recently been slowing down for cyclical reasons, as well as the structural ones mentioned above. After years of debt-fueled corporate investment and growth, Chinese companies are paying down their debts at the same time that the government is reining in industrial overcapacity and winding down the stimulus spending that got it through the Great Recession. China’s economy will eventually pick up again, and when it does, citizens will likely buy more cars, air conditioners, and electronic goods, leading to more electricity and gasoline use and perhaps greater carbon emissions.

But the policies China is enacting are designed to ultimately create a higher standard of living without more emissions. Since China has enormous low-lying cities that will be largely underwater in a century if climate change continues spinning out of control, the country has plenty of reason to curb its emissions and has shown that it is serious about doing it. That’s true whether Republican politicians in Washington choose to believe it or not.