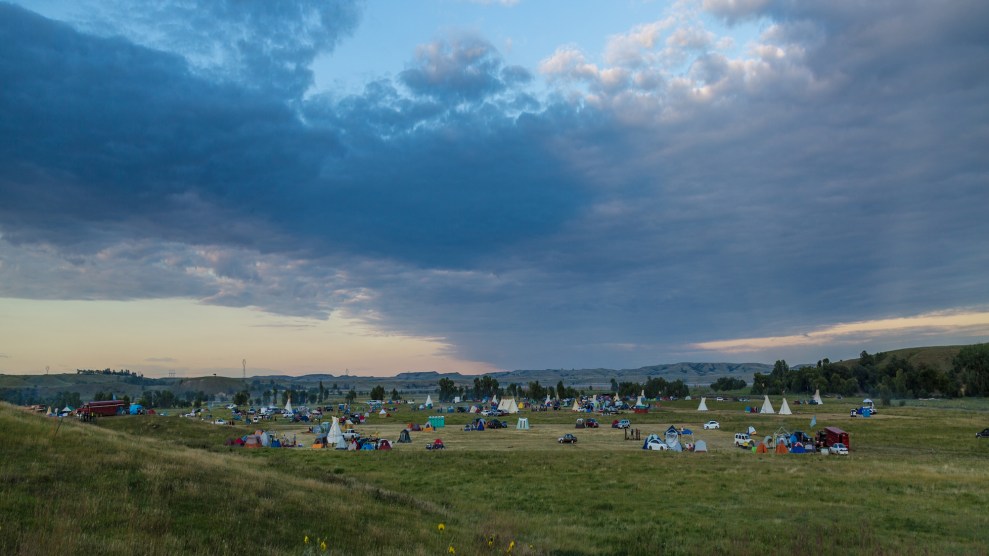 The Dakota Access Pipeline is a 1,172-mile conduit slated to carry crude oil from North Dakota to southern Illinois when it’s completed by the end of this year. Since its approval in late July, the project has sparked outrage. Last weekend, protests at the Standing Rock Sioux Reservation in North Dakota reached a boiling point, with reports of violent attacks on protesters by security dogs and numerous instances of macing.

After a video of presidential candidate Jill Stein spray-painting a Dakota Access bulldozer went up online on September 6, the Morton County Sheriff’s Department in North Dakota issued a warrant for her arrest. Though Stein is perhaps the most high-profile activist involved in these protests, many others have been sounding the alarm for more than a year. The Standing Rock Sioux, a Native group whose source of drinking water will be crossed multiple times by the pipeline, filed a lawsuit to block construction. Below is a timeline of how the enormous crude-oil pipeline and its opposition came to be.

The US Army Corps of Engineers (USACE), the federal government body in charge of the nation’s waterways, sends a letter to the Tribal Historic Preservation Office (THPO), initiating the permitting process. In accordance with the National Historic Preservation Act (Section 106), the Corps is required to consult with the interested tribes on the pipeline’s potential impact. THPO responds, requesting a full archeological investigation. THPO sends follow-up letters on February 25 and again on April 8, which allegedly go unreturned.

According to the Standing Rock Sioux’s lawsuit, a second form letter from the USACE finally arrives on September 15, asking once more if the Tribal Chairman would like to consult on the pipeline project. Again, the THPO responds, underscoring concerns about “significant and unevaluated properties” on the site, and its exclusion from the National Historic Preservation Act evaluation process. The THPO concludes that “it has become clear that the Corps is attempting to circumvent the Section 106 process.”

The Corps publishes an environmental assessment (EA), stating that “the Standing Rock THPO had indicated to DAPL that the Lake Oahu site avoided impacts to tribally significant sites.” The Corps eventually receives critical letters on the assessment from the Environmental Protection Agency, the US Department of Interior, and the American Council on Historical Preservation (ACHP). Other tribes whose ancestral lands are slated to be crossed by the pipeline voice their concerns, including the Osage Nation and Iowa Tribe THPO, who wrote to the ACHP: “We have not been consulted in an appropriate manner about the presence of traditional cultural properties, sites, or landscapes vital to our identity and spiritual well-being.”

Despite registering major concerns in the Section 106 evaluation process and stated misgivings from the ACHP, the Corps concludes the investigation, finding that no historic properties are affected.

The Corps issues the final fast-track permit (Permit 12) needed to continue pipeline construction in the 200-odd sites across four states in question. Even though the pipeline is slated to pass underneath the Missouri River half a mile upstream of the Standing Rock Sioux reservation boundary, the final environmental assessment concludes that there will be “no direct or indirect impacts.”

The Standing Rock Sioux, represented by Earthjustice, file an injunction, suing the Army Corps of Engineers and asking the court to compel the Corps to withdraw Permit 12. Eleven days later, Energy Transfer Partners, the parent company of Dakota Access LLC, sues the Standing Rock Sioux chairman and other tribal members for blocking construction.

Protesters help block the construction sites at Cannon Ball, North Dakota. The protests are led by the Standing Rock Sioux, who say their drinking water is immediately threatened by the pipeline. Tribal members from numerous tribes turn up in support. With protest numbers increasing to the thousands, Greg Wilz, division director of homeland security, orders the removal of state-owned water tanks and trailers that had been providing protest camps with drinking water. During a court hearing, pipeline officials claim the project is already 48 percent complete.

Dakota Access bulldozers plow a two-mile-long, 150-foot-wide path through what the Standing Rock Sioux say is a sacred tribal burial ground. The Sioux had contested the permits for that land in its lawsuit. “We’re days away from getting a resolution on the legal issues, and they came in on a holiday weekend and destroyed the site,” said Jan Hasselman, attorney for the Standing Rock Sioux. According to EcoWatch, the ancient site was discovered “only days before its destruction was awaiting review by the state historic preservation office.”

Protests continue on the anniversary of the Whitestone massacre, a day in 1863 when the US Army killed more than 300 members of the Standing Rock Sioux tribe. Video surfaces of private security attacking Native protesters with dogs and mace. At least 30 people were pepper-sprayed and six people, including a child, were bitten by dogs, according to tribe spokesman Steve Sitting Bear.

US District Judge James Boasberg agrees to temporarily halt construction on a portion of the pipeline—too late to save the Standing Rock Sioux burial ground, but enough to stop the bulldozers ahead of a more final ruling, expected September 9, as to whether construction will be allowed to continue. With members of more than 100 tribes represented, the protest is considered by some to be one of the largest Native American protests ever.

This is like nothing I’ve seen before. Tipis, lodges, tents, campers, everywhere. A small city. #StandingRock pic.twitter.com/uACswYSExc

Media access to the big camp at Standing Rock limited today. In the meantime, here’s a beautiful white horse. pic.twitter.com/LCBKoGr0zJ

Morton County, North Dakota, issues an arrest warrant for presidential candidate Jill Stein for her role in the protests, after a video of her spray-painting a Dakota Access bulldozer is posted online. The warrant charges her with two counts, one of criminal mischief and the other of criminal trespassing.

JillStein enjoying her civil rights–protest, graffiti, wrist-slap. Can’t enjoy same in Russia or even be in politics pic.twitter.com/Rk37tlRvnH

The Departments of Justice, the Interior, and Army issue a second joint statement, again refusing to authorize construction permits and requesting that ETP cease construction voluntarily. ETP defies the departments, choosing to go ahead with construction anyways.

Bernie Sanders and four Senate Democrats issue a letter to President Barack Obama, calling on him to suspend construction permits and compel the Army Corps of Engineers to complete a full environmental impact statement for the entire pipeline proposal. Journalist Amy Goodman of Democracy Now! announces she will turn herself over to North Dakota authorities to face a criminal trespassing charge brought against her for her role in reporting attacks on protesters. Documentary filmmaker and producer Deia Schlosberg is charged with felony conspiracy for her reporting on the protests. EcoWatch reports that the charges levied against her carry a maximum sentence of up to 45 years.