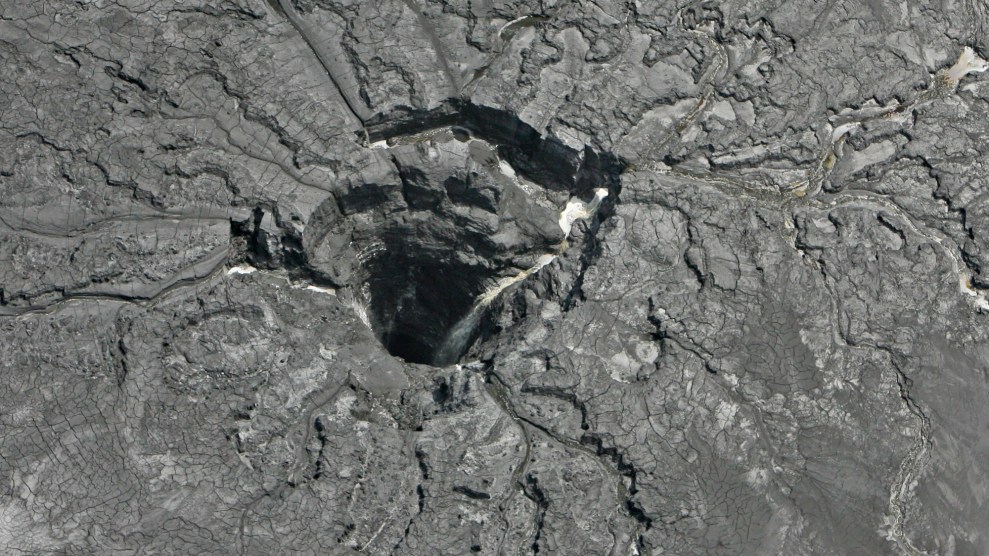 An aerial photo of the massive sinkhole that opened up underneath a gypsum stack at a Mosaic phosphate fertilizer plant in Mulberry, Florida <a href="http://www.apimages.com/metadata/Index/Sinkhole-Fertilizer-Plant/827b11cff6db41a6a8432fc8088b564a/3/0">Jim Damaske</a>/Tampa Bay Times via AP

About 30 minutes east of Tampa Bay, a 45-foot-wide sinkhole opened in late August, depositing at least 215 million gallons of polluted, slightly radioactive water into a vast underground aquifer. (That’s enough to fill more than 310 Olympic-size swimming pools.) The company responsible for the spill, fertilizer giant Mosaic, didn’t publicly disclose it until last Thursday, two weeks after it started. The company says it promptly informed the US Environmental Protection Agency and Florida state authorities about the fiasco, and it apologized Tuesday for not informing the public sooner, insisting that the fouled water had been contained and wouldn’t seep into nearby wells.

“Contamination can be very rapid. They must be working very hard to figure out where this is going.”

Bear with me: This strange event has everything to do with your food.

That’s because the breach occurred in a region known as Bone Valley, one of the the world’s most productive and valuable stores of phosphate rock, the feedstock for phosphate fertilizer, used to replenish farm fields from the US corn belt to Brazil to Europe. (Here’s more on the vexing geopolitics of the global phosphate market.) Florida’s phosphate deposits form an obscure but crucial hub in the global food system—they provide about 75 percent of the nation’s supply of phosphate fertilizer and about 25 percent of the world supply.

They’re essentially ecological sacrifice zones. In Bone Valley mines, cranes equipped with huge buckets (big enough to hold a van) scrape gashes into the land, removing as much as 50 feet of earth to expose the phosphate, which is then mined and processed into fertilizer. For every ton of product, the process generates five tons of a waste product called phosphogypsum, which contains low levels of radiation as well as a range of toxic heavy metals. The region already houses nearly 1 billion tons of phosphogypsum, and 30 million additional tons emerge each year. In Florida, no one knows what to do with the stuff, so it has been accumulating in huge piles known as gyp stacks, of which there are 22 in central Florida.

And it was on one of the gyp stacks that the sinkhole formed, unleashing that vast pond of tainted water. And while Mosaic claims the leak won’t contaminate the Floridian Aquifer, from which millions of people draw water, others are less sure. Here’s the Tampa Bay Times:

[E]xtracting all of the contaminated water and sediment before it spreads will be extremely difficult, said Robert Brinkmann, a professor of geology and environmental sustainability at Hof­stra University and author of Florida Sinkholes: Science and Policy. “That’s the bad thing about this: The aquifer is like Swiss cheese and it’s interconnected,” Brinkmann said. “Contamination can be very rapid. They must be working very hard to figure out where this is going.”

And Mosaic’s environmental track record is less than stellar. Last year, the company agreed to pay nearly $2 billion to settle a suit brought by the EPA over its stewardship of hazardous waste at six phosphate mines and sites in Florida and two in Louisiana.

At any rate, the sinkhole just east of Tampa Bay is a spectacular reminder of phosphate mining’s high ecological price tag. As I’ve written before, phosphorus fertilizer also generates trouble at the other end of the process—it leaches away from farm fields and feeds toxic algae blooms in freshwater, fouling lakes and even drinking water throughout the Midwest.