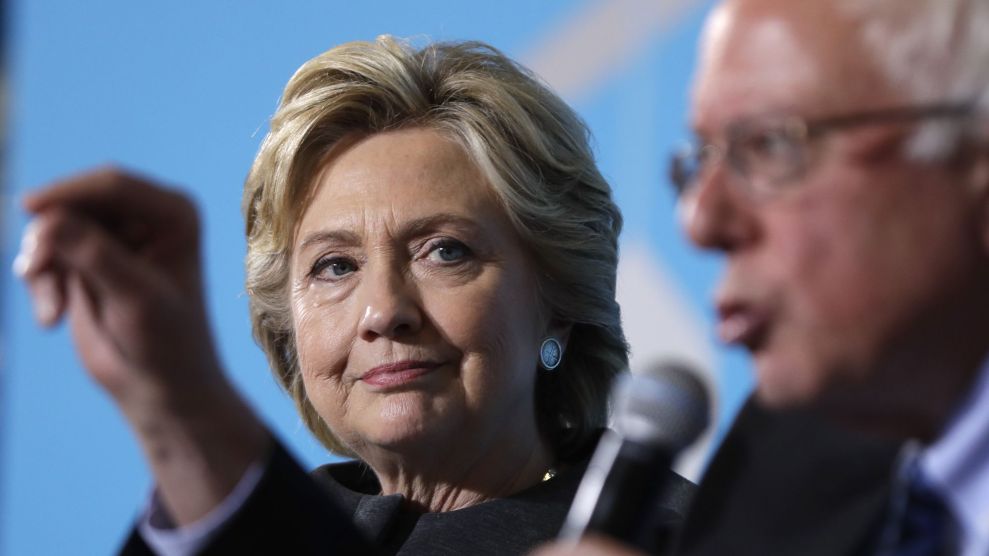 Neither Hillary Clinton nor Donald Trump will say whether they support the controversial Dakota Access Pipeline, despite increased protests and a letter Thursday from Sen. Bernie Sanders calling on the Obama administration to temporarily halt the project’s construction. Over the past several weeks, Mother Jones has called and emailed both campaigns about the issue; neither campaign has responded to our questions.

“Surely Hillary Clinton can rise to the occasion. Can’t she?”

In an interview with Grist Wednesday, Clinton’s campaign chair, John Podesta, avoided taking a specific stance on the pipeline: “I think she believes that stakeholders need to get together at this point,” said Podesta. “It’s important that all voices are heard.”

Protests over the 1,172-mile pipeline erupted again this week after Energy Transfer Partners, the company behind the project, resumed construction Monday morning. The pipeline, which would run from North Dakota to Illinois and cost $3.78 billion, has drawn criticism over its potential impact on the environment and the damage it could inflict to sacred grounds and water sources of the Standing Rock Sioux tribe. In late July, the tribe filed a lawsuit against the US Army Corps of Engineers, alleging that the agency failed to properly consult the tribes before approving the pipeline. On Sunday, a federal appeals court denied the tribe’s request to halt construction on the pipeline. The Obama administration repeated its request for Energy Transfer Partners to voluntarily suspend construction, but the company has disregarded that request.

On Thursday, Sanders and four other senators sent a letter to Obama asking him to direct the US Army Corps of Engineers to “require a full environmental impact statement for the Lake Oahe crossing of the Dakota Access Pipeline that includes meaningful tribal input.” The senators added that “the project’s current permits should be suspended and all construction stopped until a complete environmental and cultural review has been completed for the entire project.”

Following the release of the letter, Mother Jones once again contacted the Clinton and Trump campaigns to ask if the candidates agreed with Sanders’ position. Once again, neither responded.

Environmental groups have repeatedly called on Clinton to take a stance on the pipeline. “The fight at Standing Rock is a big damned thing. It’s a Flint-in-the-making, and it’s also a chance to for once do right by the continent’s oldest inhabitants,” wrote environmentalist Bill McKibben in a September op-ed. “Surely Hillary Clinton can rise to the occasion. Can’t she?”

Others have expressed similar sentiments. “Clinton…is supposed to be a Native ally,” wrote Gyasi Rossi, a lawyer and a citizen of the Blackfeet Nation, in an op-ed this month. “We deserve to know her position.”