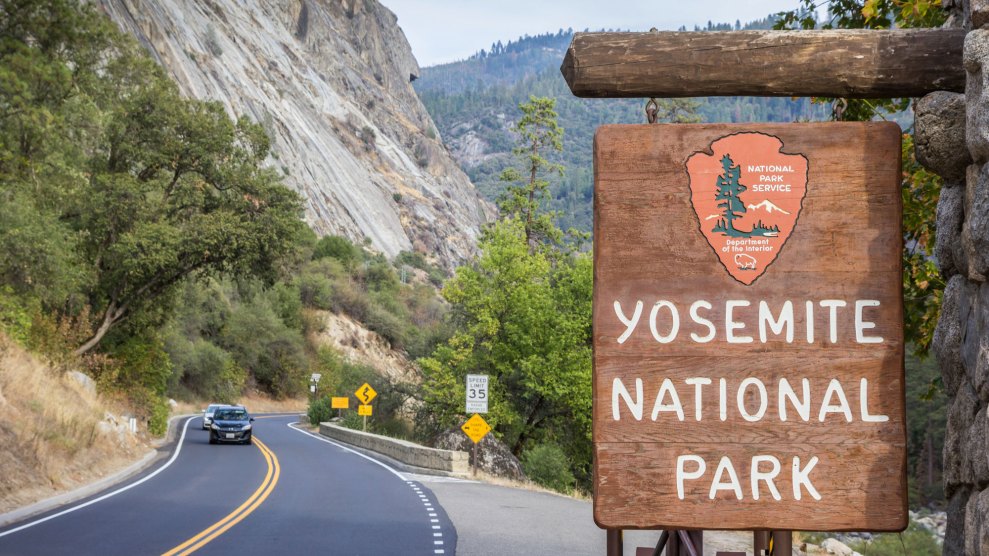 This summer the National Park Service celebrated its centennial with a much deserved bang. In the 100 years since its inception, the Park Service has protected more than 84 million acres of our nation’s most iconic environmental jewels, and it boasts 300 million visitors a year to 413 areas.

But beyond the grandeur of wild buffalo herds, rust-colored canyons, and redwood forests, the park system has played host to a decadeslong pattern of intimidation, discrimination, and sexual harassment against female researchers, rangers, and scientists in the field.

One former employee said she was stalked and spied on by another ranger while showering during a park ranger training.

In 2014, the Department of Interior’s Office of Inspector General (IG) launched an investigation after 13 former and current Park Service employees reported experiencing “discrimination, retaliation, and a sexually hostile work environment” spanning approximately 15 years in the Grand Canyon’s River District. Earlier this year the IG released a summary of its findings: In addition to the 13 employees who levied complaints, it identified 22 others who reported experiencing or witnessing “sexual harassment and hostile work environments” in the park.

Ongoing investigations led by the Park Service and the IG have revealed accusations across the Park System ranging from voyeurism to sexual harassment and exploitation to intimidation and retaliation for filing complaints. Late last month, the Committee on Oversight and Government Reform reviewed the IG investigations from numerous parks and concluded the Park Service had perpetuated a long-term pattern of sexual misconduct and harassment against female employees and their allies who reported incidences.

One of the most outspoken and high-ranking park officials to highlight the toxic work environment throughout the park system is Kelly Martin, the chief of fire management and aviation at Yosemite. Martin testified that she’d been subjected to harassment multiple times over the course of her 32-year career as a federal employee. During a park ranger training at the South Rim of the Grand Canyon in 1987, she was stalked and spied on by another ranger while showering.

Shaken, she immediately reported the incident to her superiors, who explained her options: choose to move on, file an Equal Employment Opportunity complaint, or file a criminal complaint. “I felt shame on how to proceed because I felt there would be backlash for reporting, and I did not want this to become public knowledge to other coworkers of mine,” she wrote in her testimony. “In the end, I decided that I did not want to be known and ostracized for filing a charge or complaint.” Management addressed the incident by requiring the perpetrator to apologize to Martin in a supervised meeting. In the hearing, Rep. Jason Chaffetz (R-Utah), who chairs the oversight committee, noted that years later this same ranger was arrested for peeping on women in a YMCA. The ranger recently retired from the Park Service as a deputy superintendent.

In a separate incident, another of Martin’s colleagues from the Forest Service took photos of Martin and kept them in the sun visor of his government vehicle. One day he cornered Martin in her office, pushed her against the wall and tried to kiss her. She managed to physically push him away and demanded he leave her office. “I did not report this to management, again fearing there were no witnesses and it would be his word against mine, and that no action would likely come of it, very similar to my previous incident,” she explained in her testimony. Later, when the perpetrator applied for a supervisory position in Martin’s chain of command, she informed the park’s deputy superintendent of the incident. While the perpetrator was not selected for the position, Martin left her post at the Grand Canyon to join the Forest Service in Idaho out of concern for her safety.

During a work meeting held in a private home with other Forest Service employees, Martin’s supervisor ran his fingers through her hair while sitting next to her on a crowded couch.

Despite the transfer, she was later harassed by a Forest Service employee as well. During a work meeting being held in a private home with other Forest Service employees, Martin’s supervisor ran his fingers through her hair while sitting next to her on a crowded couch. “The following day I discussed the incident with my immediate supervisor,” she said. “Within a couple of weeks, I received yet another apology from the perpetrator. When I brought this to the attention of Forest level senior leaders, his first comment to me was ‘Well, it’s your word against his.’ I was convinced at this point in my career that if I were to stay in federal service I would have to figure out how to navigate ubiquitous harassing and hostile work environments as a way of self-survival and preservation,” Martin said in a written statement to the oversight committee last month.

Other parks investigated for allegations of misconduct include Florida’s Canaveral National Seashore, Georgia’s Chattahoochee River National Recreation Area, Grand Canyon National Park, and Yellowstone National Park. “Why shouldn’t the public be led to believe that behind the redwoods, shenanigans are going on?” Rep. Gerry Connolly (D-Va.) said during the hearing. “People are being harassed—or worse—and nothing is being done about it.” The committee concluded that “misconduct often goes unaddressed and perpetuates an environment where bad behavior is condoned or covered up,” noting that  “individuals and supervisors guilty of misconduct or mismanagement are often promoted and/or allowed to retire with full retirement benefits.”

In light of the widespread complaints about the work environment at the national parks, members of Congress have called for Jonathan Jarvis, the director of the Park Service, to step down. (He’s expected to retire in January 2017.) Perhaps the biggest shake-up so far came when Don Neubacher, Yosemite’s superintendent, announced his early retirement at the end of September after the oversight committee laid out findings from an expedited inquiry conducted by the Park Service (the IG has since taken over the investigation) that found 20 employees who described Yosemite as a “hostile work environment as a result of the behavior and conduct of the parks superintendent.” Three days later, Patty Neubacher, a deputy regional director of the Park Service’s Pacific West Region and Don Neubacher’s wife, followed suit and announced her own abrupt retirement. Don Neubacher took his accrued vacation days until his retirement went into effect October 19. He could not be reached for comment.

The regional office issued this statement in response to the allegations at Yosemite:

The Park Service has begun to make changes as a result of the IG reports, including implementing mandatory special training for supervisors, appointing a new superintendent at Grand Canyon (the first woman to hold the position in the park’s history), and closing the Grand Canyon’s River District, where some of the most egregious accusation surfaced.

But some wonder whether these measures are too little too late. When Deputy Director for Operations Michael Reynolds assured the oversight committee that a survey was in the works to gauge how widespread sexual harassment is in the Park Service, Rep. Elijah Cummings (D-Md.) pointed to a similar survey that came out nearly two decades ago after allegations led to task force oversight but little change in the work culture. “Sixteen years ago, when folks were asked about sexual harassment, 76 percent of females in the US Park Service answered ‘yes’,” Cummings said. “This was 16 years ago. We got problems. And we got to correct them.”

“Sixteen years ago, when folks were asked about sexual harassment, 76 percent of females in the US Park Service answered ‘yes’,” Rep. Cummings said. “This was 16 years ago. We got problems. And we got to correct them.”

And the Park Service isn’t the only federal agency that’s faced allegations. In 2014, women from California’s US Forest Service division initiated the first steps in a potential class-action lawsuit detailing patterns of discrimination, sexual harassment, and retaliation at the hands of male colleagues. Earlier this year, reporter Kathryn Joyce chronicled the sexist, good-ol’-boy mentality that’s permeated both the Park Service and Forest Service and fostered an environment that’s contributed to victim blaming and inconsequential behavior since their inception.

Well into the ’70s, 98 percent of full-time employees at the Forest Service were men. The few female rangers on staff were required to wear skirts similar to stewardess uniforms and given badges different from those of their male colleagues, Joyce writes. Despite a 1981 “consent decree” in Bernardi v. Madiganto that “required the Forest Service’ California region to employ as many women as the civilian workforce–at least 43 percent in every pay grade,” the Forest Service has continued to face allegations of sexual harassment and discrimination. Today, women hold just 38 percent of superintendent positions throughout the Park Service and, according to High Country News, “less than 10 percent of park sites commemorate women or minorities.”

High Country News has reported at length about the misconduct throughout the park system and opened its own investigation into sexual harassment, sexual assault, gender discrimination, and the response in public land agencies. They’ve received more than 80 tips from former and current employees who have experienced or witnessed harassment or retaliation.

While park officials have vowed to strengthen their policies, the Committee on Oversight and Government Reform called for urgent change and managerial overhaul to purge “bad apples” and hold perpetrators accountable in order to change the toxic status quo. “You don’t need a policy change,” Rep. Trey Gowdy (R-S.C.) said in last month’s hearing. “You need handcuffs and a trip to the sex offender registry.”