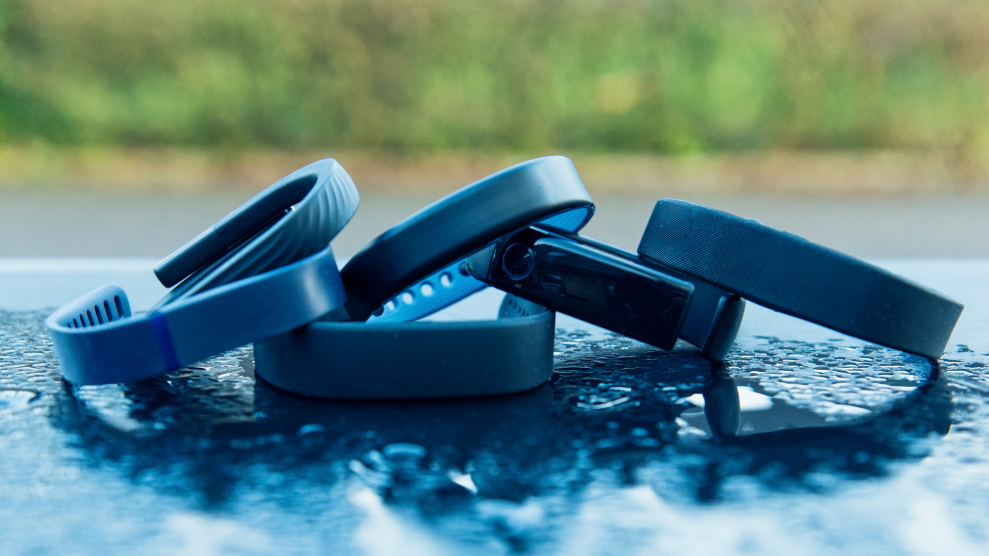 The makers of Fitbit, the wearable activity tracker, say the technology is “redefining fitness.” Lots of people have bought in: About 1 in 5 Americans own a wearable fitness tracker, like Jawbone, Garmin, or Fitbit. Big-name companies—BP, Bank of America, IBM, Target, Barclays—offer free or subsidized trackers to their employees in hopes of developing a healthy, active workforce. The wearable fitness tracker industry is expected to top $5 billion within three years.

“The notion you can give out a bunch of watches and suddenly people will get more active is just silly.”

And the need is clear: More than two-thirds of adults are overweight or obese.

The problem is, there is mounting evidence that when it comes to improving health, the trackers don’t work.

In a Lancet Diabetes & Endocrinology study published Tuesday, researchers tracked 800 people over the course of a year—some with Fitbits worn around their waists, some without. On average, those wearing Fitbits recorded a modest 16 more minutes of active physical activity than those without Fitbits, and no difference from the control group in health outcomes like weight or blood pressure. After a year, just 10 percent were still wearing the Fitbits. That finding echoes previous research finding that half of all fitness tracker owners don’t use them.

The study also looked at the effect of incentives: For the first six months, some Fitbit wearers were offered cash or charity donations based on reaching a certain number of steps. Those with the charity option didn’t exercise any more than those without; those with the cash option exercised slightly more, but not enough to affect health. When the incentive ended, they went back to their old habits.

Eric Finkelstein, a Duke-NUS Medical School professor and the study’s co-author, says having a fitness tracker is like having a scale in the bathroom—it can be a helpful measurement tool, but it’s not a public health intervention in and of itself. “The notion you can give out a bunch of watches and suddenly people will get more active is just silly,” he says.

The conclusions follow a recent study in the Journal of the American Medical Association finding that those who wore wearable fitness trackers lost less weight than those self-reporting their diet and exercise.

“People would say, ‘Oh, I exercised a lot today, now I can eat more.’ And they might eat more than they otherwise would have.”

The key issue, the authors of both studies say, is that trackers primarily measure steps, when in fact, the number of steps doesn’t matter as much as the amount of aerobic activity that will get you breathing hard. “If you just get 10,000 steps but are just trudging along, I’m not sure how those steps will have much health benefit,” says Finkelstein. He suspects that the goal of 10,000 steps, the default goal on today’s Fitbits, were calculated based on the federal government’s recommended 150 minutes of exercise per week. “So people sort of ran with this 10,000 steps number and took it a bit out of context.”

What’s more, Fitbit users can develop a false sense of achievement, said John Jakicic, a health researcher at the University of Pittsburgh and lead author of the JAMA, to NPR. “People would say, ‘Oh, I exercised a lot today, now I can eat more.’ And they might eat more than they otherwise would have.”

One improvement, says Finkelstein, would be tracking steps of aerobic activity rather than total steps on the device itself. (Fitbit tracks aerobic activity online.) Another approach is using the trackers as a measurement tool to complement fitness programs. Studies have shown that coupling trackers with counseling or personal training helps participants lose weight.

“As the leader in connected health and fitness, we are confident in the positive results our millions of users have seen from using Fitbit products,” said a Fitbit spokesman over email. “Numerous published studies, along with internal Fitbit data, continue to demonstrate the health benefits of using a fitness tracker combined with a mobile app to support health and fitness goals.” Fitbit points to the two studies involving counseling and personal training studies mentioned above, as well as to two small short-term studies of people with serious mental or physical illnesses.

So does this mean you should hold off on buying that Fitbit? “People who like to track these things, give it a go—I would say start out with a low-cost one,” says Finkelstein. But “don’t be surprised if in six months, you’re not using it.”

Correction: The original version of this article misstated the brand of fitness tracker used in the Journal of the American Medical Association study.