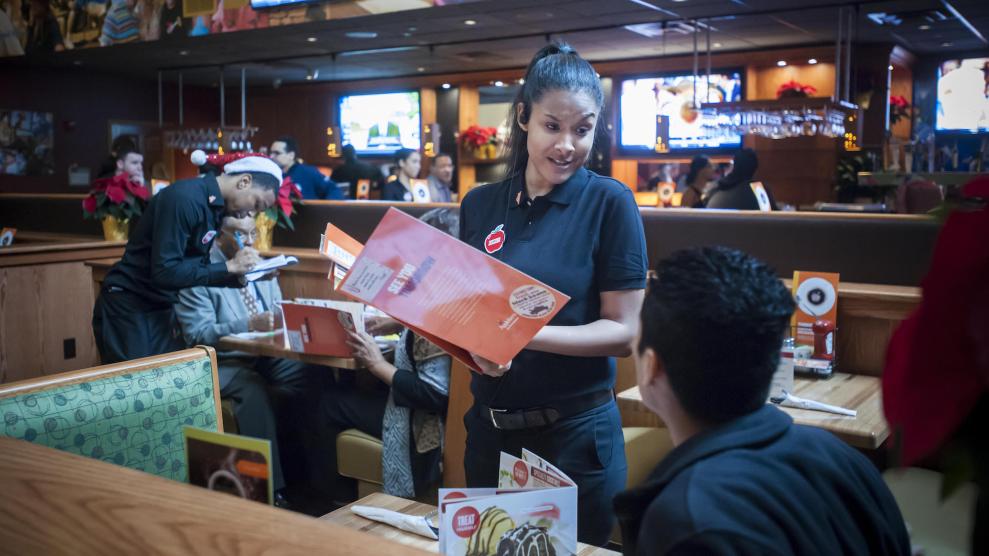 If you’re looking for something to savor after Tuesday’s bitter tidings, try this: Voters in Maine and Flagstaff, Arizona, opted to eliminate the lower wage for tipped workers.

As Maddie Oatman explained in an excellent piece a few months back:

The federal minimum wage is a paltry $7.25 an hour, but in 18 states servers, bussers, and hosts are paid just $2.13—less than the price of a Big Mac. This is known as the federal “tipped minimum wage” because, in theory, these food workers will make up the difference in tips. Twenty-five states and DC have their own slightly higher tipped minimums. The remaining seven, including California, guarantee the full state minimum wage to all workers.

Oatman shows how the practice of forcing workers to rely on tips in lieu of wages is rooted in post-Civil War racism and continues today to condemn millions of workers, the great bulk of them women, to sub-living wages. Here’s the tipped-minimum wage map that Oatman came up with for her piece. Note that before Tuesday, Maine and Arizona fell in the category of states that paid tipped workers more than the $2.13 hourly minimum but less than the minimum for regular workers, $7.25.

*Some of the wages shown in the above map are only for large employers.

In an interview, Saru Jayaraman co-director of Restaurant Opportunities Centers United, noted that tipped workers are “mostly single moms and disproportionately women of color, who suffer from the worst sexual harassment of any industry in the US” because they they have to rely on the whims of diners for compensation. “Donald Trump’s actions towards women—grabbing them, etc.—is what waitresses face on a daily, hourly basis,” she said.

Maine is now the the eighth state to eliminate the tipped minimum wage, Jayaraman said, and the “first East Coast state in US history to eliminate this legacy of slavery.” Next up, she added, One Fair Wage camapaigns are are happening in Massachussets, New York, Pennsylvania, Washingtin, DC, Michigan, and Illinois.

Earlier this year, Maddie and I interviewed Jayaraman for Bite podcast. Give it a listen. And  for more (mostly) positive election news, check out my roundup on food and farming ballot initiatives.