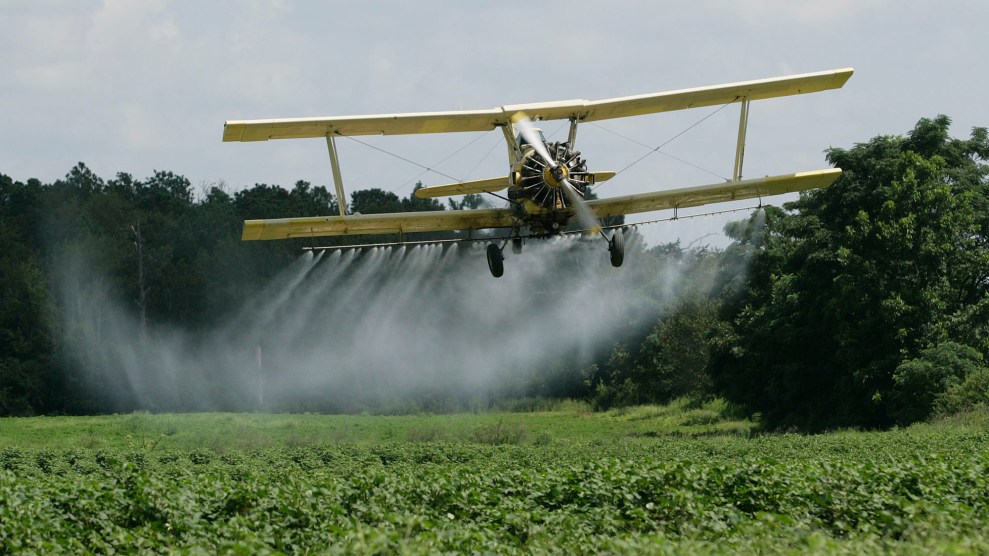 Like pesticides? Trump's got the right man for you. Dave Martin/AP Photo

To lead the transition of the Environmental Protection Agency, President-elect Donald Trump settled on notorious climate change denier Myron Ebell. The decision rattled climate activists—see Julia Lurie’s interview with Bill McKibben and David Roberts and Brad Plumer on Vox. But it isn’t just greenhouse gas emissions that are likely to get a free ride under an Ebell-influenced EPA. Farm chemicals, too, would likely flow unabated if Ebell’s agenda comes to dominate Trump’s EPA.

Ebell’s group dismisses the well-established existence of endocrine-disrupting chemicals as a myth conjured by “anti-chemical activists.”

Ebell directs the Center for Energy and Environment at the Competitive Enterprise Institute. The group runs a  website, SafeChemicalPolicy.org, that exists to downplay the health and ecological impacts of chemicals.

If the incoming EPA takes its cues from Ebell’s group, the agency’s coming decisions on some widely used farm chemicals won’t be hard to predict.

Take the class of pesticides called neonicotinoids. An ever-accumulating weight of evidence links declining honeybee health with neonicotinoids, which have exploded in use since the late 1990s. Yet CEI completely denies any harm to bees from the chemicals and rejects any role for government action in protecting bees.

The EPA has been in the middle of a long, slow review of the chemicals, produced by pesticide giants Syngenta and Bayer. In January 2016, the agency released its assessment of the most prominent one, Bayer’s imidacloprid, which is heavily used on cotton and soybean fields. The result: EPA scientists found the chemical so harmful to bee colonies, at the levels commonly found in cotton fields, that the agency “could potentially take action” to “restrict or limit the use” of the chemical by the end of this year, an agency spokesperson told me in an emailed statement. So far, the EPA has not taken such an action.

As for soybeans, a massive user of imidacloprid, the EPA simply lacked the data from Bayer and independent researchers to assess it—even though the pesticide has been approved for use since the 1990s.

The agency is committed to releasing a slew of other neonic assessments in 2017—and intervening to restrict their use if they harm honeybees. If the Competitive Enterprise Institute’s view of things holds sway, expect very little, if any, action to come of this effort.

Then there’s atrazine, perhaps the most controversial pesticide that’s used widely on US farm fields. Banned in Europe, it’s an endocrine disrupter, a term used for chemicals that mimic hormones and “produce adverse developmental, reproductive, neurological, and immune effects in both humans and wildlife,” according to the National Institute of Environmental Health Sciences.

Widely found in streams and drinking water near farms where it’s used, atrazine triggers sex changes in frogs at extremely low levels, according to research from University of California-Berkeley scientist Tyrone Hayes—work that has earned Hayes a long harassment campaign from the chemical’s maker, Syngenta.

Again, the EPA is in the middle of a slow, grinding reassessment of whether or not to restrict atrazine use. Don’t expect much from a CEI-influenced EPA. SafeChemicalPolicy.com’s atrazine page pitches it as a chemical with “low” risks and “high” rewards, and attacks Hayes. Another page dismisses the well-established existence of endocrine-disrupting chemicals as a myth conjured by “anti-chemical activists.”

So, Ebell’s group doesn’t just brazenly trash established science when it comes to climate change, to the delight of the fossil fuel industry. CEI provides the same service for the companies that dominate agrichemical production. And it’s not hard to see why. The center does not reveal its funding sources, but back in 2013, it allowed a Washington Post reporter to have a look at the biggest donors to its annual gala dinner that year. Predictably, the group got a nice cash infusion from petroleum, coal, and auto interests. But Big Ag chipped in, too: Pesticide/seed giants Monsanto and Syngenta each gave $10,000, as did their trade group, the Biotechnology Industry Organization.

President-elect Trump has been roundly mocked for running as a crusading reformer and then tapping a bunch of industry lobbyists and apologists like Ebell to lead his transition. Rather than “draining the swamp” in Washington, Trump seems to want to inject it with agrichemicals.