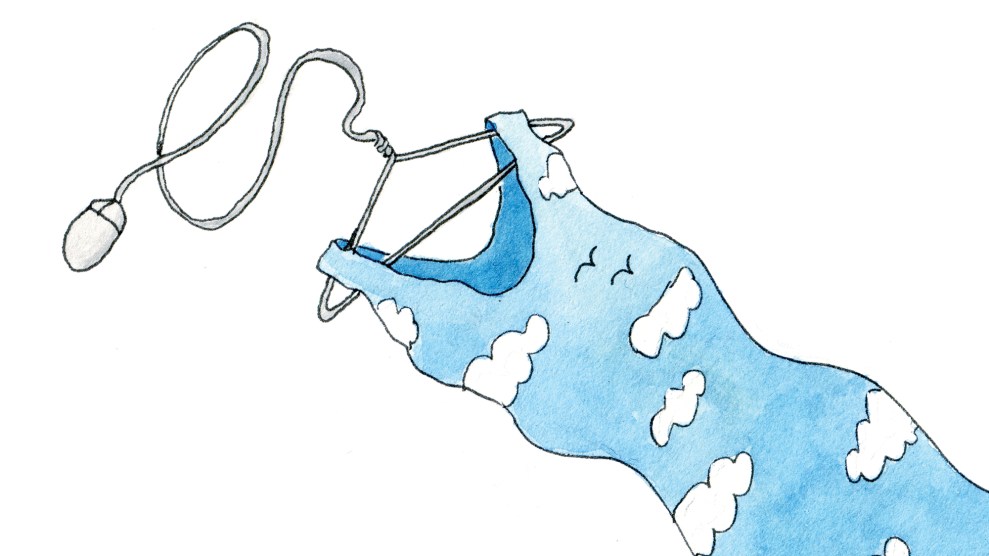 Last year, a friend of mine hosted a clothing swap. There were about 10 women and just a few rules: Bring clothes you want to get rid of. Take the items from your friends’ closets that you like, and the rest goes to the local thrift shop. The setup was an easy way to recycle the ridiculous number of garments in our millennial closets—we ditched items we hadn’t worn in months or even years and came away with some fresh, if worn-in, items, like the pair of American Apparel high-waisted cutoff jean shorts I left wearing.

I’m not as wardrobe-obsessed as the average American, who bought 64 articles of clothing and spent more than $1,100 on clothes and shoes in 2013. The average woman had just nine outfits in 1930. Today, her drawers are so stuffed she can wear a different getup every day of the month. Women only use about 20 percent of their wardrobes and typically wear an item just seven times before pushing it to the back of the closet. After that comes the landfill: Each of us discards about 80 pounds of textiles every year.

Fast-fashion stores like H&M and Forever 21 have made it easy to buy and dump outfits at record speed. In fact, between the time I wrote this story and when it hit the newsstands, the industry took women through upward of 10 new trends. This endless march of cheap off-the-shoulder blouses and oversize T-shirt dresses can also be bad for workers, as manufacturers have cut costs by outsourcing production to sweatshops abroad. Ninety-seven percent of our clothes are made abroad, sometimes in exploitative or even deadly conditions, points out Elizabeth L. Cline in her book, Overdressed. “If we’re going to shop in this way that’s so obsessed with novelty,” she says, “how can we do that in a way that’s not so destructive?”

So my friends and I were clearly on to something. And as it turns out, so is a small but growing corner of the fashion world. The best-known example may be Rent the Runway, a New York-based subscription company that lets you choose clothes you like online and ships them to your house. When you’re over an outfit, you mail it back, and it’s shipped out to the next person who’s had her eye on it.

With fashion rental services, instead of 20 women each buying identical shift dresses from Zara, they can share one.

Since it was founded in 2009, Rent the Runway—which started as a service just for formal wear but has since expanded to include office and casual outfits—has raised $126 million from venture capitalists. It recently moved into a 160,000-square-foot warehouse and now has more than 6 million members. It’s no surprise that a handful of competing companies have cropped up. Le Tote, an online shop that offers a similar clothing rental service, recently raised $27.5 million. An app called Curtsy lets you rent from your neighbor or classmate. These new clothiers are “asking customers to put their closets into the cloud,” says Jennifer Hyman, CEO and co-founder of Rent the Runway.

The so-called “Netflix for clothing” model clearly cuts down on waste—instead of 20 women buying identical shift dresses from Zara, they can all share one. And when Rent the Runway retires an outfit from rotation, the company sells it or donates it to charity instead of throwing it out.

But there are downsides, too: Fashion subscription services require repeated cleaning and shipping. Many companies dry-clean items between wearers; no one wants a shirt with the lingering smell of someone else’s BO or cigarettes. That process typically involves chemical solvents like perchloroethylene, which can leach into groundwater and has been linked to neurological problems, acute loss of coordination, and liver tumors in mice. The Environmental Protection Agency classifies this chemical solvent as a “likely” carcinogen. Rent the Runway claims its dry-cleaning facility is the largest in the country, and that instead of perchloroethylene it uses a nonhazardous alternative. Brett Northart, the co-founder of Le Tote, told me that his company employs a cleaning technique somewhere between dry cleaning and laundry to reduce the volume of chemicals used, though he declined to divulge details.

The jury is still out on whether online shopping creates more carbon emissions than brick-and-mortar retailers, and fashion subscription services require double the shipping, since customers send their boxes back when they’re done. There’s also packaging to consider: When you buy a shirt online, more than half the carbon footprint is from the cardboard, tissue paper, or plastic used to ship it.

Rent the Runway sends its clothes in a reusable garment bag, which it says saves an estimated 287 tons of shipping waste each year. But the bigger win of the clothes-sharing model, says Cline, is how it changes the way we think about our closets. “It’s hard to imagine us getting back to a place where people only buy things they plan to wear for the rest of their lives,” she told me. But if we can kick the habit of wearing an outfit once and then tossing it, that’s major progress. “People are starting to use [rental sites] as a substitute for buying new, and that’s really huge.”