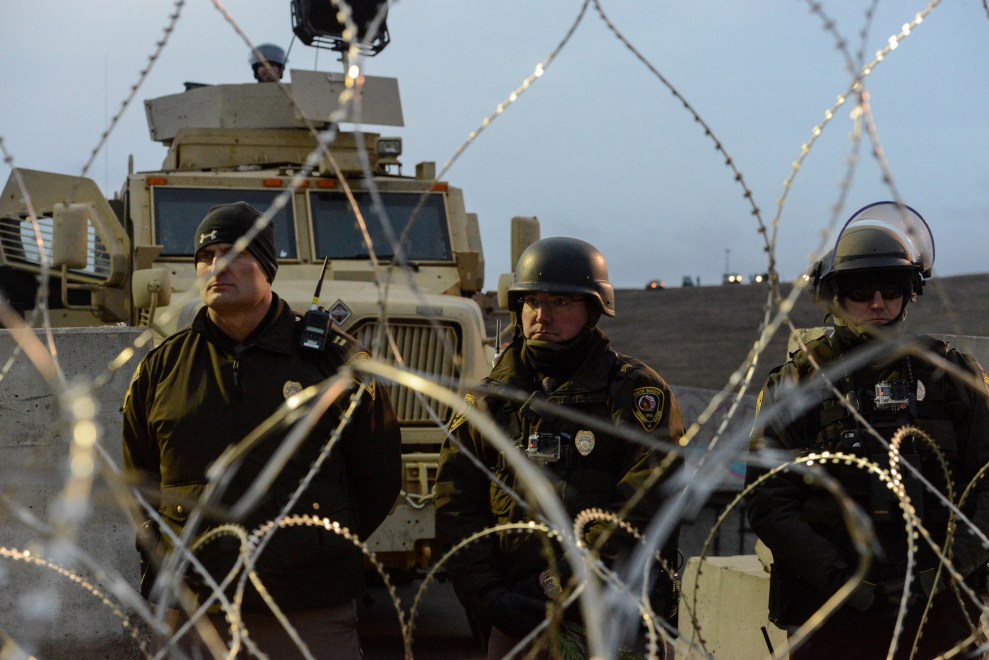 When protests at the Standing Rock Indian Reservation began in April, there were only a handful of activists camping out in defiance of the Dakota Access Pipeline project. As their numbers have grown into the thousands, so has the police presence confronting them. Police departments from 24 counties and 16 cities in 10 different states (including North Dakota) have poured into Standing Rock, according to the Morton County Sheriff’s Department, the local law enforcement agency.

It’s rare for police forces to cross state lines to handle problems in neighboring places, much less travel more than 1,500 miles to respond to protests, as the St. Charles Parish (Louisiana) Sheriff’s Department has. So why is Standing Rock teeming with cops from across the country? The answer lies in an obscure federal law that’s usually deployed to help states deal with environmental disasters.

North Dakota Gov. Jack Dalrymple said the state has asked for contributions from the federal government, the pipeline company, “and any entity we can think of.”

In 1996, then-President Bill Clinton signed the Emergency Management Assistance Compact (EMAC). The statute was created in response to Hurricane Andrew, which wrought an estimated $25 billion in damages when it hit Louisiana and Florida in 1992, necessitating large-scale, interstate relief coordination. EMAC, an agreement eventually entered into by all 50 states, allows for states to share resources and coordinate emergency personnel in case of a crisis. The good-neighbor style law was invoked for disaster relief for Hurricane Sandy in 2012 and, more recently, Hurricane Matthew in 2016.

Governors have almost always employed EMAC in the wake of natural disasters, but the bill contains a stipulation that makes it applicable during other types of emergencies including “community disorders, insurgency, or enemy attack.” On August 19, when North Dakota Gov. Jack Dalrymple declared a state of emergency at Standing Rock, he relied on this language to issue an EMAC request.

Per DeSmog Blog, Standing Rock is one of the few times that EMAC has been called upon to respond to social activism. In April 2015, during Black Lives Matter protests in Baltimore in the wake of Freddie Gray’s death while in police custody, Maryland Gov. Larry Hogan declared a state of emergency and sent out an EMAC request. About 300 state troopers from Pennsylvania and another 150 from New Jersey responded. The city racked up an estimated $20 million in extra policing costs.

Since the state issuing the EMAC request is on the hook for the tab, North Dakota taxpayers will pay for the out-of-state officers at Standing Rock. This will include wages, overtime costs, meals, lodging, and mileage reimbursement. On November 2, North Dakota officials agreed to borrow $4 million to cover escalating policing costs and extend the state’s line of credit for emergency law enforcement to $10 million. (The state was already staring down a $1 billion revenue shortfall in 2016.) Gov. Jack Dalrymple said state officials have asked for contributions from the federal government, the pipeline company, “and any entity we can think of,” though the federal government has thus far declined to pitch in. North Dakota Emergency Services spokesperson Cecily Fong told the Associated Press that total state law enforcement costs for the protests had reached $10.9 million as of November 22, while Morton County had spent an additional $8 million. Meanwhile, local courts and jails have struggled to process about 575 arrests.

The increased law enforcement presence at Standing Rock has coincided with mounting concerns over police brutality. The deployment of military-grade equipment, including land-mine-resistant trucks and armored personnel carriers, as well as the use of pepper spray, rubber bullets, and alleged strip searches led Standing Rock Sioux tribal chairman Dave Archambault II to ask the Justice Department to investigate civil rights abuses. “Local and state law enforcement have increasingly taken steps to militarize their presence, to intimidate participants who are lawfully expressing their views, and to escalate tensions and promote fear,” Archambault wrote in his letter.

Police departments answer EMAC requests on a voluntary basis. Some forces, like Minnesota’s Hennepin County Sheriff’s Department, have been deployed to North Dakota amid objections from their local communities. Others are withdrawing from the action. A phone-banking and email-writing effort led Montana’s Gallatin County Sheriff Brian Gootkin to turn his detail around before they even arrived at Standing Rock. Gootkin told Yes Magazine that people who contacted his department expressed concern that EMAC was meant to address natural disasters and catastrophic events, not for protecting a corporation’s pipeline construction. Sheriff Dave Mahoney from Wisconsin’s Dane County, who withdrew his force after one week, said he did so after talking with “a wide cross-section of the community who all share the opinion that our deputies should not be involved in this situation,” he said. “We have enough priorities here in our community to address.”