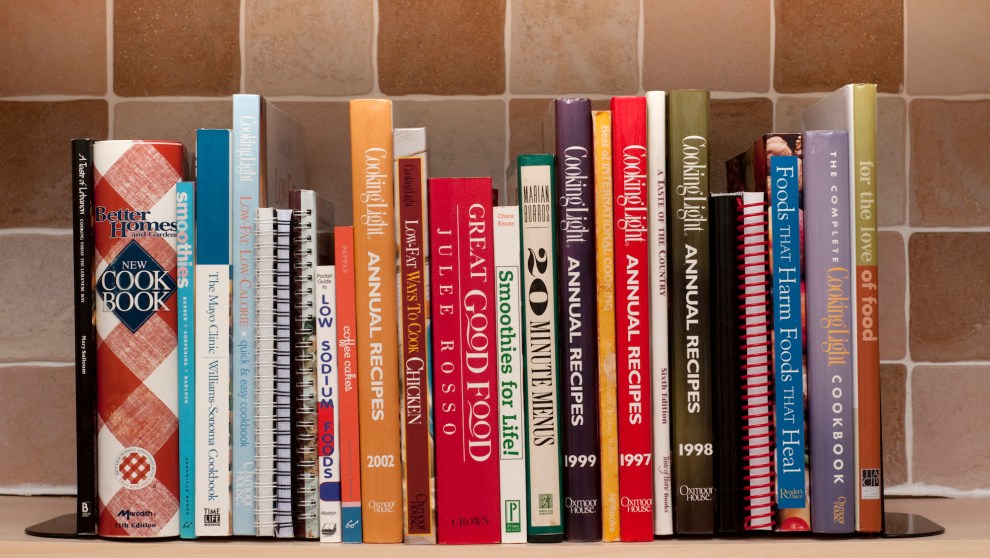 I’ve been collecting cookbooks for (at least) 20 years, and I basically taught myself to cook amid sauce-splattered tomes. But even though I still love leafing through them for inspiration, I’ve found myself turning to them less and less for specific direction in the kitchen over the years. Why? On the Guardian website, the Australian chef Adam Liaw articulates a fundamental problem with recipes, the building blocks of cookbooks:

Recipes teach a modern style of cooking that is focused solely on eating meals, to the exclusion of kitchen craft and home economics. Making a simple dish that’s over and done with in under an hour is all well and good, but it is also a very inefficient way to cook.

In other words, most recipes invite us to think of cooking projects in terms of discrete meals: a pork roast that feeds six, a veggie pasta for four. But as Liaw notes, “No cuisine in the world could ever have been created in discrete packages.” A standard Japanese meal, for example, rests on three elements: soup, rice and pickles. “To make that from scratch three times a day would be impossible, but with good kitchen craft it’s possible to eat a full meal every time with a minimum of effort,” he writes.

But here in the United States, the single-meal recipe reigns supreme: in cookbooks, on food websites, and in the food section of newspapers. When you exit work and remember the empty fridge at home, the prospect of cooking dinner in that style can be daunting: You have to settle on a recipe, hit the grocery store, spend at least 30 minutes cooking, and other 20 to 30 minutes cleaning. Meal-kit services like Blue Apron remove the burdens of choosing a recipe and shopping for it; but they still keep you on the one-dinner-at-a-time treadmill. Considering the ever-increasing demands of work and the demands of family life, it’s no wonder that we’re spending more and more of our food dollars on meals prepared outside the home.

As Liaw notes, “No cuisine in the world could ever have been created in discrete packages.”

But imagine another, more long-viewed style of cooking. Say on Sunday, you cooked a pot of beans, roasted a whole chicken (tip: butterfly it), and whipped up a simple vinaigrette as a salad dressing and marinade. Monday’s dinner could be a quick chicken-bean soup; Tuesday could be taco night; Wednesday, these elements could be incorporated along with some quick-sautéd vegetables into a pasta; and so on. If you have nice condiments around—say, sauerkraut, or (my longtime obsession) dead-simple homemade salsa macha—these fast-assembled meals are all the more satisfying.

This mode of cooking is also thrifty: Whole chickens are much cheaper than parts, and the leftover carcass can be transformed into next week’s stock. And a pot of homemade beans costs significantly less than canned beans (which are themselves a worthy component of a quick meal). No bottled salad dressing can match the flavor and price of a homemade one, which lasts in the fridge for at least a week. Under such a regime, restaurants and takeout can be utilized sparingly, to satisfy cravings for dishes you can’t cook at home, not as an expensive crutch.

Tamar Adler’s evocative An Everlasting Meal (2012), not a cookbook but a collection of essays, captures the pleasure and rhythms of this mode of kitchen stewardship. More recently, the US cookbook market is starting to take note of the flaw Liaw identifies. In my list of the five best cookbooks of 2016, two strove to be more than just one-off recipe collections, offering a more systematic approach to putting food on the table. In Home Cooked: Essential Recipes for a New Way to Cook, Anya Fernald makes the case for “long cuts”—”time-consuming base ingredients made when time and ingredients are abundant, then preserved to be used when they are needed.” And in A New Way to Dinner: A Playbook of Recipes and Strategies for the Week Ahead, Amanda Hesser and Merrill Stubbs (of Food52 fame) structure their book around cooking just as I describe above: weekend shopping trips and  cooking sprees that give rise to a week’s worth of varied and fast-prepped dinners.

Both books are excellent—but are geared to an audience of seasoned gourmets weary of the tyranny of the one-meal-focused recipe. (The “new way” of cooking they promise in their titles isn’t really new, of course, but it has been widely forgotten in our recipe-fixated food culture.) We need more, and simpler, systems-focused cookbooks, geared to people with less experience in the kitchen. Maybe some already exist—if you know of good ones, let me know in comments. And of course, there’s no need to purge your home of conventional cookbooks or stop visiting recipe websites—most one-shot recipes produce results that can be incorporated into a variety of meals for the week.

It would also help if we revived home economics classes in high schools, focusing on the skills of running a thrifty and time-efficient home kitchen. I made just such a plea back in 2013.