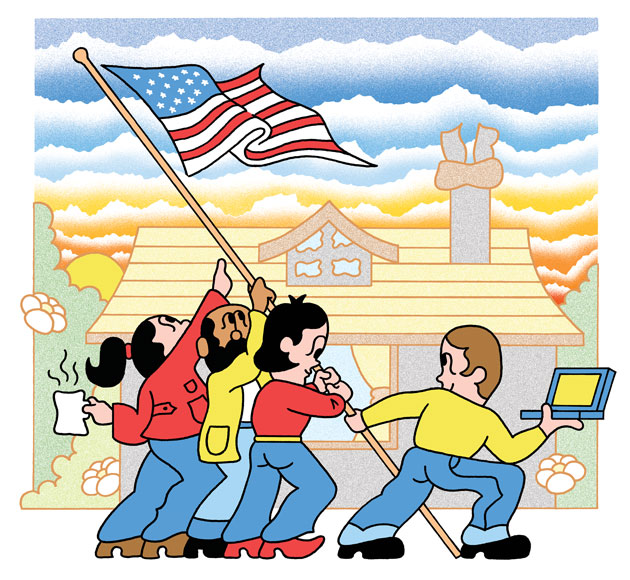 At the dawn of the Donald Trump era, good ideas are being traded on how to fight back, stand up for marginalized people, and defend the planet: Run for the local school board. Donate to Planned Parenthood. Support investigative reporters (ahem).

Here’s one you might not have considered: Ask your boss to let you work from home.

Take climate change. President Trump’s pick for the Environmental Protection Agency is a climate science denier, but you don’t need the EPA to tell you that the hours you spend in traffic are hurting the planet. Transportation accounts for a quarter of all US greenhouse gas emissions each year—the equivalent of 1.8 billion metric tons of carbon dioxide—mostly from cars, pickups, and other light trucks. If a chunk of people chugging gas to the office were able to log in from home instead, would it make a difference?

About 135 million Americans commute to work, and according to a 2016 survey by research firm Global Workplace Analytics (GWA), 50 percent of them have jobs they could do remotely at least part time. If all those workers skipped the commute just every other day, we could reduce greenhouse gas emissions as much as we would by taking 9 million cars off the road.

Transportation accounts for a quarter of all US greenhouse gas emissions each year.

Lots of people hear “work from anywhere” and imagine either startup techies in chic coffee shops or bloggers in ratty PJs sitting on worn-out couches. But major employers across a wide range of industries have gotten in on the act; some even help employees set up fully connected home offices. Xerox, Aetna, and American Express came out on top in a 2014 survey of companies with the most flexible remote options for workers. By 2020, Dell hopes that half its workforce will be doing at least some remote work. A report released by the company in June 2016 found that thanks to telecommuting, 35,000 US employees each saved the equivalent of one metric ton of carbon dioxide on average every year—even when you consider the extra energy required for heat and lights in a home office.

More than 4 percent of US employees work from home, and the remote population is growing. In 2015, a Gallup poll found that 37 percent of US workers had telecommuted, up from just 9 percent 22 years ago. (Though some of this may be due to logging in from home in the evenings and on weekends in addition to showing up at the office for a normal workday.)

According to data from the US Census Bureau, Americans spent roughly 1.7 trillion minutes commuting in 2012. And that’s not counting the time to get dressed up, find keys, and pack a lunch. Working from home can mean getting that time back, and being around for meals, doctor appointments, and school functions. That kind of flexibility makes for happier employees, says Sara Sutton Fell, who runs FlexJobs, a company that connects employers with remote workers. “There’s tremendous opportunity for companies to lead in these areas,” she says.

John Pflueger, who heads environmental strategy at Dell, says his company started promoting remote work after seeing demand for work-life balance rise among new recruits. The GWA survey found that 80 to 90 percent of US employees want to work remotely at least part of the time.

And yet few Americans get the benefits of a flexible work schedule—even after the birth of a child or during a health emergency. That’s why Ivanka Trump took a page from Hillary Clinton’s playbook and proposed six weeks of paid maternity leave. Though Clinton proposed a lot more, that’s better than the current federal law, which only guarantees unpaid time off. (Of 185 countries surveyed by the United Nations, only Papua New Guinea has a similar policy.) But the Trump proposal is just for moms. It does nothing for dads and folks caring for aging parents or sick loved ones.

A group of researchers found that for low-income people, the longer their commute is, the less likely they are to vote.

So employees have to fend for themselves. Brittany Clark, 28, lives in Fort Worth, Texas, and works remotely for an online photo-printing service called Chatbooks. She was a stay-at-home mom for her two young kids until bills got tight. A relative told her that Chatbooks recruits parents for its 34-person customer service department, which is entirely remote and lets employees set their own schedules.

On a typical day, Clark might log off and take her kids to the zoo, making up the time once they’re in bed. She stays in touch with her co-workers through Slack, a popular business messaging app. “Working from home for a good company is a lot of moms’ dream come true,” she says. “There’s nothing I feel I’m not doing.”

If the environmental and having-it-all arguments aren’t enough, here’s something else remote work could help: democracy. Remember, fewer than 80,000 people in three states pushed Trump across the finish line. If more employers let people work remotely, fewer ambitious college grads around the country might flock to places like New York and Los Angeles. More people might consider moving from coastal enclaves to swing states—a trend that could help bridge the divide between disparate groups of Americans.

What’s more, a group of researchers found that for low-income people, the longer their commute is, the less likely they are to vote. And another study shows that no other daily activity brings out as many negative emotions as the morning commute—not dealing with the kids, cleaning the dishes, or even being at work. When you’re already stressed out and annoyed, finding the energy to engage politically is just that much harder. Get out the vote by staying home? It’s an idea.