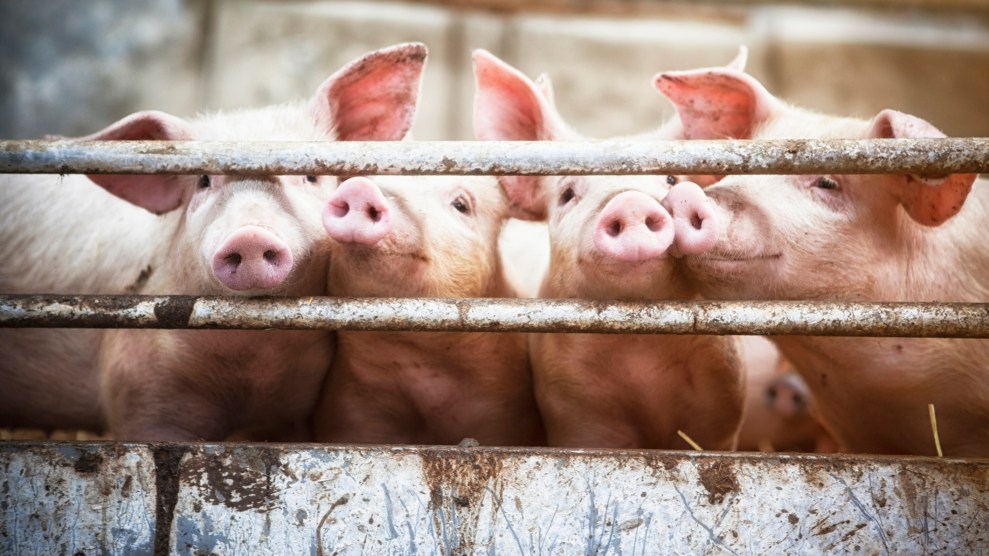 Last week, fast-food poultry giant KFC joined McDonald’s, Chipotle, Panera Bread, and 11 other major chains in promising not to serve poultry raised with antibiotics. The announcement came after years of pressure from consumers and advocacy groups concerned about the spread of antibiotic-resistant bacteria. Because of the move, by next year, more than half of the chicken we eat in the United States will likely be free of antibiotics.

“Obviously they’re trying to change the subject,” one expert said of the Pork Council’s statement.

That’s a big deal: As my colleague Tom Philpott has reported, nearly two-thirds of all the antibiotics in the United States go to agriculture. Antibiotic use in agriculture increased by 22 percent from 2009 to 2014. The rampant overuse on farms means that bacteria adapt, become resistant, and can breed superbugs that pose a global threat to human health. The Centers for Disease Control and Prevention called antibiotic resistance “one of the world’s most pressing health concerns.” Last fall, an elderly woman in Nevada was the first person to die of a strain of Klebsiella pneumoniae that resisted “all available antimicrobial drugs.”

Now that chicken sellers are flocking away from antibiotics, advocacy groups have set their sights on another item on Americans’ dinner plates: pork. The Natural Resources Defense Council took the lead in putting pressure on the chicken industry for about three years—and the organization is now mobilizing to do the same with others. The campaign is timely: Late last year, researchers found bacteria on a hog farm in the United States that was resistant to carbapenems, antibiotics known as the “last line of defense.” A resistant strain of E. coli was found in pigs in China, where half the world’s hogs reside, the year before.

Pork producers, meanwhile, insist there’s not much to worry about. In a statement last week, the National Pork Producers Council told Politico’s Morning Ag, “It’s important not to be misled by activist claims that antibiotic use in animal care results in its presence in consumed meat. When they are used, US pork producers stop giving antibiotics to animals for a set period of time prior to marketing so consumers don’t have to worry about antibiotics in their meat.”

But Erik Olson, director of health and environmental programs at the Natural Resources Defense Council, points out that the pork industry seems to be missing the point: Health officials aren’t as worried about traces of antibiotics in the meat as they are about superbugs.

Olson argues that ridding hog farms of antibiotics wouldn’t be reinventing the wheel. Producers in Denmark have phased out their use, as have a few in the United States. Niman Ranch, formerly owned by meat entrepreneur Bill Niman and now owned by Perdue, doesn’t use antibiotics at all.* (Tom Philpott wrote about Perdue’s endeavor to raise antibiotic-free chicken.)

Olson also points out that antibiotic-raised meat is swiftly falling out of fashion. A recent marketing survey found that 66 percent of consumers ranked a “no added antibiotics” label as a “very important” factor in their food-buying decisions. “The writing is on the wall for the industry,” said Olson. “This is what consumers are demanding.”

Correction: An earlier version of this article incorrectly characterized Niman Ranch’s use of antibiotics. The company never uses antibiotics.