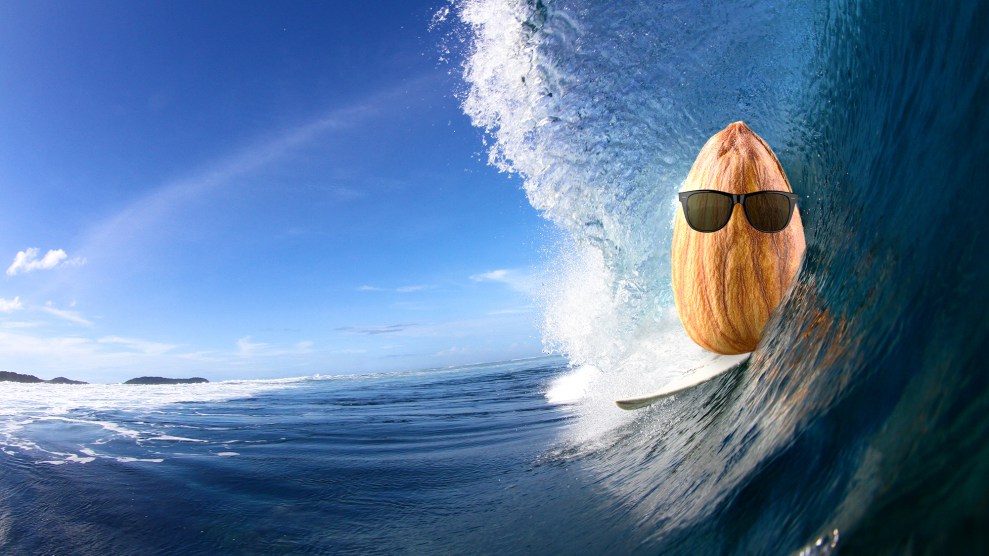 California’s water problems sleep with the fishes, who are thrilled.

Governor Brown did not praise the drought Friday. He buried it. It will spend the rest of eternity entombed in the ground, forced to watch helplessly as its mortal enemy, groundwater, flows resurgently.

Over the years many pages of this august publication have been dedicated to the drought. (It was often noted by the Mother Jones bureaus in DC and NYC that the San Francisco bureau appeared “obsessed” with the drought, which led to this passive-aggressive headline) Though my colleagues in California knew this was coming—the writing was on the wall—they are in shock. And jubilation has erupted in their office. Reports are coming in from Slack that the almond-fueled celebration could continue well into the weekend.

Why are they celebrating with almonds? Because almonds did the drought and if you ate almonds while the drought was going on you are a bad person. But now the drought is over and the almonds, they rain from the sky like kisses from heaven! And the almond milk! My god, the almond milk, once a controversial hipster indulgence, now flows like the roaring rapids of the Colorado river. A new era of cheap broccoli hedonism dawns!

Here is a list of some of the things we said you were not allowed to do because of the drought which you now can in fact do.

6. Have dairy of any kind, but specifically Greek yogurt.

9. Not be a total asshole to your neighbor.

10. Eat vegetables during the winter.

13. Enjoy a complimentary glass of water at a restaurant.

Let me tell you a story. In 2014 in an editorial meeting people were talking about the drought and I asked “where did the water go?” and they all laughed. “Ha ha,” they said. “Ha ha ha.” And I said, “I don’t think you know.” And they said, “everyone knows.” And I said, “where is it? There used to be water, now it’s gone. Where is it?” And they flipped the table over and stormed out, never answering my question. We have published a lot of really great stories about the drought since but none answering the question. I have encountered many theories. There was the theory of the blob and that the water was in the ocean. Maybe it was stuck in a cloud above the ocean. Maybe it was in France. Because here’s the thing, the water didn’t disappear. It’s somewhere. To find the water, you have to think like the water. What place had more water than before? I thought it might have been Seattle, but Seattle actually had a drought too. So, what do you think? You’ve been reading this paragraph and think I’m stupid. You’ve been chuckling along because you know where the water is. So, where is it? I want you to think in your mind where you think the water went. Maybe you think it is an unanswerable question. If that is what you think then I have a surprise for you: Researchers at Stanford, I recently found out, answered the question. I now know where the water went and I’m going to tell you where the water is and none of you will have guessed accurately. Ready? It’s in Alaska.