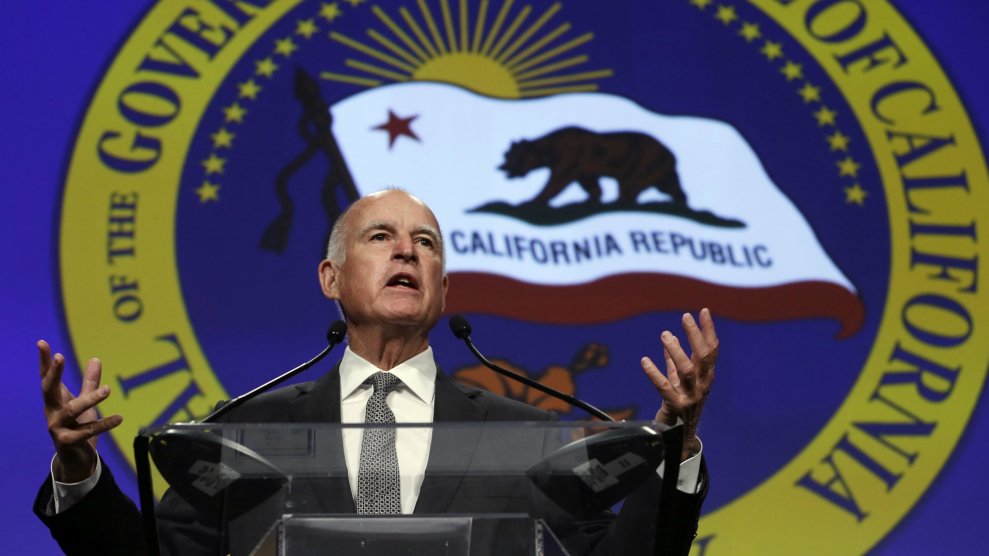 It’s a precarious time for federal climate change action in the US, to say the least. Just last week, a sweeping executive order signed by President Trump moved to roll back the Obama administration’s flagship Clean Power Plan to curb greenhouse gas emissions from power plants—the latest in a series of efforts by Congress and the White House to repeal various Obama-era rules.

But even as the Trump administration continues reversing federal environmental regulations, state governments are stepping up as the nation’s new front line of defense against climate change. The same day as last week’s executive order was revealed, Gov. Jerry Brown of California and Gov. Andrew Cuomo of New York released a joint statement reaffirming their commitment to curbing their states’ carbon emissions.

“Climate change is real and will not be wished away by rhetoric or denial,” the statement said. “We stand together with a majority of the American people in supporting bold actions to protect our communities from the dire consequences of climate change.”

California and New York currently maintain some of the nation’s most ambitious state-level climate action plans, including goals in both states to reduce their greenhouse gas emissions 40% below their 1990 levels by the year 2030, and 80% by the year 2050. Both states also have plans for the advancement of clean energy and energy efficiency programs, and both participate in carbon pricing schemes—California has had its own statewide cap-and-trade program since 2012, and New York is one of nine northeastern states participating in a joint cap-and-trade scheme known as the Regional Greenhouse Gas Initiative.

“We stand together with a majority of the American people in supporting bold actions to protect our communities from the dire consequences of climate change.”

These goals are even more ambitious than the federal targets previously set by the Obama administration, which pledged to reduce U.S. emissions by 26-28% below their 2005 levels by the year 2025.

But New York and California are hardly the only states in the nation with climate action plans in place. In fact, states and even cities began creating their own climate mitigation strategies even before the federal government began to act on climate change, according to Serena Alexander, a professor of urban and regional planning at San Jose State University who has conducted research on the effectiveness of state-level climate action plans.

“Generally speaking, there’s a lot of creative, innovative pieces of legislation in the nation,” she said.

Washington state, for instance, has an existing goal of reducing its greenhouse gas emissions down to 25% below their 1990 levels by the year 2035—and the state Department of Ecology has recently recommended that this goal be increased to 40% below 1990 levels. And Colorado released a comprehensive climate action plan in 2015 outlining recommendations for action across a variety of sectors, including energy, transportation and agriculture. Like other states, it’s also introduced legislation that would require utilities to generate a certain percentage of their electricity—in Colorado’s case, 30%—from renewables by the year 2020.

Altogether, 34 states, including both red and blue states, have adopted some form of a climate action plan, according to the Center for Climate and Energy Solutions. Many of these plans involve concrete emissions reduction goals, such as those laid out by New York, California and Washington, although they differ in the ambition level of these goals, as well as their plans to achieve them.

Because of their ability to create jobs and improve the economy through the expansion of renewable energy and energy efficiency programs, these plans are often able to transcend partisan boundaries—which is hardly the case lately at the federal level. Massachusetts’ climate action plan was first instituted in 2004 under conservative Republican governor Mitt Romney, Alexander pointed out, adding that “if you take a look at that plan, it mostly focuses on job creation.”

And there’s reason to believe that, on the clean energy front at least, states will continue to enjoy bipartisan cooperation. A November report from the Georgetown Climate Center highlights the milestones in clean energy expansion at the state level in recent years, including in highly conservative states like Louisiana. It would seem that state governments are generally more capable of looking past the partisan quibbles that tend to be associated with climate action at the federal level, instead evaluating climate mitigation strategies based on their potential economic benefits.

And in addition to their leadership in clean energy and their individual emissions reduction goals, some states have attempted to pursue other, even more aggressive climate mitigation efforts.

Several states, for instance, have proposed legislation that would implement a state-wide carbon tax, a carbon pricing scheme widely acknowledged by economists as one of the most effective potential means of encouraging a reduction in carbon emissions. In Washington state, a proposed carbon tax made it all the way to the ballot for November’s election, but ultimately failed to pass.

Despite all of these recent efforts, though, Alexander points out that for climate action at the state level, “the progress is slow, and the near-term targets are low.” Not everyone is as ambitious as New York and California. South Carolina, for instance, has set a goal of reducing its greenhouse gas emissions to just 5% below their 1990 levels by the year 2020, and has set no longer-term targets.

This means that, even as states are becoming the new front-runners for climate action in the U.S., their efforts will likely still not be enough to offset an absence of federal action by the Trump administration.

“There are certain areas where we need higher-level governments to get involved.”

“Going back to the question of whether state-level or local level action is sufficient, I believe the answer is no,” Alexander told Fusion. “There are certain areas where we need higher-level governments to get involved.”

The Paris climate agreement, for instance, hinges on emissions reduction commitments made by national governments. Even if all states with climate action plans met their near-term goals, it would not be enough for the nation as a whole to fulfill its pledge under the Paris Agreement. And many experts have also suggested that a lack of federal involvement could potentially weaken other nations’ commitment to the treaty.

That said, pushing the federal government for increased climate mitigation efforts is one more way states can make a difference under the Trump administration, according to Michael Burger, executive director of the Sabin Center for Climate Change Law at Columbia Law School.

“Litigation will play an essential role during the Trump administration, both in holding the line against federal deregulation and in pushing the federal and state governments to take action,” Burger said in an email. “We have already seen states and environmental groups sue to block Trump’s initiatives.”

Indeed, a coalition of states and local municipalities led by New York Attorney General Eric Schneiderman has already issued a statement vowing to “protect those we serve—including by aggressively opposing in court President Trump’s actions that ignore both the law and the critical importance of confronting the very real threat of climate change.”

And just a few days ago, Schneiderman’s office also announced the commencement of a lawsuit against the Trump administration for delaying energy efficiency standards for certain consumer products.

At the signing of last week’s executive order on energy independence, which unravels the Obama administration’s Clean Power Plan and lifts restrictions on federal coal leasing, President Trump remarked that “we are returning power to the states—where that power belongs. States and local communities know what is best for them.”

But if the states have anything to say about, a plan for tackling climate change may be what they demand. In addition to the joint statement issued by the governors Brown and Cuomo, another group of six states—including California and New York, but also Oregon, Connecticut, Minnesota and Washington, along with a handful of mayors within those states—also issued a statement last week decrying the federal government’s recent actions.

“As Washington, D.C. delays, the work to reduce greenhouse gas emissions in our cities and states continues,” they stated. “Our commitment to limiting global average temperature increase to well below 2 degrees Celsius remains. We will not waver. And we will continue to enlist like-minded cities, states, regions and countries around the world to join this fight.”