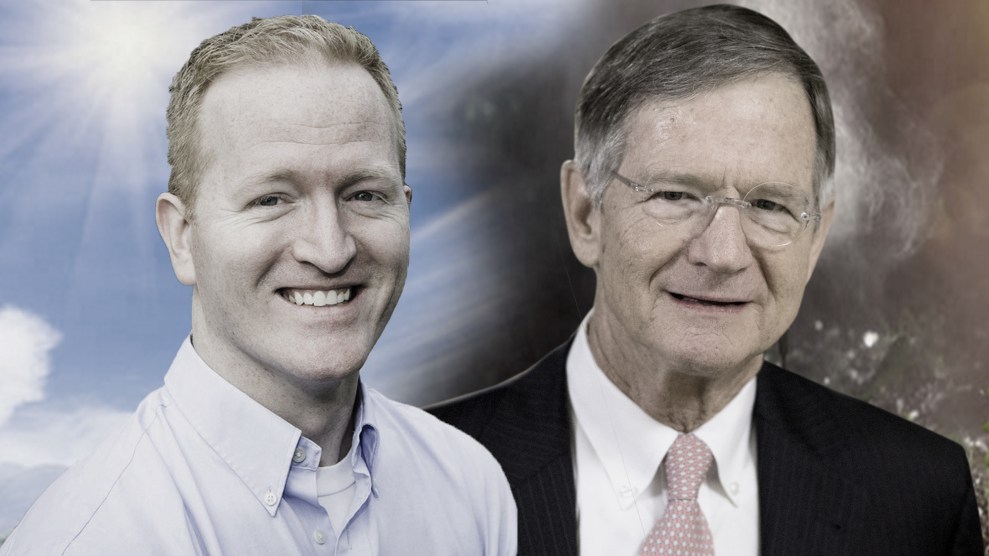 When Derrick Crowe moved back to Texas after working on Capitol Hill for six years, he thought that he was done with national politics.

“Having worked on the Hill extensively, you get a pretty good idea what life is like if you’re a member of Congress,” says Crowe, who served as congressional staffer for House Democratic Leader Nancy Pelosi (D-CA), Rep. Charlie Stenholm (D-TX), and Rep. Adam Smith (D-WA). “It’s a difficult life, and it’s difficult for your family.”

Nevertheless, the 36-year-old native Texan and self-proclaimed “science nerd” now finds himself reentering the political stage, this time running for Congress himself in a climate-oriented campaign to unseat one of the most ardent climate change deniers in Washington, Rep. Lamar Smith (R-TX).

“Things have gone too far in this district and in this country for me to stand on the sidelines,” says Crowe in a statement announcing his bid for Texas’s 21st Congressional District—an area that includes parts of Austin, San Antonio, and a large swath of the Texas Hill Country. “We don’t have much time to avoid truly catastrophic impacts by changing our behavior and energy use here in the United States,” he says. “And Lamar Smith is blocking every single one of those efforts.”

“We don’t have much time to avoid truly catastrophic impacts by changing our behavior and energy use here in the United States. And Lamar Smith is blocking every single one of those efforts.”

Far beyond simply rejecting the science surrounding climate change, Rep. Smith seems to have made it his personal mission to go after any scientist that disagrees with him—which is 97% of the scientific community when it comes to climate science. As chair of the House Committee on Science, Space and Technology, Smith has used his nearly unlimited powers to subpoena—as well as the committee’s Twitter feed—to effectively “troll” and intimidate federal scientists, accusing many of rigging climate data. Since assuming the chairmanship, he has issued over 50 subpoenas and has also used his powers to shield ExxonMobil from investigations by New York and Massachusetts Attorney Generals over allegations that the company may have buried global warming data.

“Climate change is perhaps the greatest threat we now face as a civilization,” Mann says. “For politicians to intentionally confuse the public about the reality and threat of climate change is essentially an act of treason.”

But for Smith, who believes that the greatest threat we face is a “liberal media bias,” scientists like Mann are not reliable sources of information. In fact, during one remarkable speech on the House floor, the Texas congressman went so far as to suggest that the “the only way to get the unvarnished truth,” might be to get it from President Trump himself.

Antics like these combined with Trump’s overall efforts to roll back environmental protections, ultimately convinced Crowe to run for office against Smith. “Every indication shows that the planet is warming at an escalating rate, and instead of escalating alarm from our political system we are seeing an escalating denialism,” says Crowe. “I just couldn’t tolerate it.”

Born and raised in Sunray, a small town in the Texas panhandle, Crowe graduated from Texas Tech University with a degree in political science. After working for six years in Washington, he returned to his former home in Austin with his wife Laurie to raise their newborn son. Today, Crowe serves as the communications director for the SAFE Alliance, a non-profit that works with victims of domestic violence and sexual abuse.

Describing himself as an, “unabashed nerd and unapologetic advocate for science and reason,” Crowe has spent much of his free time over the past two years working as a climate organizer in Austin. He rattles global warming statistics off the top of his head, while offering some surprisingly specific policy solutions like implementing a carbon fee and dividend program and focusing on renewables.

Voicing a sense of urgency lacking in Washington today, Crowe worries about what the future will be like for his two-year-old son, Henry. “To cut right to the chase, if we don’t have carbon emissions slashed to nearly zero by the time my son graduates high school, we will virtually guarantee that we’ll see catastrophic climate changes in our lifetime,” he says.

“To cut right to the chase, if we don’t have carbon emissions slashed to nearly zero by the time my son graduates high school, we will virtually guarantee that we’ll see catastrophic climate changes in our lifetime.”

Crowe’s campaign comes amidst a nationwide movement to get scientists and climate advocates into office, a counterpoise to the Trump administration’s anti-science agenda. Several organizations such as 314 Action, Climate Hawk’s Vote, and the newly founded Lead Locally have sprung into action, recruiting, funding, and training scientists and environmentalists in the rigors of political campaigning.

While the 2018 midterm elections are still 18 months away, a number of scientists have already responded to the widespread discontent visibly demonstrated across the country during last month’s marches for science and climate action. More than 400 people signed up on 314 Action’s recruitment form within the first two weeks of opening, including Jess Phoenix, a California volcanologist who plans to challenge one of Smith’s colleagues on the House science committee, Rep. Steve Knight (R-CA),.

“If not scientists, if not people who really understand what’s at stake, then who’s going to step up,” Phoenix said in an interview with The Washington Post. Rep. Night along with Rep. Smith and Rep. Dana Rohrabacher (R-CA) make up a trio of politicians specifically targeted by 314 Action for their climate views.

Although Crowe is not a scientist, he believes his combination of political experience and environmental activism makes him the right man for the job. However, for a liberal progressive running in a traditionally conservative district that has voted Lamar Smith into office 16 times in a row, beating the longstanding incumbent will be challenging.

“There’s no illusion that this will be easy,” Crowe admits, but as he points out there are signs that Rep. Smith’s hold on the district may be slipping.

Last year, Smith’s hometown paper, The San Antonio News-Express, withdrew its longstanding endorsement of the congressman, over what the editors called an “abuse of his position as chairman of the House Science, Space and Technology Committee.” “Specifically, it is his bullying on the issue of climate change that should concern all Americans,” wrote the paper’s editorial board. Smith won the election without the paper’s endorsement, but with only 57% of the vote – the first time that he had dropped below 60%.

This may mean that the race for Texas’s 21st district will be closer than ever before, and Crowe hopes that Trump’s radical policies will continue to energize progressive Democrats and perhaps even sway a few moderate conservatives to his cause. Nationwide, there have been some surprisingly close special elections in traditionally Republican districts that some say indicate this sort of anti-Trump backlash may already be taking form.

“We are going to talk to every person we can find and convince people that the time is now to have some faith in the political system and drive these folks from office,” Crowe says, and unlike his opponent, he pledges not to take any contribution from corporate PACs.

According to data collected by the Center for Responsive Politics, Smith has received over $700,000 from oil and gas over the course of his political career. Unsurprisingly, he has consistently voted in favor of fossil fuel projects, supporting the expansion of offshore drilling and the opening of new oil refineries, while voting against tax cuts for renewable energy and blocking measures that would curtail the billions of dollars in government subsidies given to the fossil fuel industry. Rep. Smith could not be reached for comment on this article.

“It shouldn’t be lost on anybody, that he is serving other masters besides his constituents,” says Crowe, who himself grew up next to a refinery in Sunray now owned by one of Smith’s big donors, Valero. He remembers how terrible it smelled, joking, “it smelled like money.”

“I don’t expect to beat Lamar Smith ever in the fundraising race,” he says. “But we will be able to offer a much more compelling message and be able to motivate voters in a way that corporate money can’t.”

Crowe isn’t the only one looking to take Smith down, and at least seven other Democratic candidates have announced their intention to run for the 21st district—an emergency physician Ryan Allen, entrepreneurs Joseph Kopser and Elliott McFadden, defense lawyer Chris Perri, political activist Rexi Melton, pastor Rev. Mary Wilson, and Thomas Wakely, who lost against Smith last October with 36% percent of the vote.

With such a competitive field Crowe knows it’s going to be a tough race, but he is encouraged by the support he has received already. Still, even if he doesn’t win, he admits it’s the effort that’s important. In the end, this race is a personal one. “I really see myself standing for a livable future for my kid,” Crowe says. “If the worst happens, I can’t be the person that doesn’t have a good answer when he asks me, what I did.”