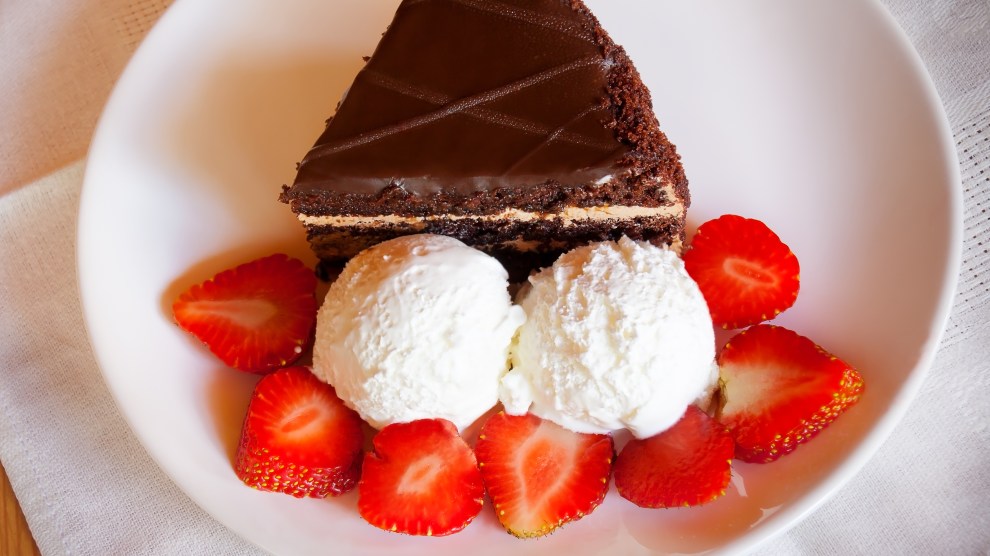 This week’s political news has left me feeling panicky. The more I scroll Twitter, the more often I find myself craving my favorite snacks: chocolate chip cookies and canned Diet Coke.

I’m not alone in my attachment to specific foods for certain moods. Studies suggest that when we’re sick, tired, sad, or stressed, we often eat in aims of feeling better. And given this year’s political climate, some of us may be experiencing an extra strong hankering for a greasy slice of pepperoni pizza or fresh buttercream frosting. A Market Watch survey of food businesses on election night showed spikes in cupcakes, wine, pizza, and other junk food orders.

On a recent episode of our food politics podcast, Bite, we asked listeners to tell us what dishes they’re turning to under the Trump administration.

There’s some science to suggest that we’re wired to crave certain kinds of foods in times of duress. Common comfort foods usually include a salty, sweet, or fattening element. A study by University of Colorado medicine professor Richard Johnson argues that our preference for these flavors may trace back to our early development as humans. To our Paleolithic ancestors, sweetness was a sign that a fruit was ripe and safe to eat. The excess calories helped us put on weight. “Foods that were good for survival are often things that are cemented in your neural pathways as being good for you, so you want more of them,” said San Diego Miramar College anthropology professor Laura González, who has researched emotional eating and comfort foods.

The stress response is similar. The moment we feel threat or impending doom, our bodies are flooded with chemicals that can affect our appetite and metabolism. Hormones like cortisol and ghrelin flood our system and, for some people, increase appetite and caloric intake. It’s common to look for that boost in calorie-dense dishes. “Foods that we turn to in times of stress reward the pleasure centers of our brain,” González said. “So they actually produce more dopamine and more serotonin.”

In González’s research on emotional eating, she found people linked favorite foods with memories of childhood, family, and holiday traditions. She noted that people across various cultures often reach for warm food. Harvard anthropologist Richard Wrangham’s theorizes that once our ancestors starting using fire to cook, they used less energy to digest, leading to stronger bodies and bigger brains—in short, cooked foods is what made us human.

It’s possible that Donald Trump himself isn’t safe from the effects of stress on appetite. During a recent visit to the White House, Time reporters noted that the president was the only one to receive extra sauce on his entree and two scoops of vanilla ice cream with his chocolate cream pie.

Here are some more favorite comfort foods from the Twittersphere:

I felt really depressed today, so I ate a whole bunch of chocolate. It cheered me up quite a lot. Chocolate seems to be the answer.