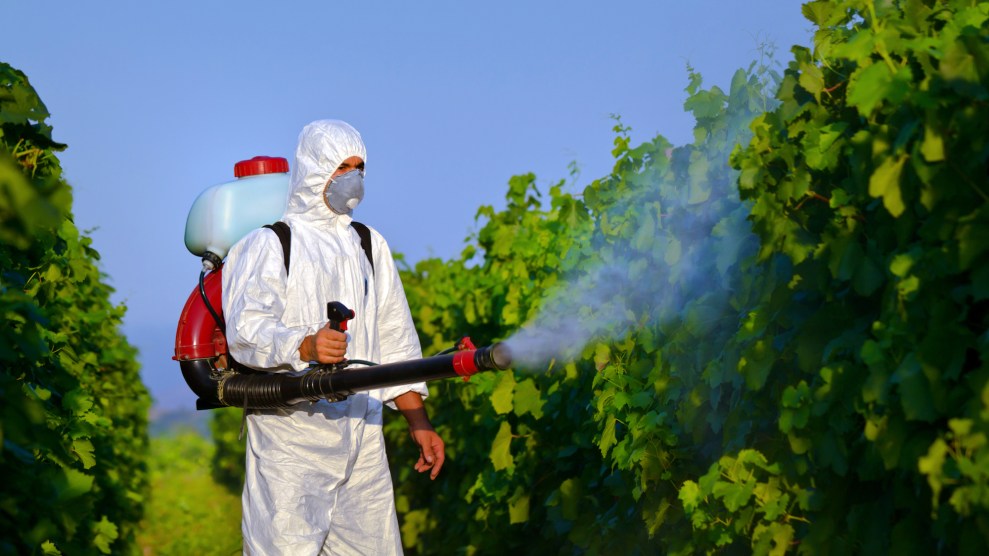 Back in March, the Environmental Protection Agency abruptly reversed its own decision to ban a highly toxic insecticide called chlorpyrifos—an endocrine-disrupting chemical that is strongly suspected of hindering brain development in kids, even at tiny exposure levels. Turns out, the EPA wasn’t done running interference for the chemical, a big seller for agrichemical giant Dow Agrosciences.

Just days before, at least 12 farmworkers were sickened by a highly toxic pesticide that drifted from a nearby field—and county officials suspect it was chlorpyrifos.

On Monday, the agency shelved a proposal, originally scheduled to go into effect on March 6, intended to ensure that such poisons are safely applied. It was supposed to regulate “restricted use pesticides,” which the EPA defines as ones with the “potential to cause unreasonable adverse effects to the environment and injury to applicators or bystanders without added restrictions.” Examples (list here) include chlorpyrifos and atrazine, a widely used herbicide linked to sex changes in frogs and cancer in people.

Currently, anyone who applies pesticides on the restricted-use list has to have safety training. The proposed rule would have required workers who use the pesticides to be re-trained every five years, and to “verify the identity of persons seeking certification.” It also established a minimum age for applying these chemicals: 18 years old.

Citing the regulatory freeze the Trump administration issued soon after the inauguration, the EPA announced Monday it was putting the new requirements on ice until May 22, 2018. In addition, as Environmental Working Group noted, the agency is accepting comments on the decision only until May 19, “giving the public only a few days to comment on the rule, instead of the customary 30 days.”

The timing of the announcement was particularly awkward, because just days before, at least 12 farmworkers outside of Bakersfield, California, were sickened by a highly toxic pesticide that drifted from a nearby field—and county officials suspect it was chlorpyrifos.

Soon after the election, Trump signaled that his EPA would take a laissez faire attitude toward pesticides, and so far, the administration appears intent on keeping that implied promise.