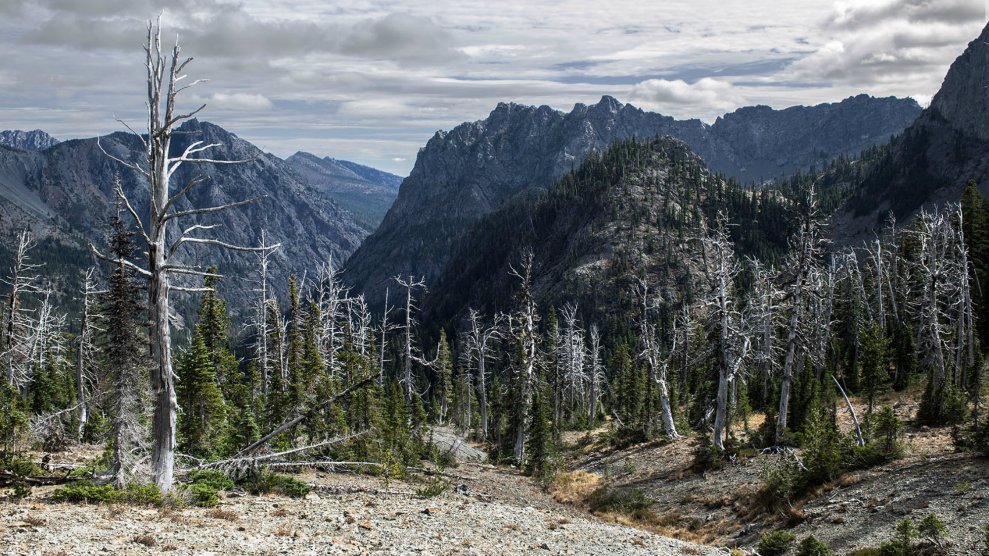 U.S. Forest Service research ecologist Bob Keane has studied whitebark pine, a coniferous tree of the high country, for more than thirty years. Still, when asked to describe a whitebark to someone who’s never seen one, he takes a breath and pauses for a moment. “Gosh,” he says.

The shape of the tree is very distinctive, Keane says. Instead of growing cone-shaped like other conifers, whitebarks branch like hardwoods. “A lot of the undergrowth is very small, so you see these open park-like stands of beautiful spreading trees,” he says. This shape is an adaptation that shows Clark’s nutcrackers flying past that a tree below has many nutritious cones and might be worth a travel stop.

Clark’s nutcrackers cache thousands of whitebark seeds, dispersing the pine across the high country, where the tree is a keystone species. Whitebark pine is one of the first trees to break ground after a fire, thanks to those nutcrackers, and it stabilizes soil and snowpacks at timberline. Living a millennium or more, whitebarks shape the West’s high mountain ecology in countless ways.

But the whitebark is going extinct and the U.S. Fish and Wildlife Service (the agency) hasn’t given the species federal protection under the Endangered Species Act. In April 2017, two conservation organizations from Montana lost a lawsuit against the agency for its failure to list the pine. No one—not the plaintiffs, defendants, or panel of judges from the 9th Circuit Court of Appeals—questioned the precariousness of the tree’s fate. At question was how the agency prioritized which species it protects. Species, the court ruled, could be passed over because the agency didn’t have the necessary funds. As the story of whitebarks demonstrates, extinction has as much to do with politics as it does with biology.

The whitebark pine is an iconic tree of the West’s high mountains, ranging from Wyoming’s southern Wind Rivers to northern Alberta and British Columbia. In the fall, in a whitebark pine forest, “there are tons of cones and it is alive with animals, just alive,” Keane says. “You don’t see that with subalpine firs.” Researchers have found that whitebark cones feed more than 100 animal species and, in Glacier National Park, 40 percent of the understory plants in whitebark pine communities grow only there. The tree’s fatty, protein-rich seeds are an important food for Greater Yellowstone grizzlies; when the seeds run short, the bears eat more meat.

In the fall, in a whitebark pine forest, “there are tons of cones and it is alive with animals, just alive—you don’t see that with subalpine firs.”

The whitebark pine faces intertwined threats that have killed the trees across much of their historic range. In 1910, Gifford Pinchot imported white pine blister rust, a fast-moving European fungal disease that kills whitebarks, to the West in a tree shipment.

And a century of fire suppression has imperiled whitebarks, too. The shade-intolerant trees rely on fire to open areas; without fires, trees such as subalpine firs shade out whitebarks. Often, Keane says, permanently stunted pines linger in the shadows of those new neighbors. “You’ll see an overstory of subalpine fir, but an understory of tiny whitebark pine saplings that are probably older than the canopy,” he says.

Meanwhile, native mountain pine beetles have taken out swaths of whitebark pines weakened by overcrowding and drought; a 2009 beetle outbreak killed whitebarks across more than 3,000 square miles. Exacerbating blister rust’s spread, wildfire suppression, and pine beetle outbreaks is an ever more pervasive threat: “The fourth big one is climate change and how climate change is interacting with all of these things, ” says Amy Nicholas, endangered species listing coordinator for the agency’s Wyoming field office.

Conservationists have requested federal protection for whitebark pines under the ESA for more than 25 years, beginning in 1991. In 2011, the Fish and Wildlife Service found that the pine was likely to go extinct across much of its U.S. range in as little as 100 years, or less than two generations. Yet instead of listing whitebark pine as endangered, the agency listed the tree as a “candidate” species, essentially waitlisting the species for help.

The reason came down to a funding shortage: listing whitebark pine as endangered would have required the agency to devote resources to saving it. Without enough money to care for all disappearing species, the agency focuses on listing species that are part of legal settlements, for example.

Two Montana-based conservation organizations—WildWest Institute and Alliance for the Wild Rockies—sued the agency, arguing that by prioritizing candidate species ranked lower than whitebark pine, the Fish and Wildlife Service wasn’t following its own guidelines for deciding which species to protect. The conservation groups felt species should be given help in order of biological need.

The court ruled in favor of the agency. While pointing out that current policies on listing seemed inadequate when “dealing with the potential life or death of an entire species,” the court concluded that the agency was not required to make decisions based on its candidate species ranking system. “Scarce funds and limited staff resources may prevent FWS from taking immediate final action to list or delist a species,” the presiding judge wrote.

According to Patrick Parenteau, a Vermont Law School professor, the agency often makes listing decisions based on finances. “This is a systematic problem that the Fish and Wildlife Service has had for decades,” Parenteau says. He points to persistent resistance from Congress and some Republican administrations to fully fund the service’s endangered species listing program.

Financial considerations do not factor into whether a species gets listed, but rather in what order and when, agency biologist Craig Hansen says. “The listing budget is given to us by Congress and has an annual cap,” Hansen says. “We can’t pull funds from other programs to list.” The service’s funding woes have led to a backlog of organisms waiting to be listed, such as northern California’s Sierra Nevada red fox, which in 2016 included just 29 remaining adults. 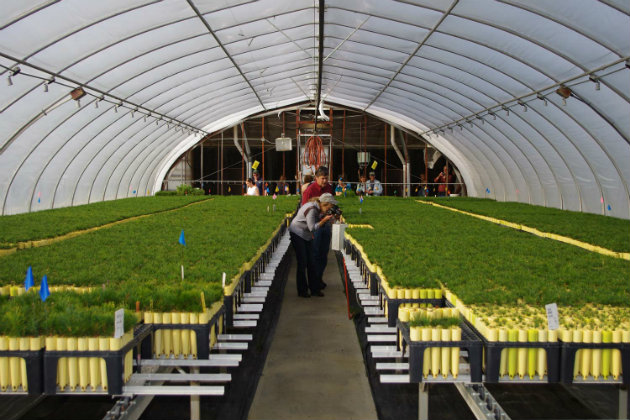 These rust-resistant baby whitebarks are part of the U.S. Forest Service’s collaboration with NGOs trying to save the species. Bob Keane

In 2016, to stop the constant backlog of candidate species waiting to be listed as threatened or endangered, the Obama administration drafted a streamlined process that prioritized the most imperiled species backed by the best available science. It wasn’t adopted by the Trump administration.

Matthew Koehler, executive director of plaintiff WildWest Institute, grows frustrated talking about the whitebark case. Koehler believes the funding shortage that stalled the whitebark’s listing is part of a strategy by Congressional members in both parties to tie the service’s hands. “Then, the same members of Congress complain that the ESA doesn’t work or that it moves too slow,” he says.

Indeed, this past February, Sen. John Barrasso, R-Wyo., led a Senate hearing to “modernize the Endangered Species Act,” arguing in a statement that the ESA has not been successful enough and causes economic harm.

Funding is only one of the ESA’s difficulties, though. Court battles also stymie species’ recoveries. For each species, a listing decision takes years, followed by litigation from whoever opposes the outcome. “It isn’t just a bunch of scientists sitting around a table saying ‘let’s list this species,” says Parenteau. And still, species such as the whitebark disappear.

And then there’s climate change. Congress wrote the ESA in the 1970s, long before scientists understood the profound ways in which greenhouse gases affect species and their homes. The ESA is designed to address discrete problems: overgrazing, point-source pollution, exurban development. In its revision of ESA listing guidelines, the Obama administration acknowledged as much: the agency could have put off working on species endangered by climate change, including whitebark pine, since it has less power to help them.

With our existing environmental laws, whitebarks may yet survive in the northernmost parts of their range in Canada, Parenteau says. “But in the southern part of its range, unless we get serious about climate mitigation, it’s probably doomed anyway,” he says.

In any case, listing isn’t necessary for the feds to take action: Almost all whitebarks occur on federal public land, where the government can take steps to protect the species without listing, Parenteau says.

Indeed, having given up on the ESA for now, the WildWest Institute is seeking other pathways to whitebark protection. The organization is supporting a bill introduced to Congress to designate public lands in the northern Rockies where whitebarks live as wilderness. “We see wilderness designation as a way to protect that entire ecosystem,” Koehler says.

When pressed to make predictions for the longterm, Keane says areas where whitebarks used to flourish will probably eventually burn. By then, though, there will be no source trees left for birds to find seeds to spread to freshly burned areas. Instead, he imagines, shrub herblands will grow.

Still, unlike Parenteau, Keane is optimistic about the climate extremes that whitebarks can survive, if the trees get help. He’s part of a new collaboration between the U.S. Forest Service and two NGOs – American Forests and the Whitebark Pine Ecosystem Foundation—that’s working to restore whitebarks in the West. The group’s even developing rust-resistant seedlings. “Whitebark pine doesn’t even start optimum cone production until it’s 200 years old,” he says. “What we want to make sure is what we’re doing now, 100 years from now we will see the fruits of our labors.”

“If we do nothing,” Keane says, “we are making sure that it will be so low on the landscape, we will probably name the ones we see, there will be so few of them.”