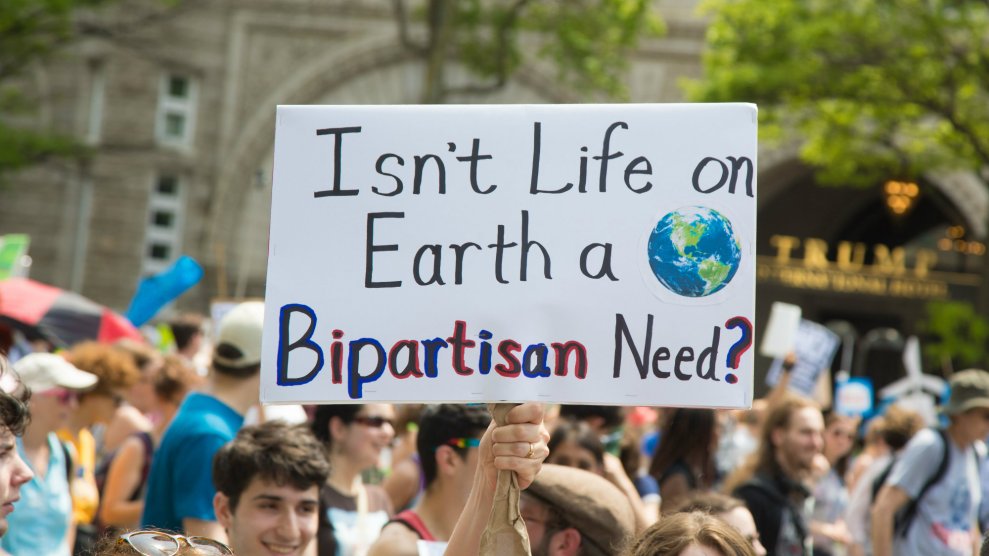 This story was originally published by New Republic and is reproduced here as part of the Climate Desk Collaboration.

In 2009, Republican Congressman Bob Inglis went snorkeling in the Great Barrier Reef and returned home a changed man. He saw the massive bleaching of the once-colorful Australian corals, and realized that climate change was real. US lawmakers, he concluded, needed to take conservative, market-based action—like eliminating fuel subsidies and implementing a revenue-neutral carbon tax—to fight the problem. But Inglis didn’t get much time to push those policies, because the following year South Carolina voters kicked him out of office. Trey Gowdy, the man who replaced Inglis in Congress, had told voters, “Global warming has not been proven to the satisfaction of the constituents I seek to serve.”

Seven years later, a handful of congressional Republicans have dared to cross to Satan’s side as members of the House of Representatives’ Climate Solutions Caucus, which in its second year has 20 Republicans and 20 Democrats. In joining, all have publicly declared that they’re concerned about human-caused global warming and want to be part of the solution. “This is the first time we’ve seen anything like this in Congress,” said Ted Deutch, a Florida Democrat who co-founded the caucus in 2016 with his Republican colleague Carlos Curbelo. “I think it’s a pretty big deal.”

“This is the first time we’ve seen anything like this in Congress. I think it’s a pretty big deal.”

Bipartisanship on the climate front is sorely needed. According to a ThinkProgress analysis, there are 180 climate-science deniers in Congress—more than 59 percent of the House GOP caucus, and 73 percent of Senate Republicans. With the GOP in control of Congress, federal action on climate change is impossible without a significant minority of Republicans.

But as the past week revealed, there are limits to how far even climate-friendly Republicans will go on the issue. Nearly all of the 20 GOP members of the caucus refused to take President Donald Trump to task for withdrawing the U.S. from the Paris climate agreement. Tom Reed and Claudia Tenney, both from New York, said they supported Trump’s decision. Three members—Mike Gallagher, Dave Reichert, and Mark Amodei—issued no response at all. And though the rest generally opposed Trump’s decision, nearly all had some kind of caveat. Peter King, for instance, said the agreement would have “cost American jobs.” Elise Stefanik said President Barack Obama “should not have entered into the agreement without consulting Congress.”

If you’re a politician who accepts the reality of climate change, and you’ve joined a group that seeks political solutions to the problem, this moment should have been a slam dunk. The Paris climate agreement is non-binding—a symbolic but meaningful pledge to work with other countries to solve a global crisis. The agreement doesn’t say how the U.S. must do this, just that it should. If the climate-minded Republicans in the Climate Solutions Caucus can’t even agree on Paris, how can they agree on actual legislation? And if they can’t agree, why does the caucus exist at all?

When the Climate Solutions Caucus was formed early last year, it was met with great praise—if only because any show of bipartisanship was novel for the House of Representatives, let alone on the issue of climate change. “This is a promising baby step toward sanity in a body that has been so utterly paralyzed on this issue for far too long,” climate writer Andy Revkin wrote in the Times.

Indeed, it took years to create the caucus in the first place. Jay Butera, a volunteer for the advocacy group Citizens Climate Lobby, approached Deutch in 2013 about getting Republicans in the same room as Democrats to discuss climate solutions. Deutch liked the idea, but when Butera started visiting Republicans’ offices on Capitol Hill, he was met with laughs. “Good luck with that,” he recalled people saying.

It wasn’t until Deutch partnered with Congressman Carlos Curbelo that the ball really got rolling. Curbelo was a uniquely situated Republican—a young 37-year-old whose district includes Miami, which is slowly sinking into the ocean. His constituents need climate action more than most, and his aggressive rhetoric reflects that. When Scott Pruitt, the head of the Environmental Protection Agency, cast doubt on climate science earlier this year, Curbelo called it “reckless and unacceptable.” And after Trump pulled America out of the Paris agreement, Curbelo went on CNN and forcefully condemned the administration. (Although he did say current polarization on climate issues was because of Al Gore.)

But not every Republican on the climate caucus is so uniquely situated. Don Bacon is from Nebraska, and Mia Love is from Utah. Both states are being negatively impacted by global warming—droughts destroying crops in Nebraska, rising temperatures melting ski slopes in Utah—but they’re not on the front lines like Miami is. Most of GOP members of the caucus are from moderate Republican districts—which surely emboldened them to join the group in the first place—but if their constituents are like most voters, they don’t consider climate change a top priority.

As the Times observed this week, “in Republican political circles, speaking out on the issue, let alone pushing climate policy, is politically dangerous.” That’s not just because only 18 percent of Republican voters care “a great deal” about the impacts of climate change, but because moneyed interests have been fighting tooth-and-nail against climate-friendly Republicans since 2010, when the Supreme Court’s Citizens United decision freed corporations from campaign finance restrictions. When that happened, “Koch Industries and Americans for Prosperity started an all-fronts campaign with television advertising, social media and cross-country events aimed at electing lawmakers who would ensure that the fossil fuel industry would not have to worry about new pollution regulations.” Republicans who used to support renewable energy suddenly went quiet.

Such fear and hesitancy is likely seeping into the Climate Solutions Caucus, said Steve Valk, the communications director for Citizens Climate Lobby. “A lot of them are concerned about looking at the polls and going, ‘Gee, is this is something that can cost me my seat?” No one wants to end up like Bob Inglis.

The political consequences of appearing too climate-friendly may be hindering the Climate Solutions Caucus in ways well beyond the Paris agreement. In late May, the caucus held its first public meeting—and barely any of its members attended. Out of the 40, nine attended, though there were never more than seven in the room at once. Only three Republicans showed up: Curbelo, Costello, and Love. Most members didn’t stay the entire hour. At one point, there were only two members in the room.

Afterward, Democratic member Suzanne Bonamici told me this was “typical” of caucus meetings. Usually, people just don’t show. At the end of the meeting, I asked Curbelo if he was disappointed in the attendance, and he responded similarly. “Look, there’s so much going on today,” he said, noting that he had to leave the meeting to ask Treasury Secretary Steve Mnuchin a question before the Ways and Means Committee. Curbelo stressed that the meeting occurred at all. “We’re growing every day,” he said. “We’re getting deeper into the issues. That’s what’s important right now.”

Deutch argued that anything counts as progress in this highly partisan environment. “We don’t expect every member to share the same views on every issue,” Deutch said when asked why members were not on the same page about Paris. “But all of them have stepped up and committed to being part of an important conversation that has been unfortunately gridlocked for too long.”

It is still gridlocked. The caucus is supposed to come up with actual solutions, and none have materialized. Deutch, Curbelo, and advocates for Citizens Climate Lobby admit that things aren’t moving along as quickly as they’d like, but they note that two caucus members introduced a bill last month that would establish a bipartisan commission to create climate policy recommendations for the president and Congress. Valk says Americans should wait for that to pass before judging the effectiveness of the caucus. “Give them a chance to come up with some solutions, and see what happens,” he said. “That’s where you can really measure them and take stock of what they’re able to do.”

But let that sink in: A bipartisan group, which was formed to push climate policies in Congress, is pushing the creation of another bipartisan group to push climate policies in Congress. Such is progress on Capitol Hill. Meanwhile, anyone who wants to see a solution to the climate crisis knows that time is running out. That includes Deutch. “I don’t think anyone pretends that the way to address climate change is through conversation and baby steps. Ultimately it requires a broader, bigger conversation about bold steps that Congress ought to be taking over the long term,” he said. “That’s our goal. We’re just not there yet.”