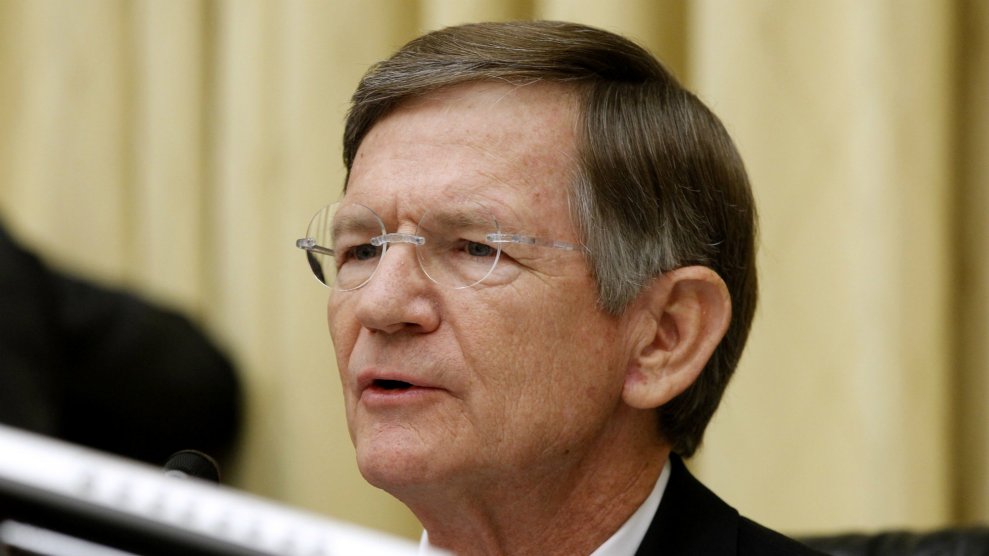 Rep. Lamar Smith (R-Texas) — who has spent his career cozying up to fossil fuel interests, dismissing the threat of climate change and harassing federal climate scientists — is now arguing that pumping the atmosphere full of carbon dioxide is “beneficial” to global trade, crop production and the lushness of the planet.

Rather than buying into “hysteria,” Americans should be celebrating the plus sides of a changing climate, Smith argues in an op-ed published Tuesday in The Daily Signal, a news website published by the conservative Heritage Foundation.

Smith — who has used his power as chairman of the House Committee on Science, Space and Technology to push his anti-science views — kicks off his op-ed by claiming Americans’ perception of the phenomenon is “too often determined by their hearing just one side of the story.”

“The benefits of a changing climate are often ignored and under-researched,” Smith said. “Our climate is too complex and the consequences of misguided policies too harsh to discount the positive effects of carbon enrichment.”

Smith goes as far as to make a case for why a rapidly melting Arctic, which scientists warn could cost tens of trillions of dollars by the end of this century, is a positive thing.

“Also, as the Earth warms, we are seeing beneficial changes to the earth’s geography,” he writes. “For instance, Arctic sea ice is decreasing. This development will create new commercial shipping lanes that provide faster, more convenient, and less costly routes between ports in Asia, Europe, and eastern North America. This will increase international trade and strengthen the world economy.”

The op-ed comes roughly two months after Smith led a group of lawmakers on what BuzzFeed described as a “secret tour of the melting Arctic.” The unpublicized, weeklong, multi-stop outing included meeting with climate scientists and learning about how they track the levels of carbon dioxide and other greenhouse gases, according to BuzzFeed.

While Smith reportedly canceled an interview with BuzzFeed to discuss the trip, Rep. Jerry McNerney (D-Calif.) told the publication that he and Smith had productive discussions about the climate.

Monday’s op-ed would suggest that, while Smith may have accepted the reality of the threat, he’s opted for the when-life-gives-you-lemons-make-lemonade approach.

Michael Mann, a climate scientist at Pennsylvania State University who sparred with Smith during a March hearing on climate science, told HuffPost via email that “it is clear” Smith is “slowly advancing through the stages of denial … having apparently now moved from ‘it’s not happening,’ to ’ok—it’s happening, but IT WILL BE GOOD FOR US!”

“One step at a time I suppose,” Mann wrote, “but at least there is some apparent progress toward the truth (that climate change is real, human-caused, and already a problem).”

Joseph Kopser, an aerospace engineer and Army veteran from Austin, Texas, is one of several Democratic candidates vying for a chance to unseat the 16-term Republican in the 2018 midterm election. Reach Monday by phone, Kopser described Smith’s op-ed as “stunning.” And he said it is “exactly” what the late English author George Orwell warned about in his dystopian novel Nineteen Eighty-Four.

“He is acknowledging the warming planet,” Kopser said. “And he’s trying to use Orwellian speak to say that, ’No, no, no — These terrible things that scientists have talked about and proven and explained why they are terrible for our planet, are actually good things.”

What Smith is doing, Kopser said, is “equivalent to telling somebody who’s in a flood, ‘Oh no no, all this water is going to be great. Just think how much more drinking water you’re going to have available.’ Or somebody in a burning house, “No no, think, you now no longer need a furnace because you have this wonderful heat source all around your house.’”

First elected in 1986, Smith is the 14th longest-serving member of the current U.S. House. The San Antonio native has received more than $700,000 from the oil and gas industry over those years. In his five years as chairman of the science committee, he has worked to defund climate research and harassed federal climate scientists, whom he has accused of playing “fast and loose” with data. He has also sprinted to defend the fossil fuel industry ― namely Exxon Mobil Corp. ― from investigations into their own records on climate change and used his power to stack hearings with coal and chemical lobbyists and climate skeptics.

Burning fossil fuels, Smith writes in his op-ed, has “helped raise the standard of living for billions of people.”

“The use of fossil fuels and the byproducts of carbon enrichment play a large role in advancing the quality of human life by increasing food production to feed our growing population, stimulating the economy, and alleviating poverty.

Bad deals like the Paris Agreement would cost the U.S. billions of dollars, a loss of hundreds of thousands of jobs, and have no discernible impact on global temperatures. Instead of succumbing to fear tactics and exaggerated predictions, we should instead invest in research and technology that can help us better understand the effects of climate change.”

Smith is among a trio of Republicans that nonprofit political action committee 314 Action is targeting for their anti-science views. Smith’s office did not immediately respond to HuffPost’s request for comment Monday.

In a statement Monday, 314 Action founder Shaughnessy Naughton blasted Smith’s op-ed as the latest of his “industry-funded attacks on scientific consensus around the issue” of climate change.

“Rather than playing the hits to the Heritage Foundation’s mouthpiece, I challenge Mr. Smith to explain the benefits of climate change to the displaced people of Isle de Jean Charles or Tangier Island,” said Naughton, referring to two U.S. islands vanishing as ocean levels rise. “If climate scientists can’t convince him, maybe our country’s first climate refugees can.”