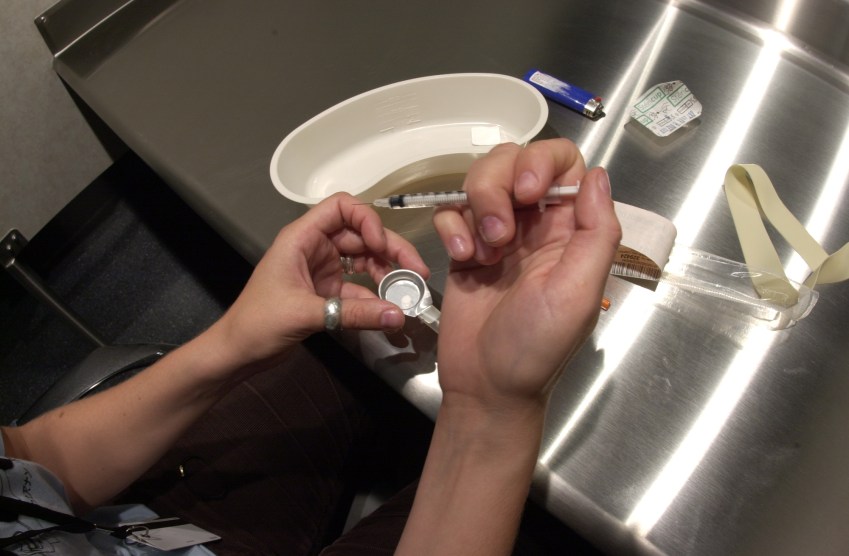 A photo from North America's first safe injection site that opened in Canada in 2003.Insite

There are an estimated 22,500 people living in San Francisco using injectable drugs like heroin, fentanyl, and methamphetamines—and nearly 70 percent of those people are homeless, according to 2015 estimates from the city’s task force. The combination has led to a spike in public drug use and discarded syringes, which can in turn spread HIV and hepatitis C. But rather than criminalizing this drug use, the city is looking into the idea of doing just the opposite: creating safer spaces for people to shoot up.  In April this year, the local government directed the Department of Public Health to convene a Safe Injection Services Task Force to compile recommendations should the city decide to go forward with these sites.

Safe injection services, commonly known as safe injection facilities (SIFs), are places where anyone can inject illicit drugs under medical supervision. There are approximately 100 SIFs across the globe, mainly in Europe, Australia and Canada. In 2003, Vancouver became the first city in North America to open one, called Insite.

The United States has never had one, but the staggering rise of injectable drugs may change that. The country had nearly 500,000 overdose deaths from 2000 to 2014, and 47,055 of those occurred in 2014—which is more than any prior year on record. “We’ve hit a critical mass of awareness of the opioid epidemic,” Laura Thomas, the California deputy state director for the national nonprofit Drug Policy Alliance, says. In terms of solutions, she says, “Now there is a willingness to try other things.”

“We’ve hit a critical mass of awareness of the opioid epidemic,” says the California deputy director of the Drug Policy Alliance. “Now there is a willingness to try other things.”

King County, Washington, home to Seattle as well as a threefold increase in heroin overdose deaths from 2009 to 2014,  approved the creation of two SIFs in January. On June 20, the New York Assembly introduced a bill to legalize the sites, and politicians in the state of California introduced a similar bill in January. (It’s still moving through Legislature.) San Francisco’s task force is scheduled to release a final report of its recommendations in September, though it hasn’t approved any SIFs.

Not everyone agrees this is the best way to help drug users. Before you decide, here’s what you should know about SIFs:

How do safe injection facilities work?

Safe injection facilities are usually located in neighborhoods with high rates of drug use and crime. The facilities don’t sell or provide any illegal drugs, but people can bring their own intravenous drugs to these centers—which provide sterilized equipment like needles and alcohol prep pads—to inject under the supervision of medical professionals.

“When you walk into the main injection room, it’s a very nice, friendly, welcoming atmosphere…All the equipment you need is laid out on a stainless steel counter,” says Thomas, who has visited several sites in Vancouver. Reception staffers track who comes in and what drugs they’re using, and try to connect patients with resources to help with anything from housing assistance to addiction treatment. Trained nurses and sometimes doctors, depending on the facility, are on staff to provide advice on safely shooting up and respond to overdoses and other medical emergencies.

The New York Times visited Insite back in 2011 and profiled an drug user who frequented the facility. Fast-forward to 2:00 for a look inside:

What’s the difference between a SIF and a needle exchange?

While SIFs offer needle-exchange services—where an addict can obtain sterilized hypodermic needles and paraphernalia—they take it one step further by permitting patients to shoot up inside. The motivations are the same: These programs work to curb public drug use and the transmission of diseases like HIV and hepatitis C and skin infections that are spread through used needles. Both adhere to the principles of harm reduction, which is a widely used approach that works to minimize the negative consequences of drugs.

How do SIFs help?

Advocates argue that the facilities reduce overdose deaths, increase access to treatment, and prevent the transmission of diseases. The American Medical Association voted to endorse SIFs this month and released a statement supporting the development of pilot facilities in the United States.

The research suggests that SIFs could at least reduce some of the most harmful public effects of drug abuse. A 2014 scientific review out of Europe analyzed 75 studies assessing the efficacy of SIFs, and concluded that they are successful in reducing overdoses and public drug use and increasing access to health care for the most marginalized drug users. Additionally, the study showed that these facilities did not cause a rise in drug trafficking or crime in the surrounding areas. A separate group of researchers compared the overdose mortality rates within about a 0.3-mile radius of Insite in Vancouver between the two years before it opened and the two years after it opened. They found the fatal overdose rate decreased by 35 percent, and the rate in the rest of the city also dropped 9 percent.

And there is evidence that SIFs could save cities some money. Researchers in the United States and Canada analyzed the potential savings associated with fewer HIV and hepatitis C patients, fewer overdoses, and fewer skin infections, and concluded that Baltimore would save $6 million and San Francisco would save $3.5 million every year.

What are the arguments against these facilities?

One of the main concerns is that they create a sanctioned space to shoot illicit drugs. San Francisco Mayor Ed Lee voiced his opposition to the idea at a panel on homelessness hosted by Seattle University earlier this year. “We have a vigorous disagreement over allowing people to inject heroin and meth, to literally destroy their bodies and their minds, in a city-funded shelter, as some have proposed,” Lee said. However, he has since said that if medical professionals support the idea—in addition to the American Medical Association endorsement, others like the Harm Reduction Coalition and AIDS United have also advocated the services—then it’s worth exploring.

Others have feared that SIFs will promote drug use and possibly attract new users. After King County, Washington, announced it would open two SIFs, Washington Sen. Mark Miloscia is now sponsoring a bill to ban them, which has been stalled in the legislative process since March. “We must invest in compassionate treatment options,” he states on his website. “Do we really want to become the heroin capital of America?”

What does the Trump administration have to say about SIFs?

Not much. “That’s the wild card,” Thomas explains. “This is an administration that’s extremely hard to predict.” SIFs are currently illegal under US law, but, they seem to be going the way of medical marijuana—with states moving toward legalizing them despite the federal government’s policies. “As an advocate and as someone who has lost people I loved to overdoses, we don’t have time to figure out what [the US government’s] approach is going to be,” Thomas says. “We need to move forward with trying new interventions.”