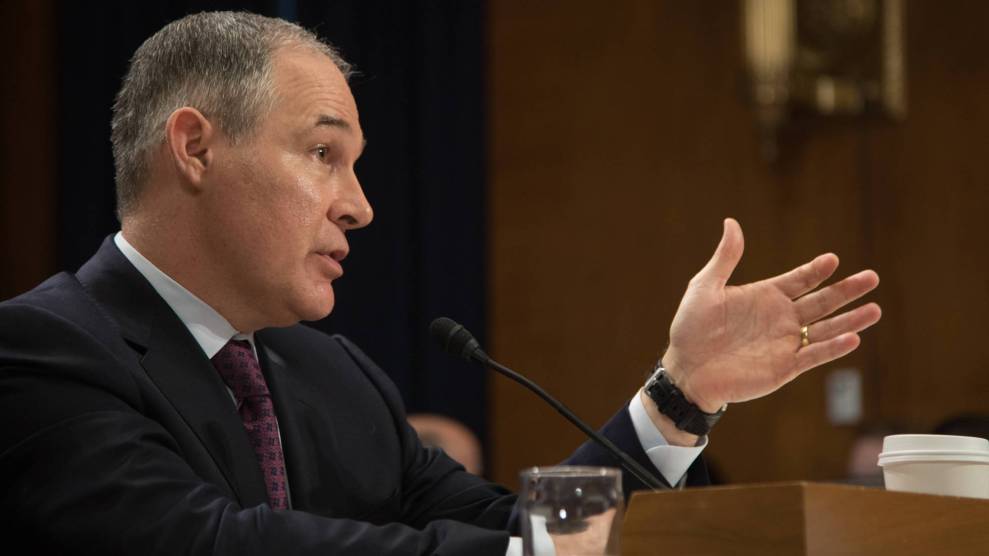 These days, Environmental Protection Agency staffers who aren’t in Administrator Scott Pruitt’s inner circle will only speak to the press anonymously for fear of retribution or losing their jobs. Not John O’Grady, who has worked as an environmental scientist in the agency’s Chicago regional office since the first Bush administration. As president of the EPA’s employee union, American Federation of Government Employees Council 238, it is O’Grady’s job to be out in front, often criticizing the administration, in order to defend the jobs of its 9,000 members across the country who can’t afford to speak up so publicly.

“Are we here to protect human health and the environment or are we here to make sure companies make a profit?”

O’Grady, a biochemist by training, once thought the EPA was “too bureaucratic” for his taste. But after taking the plunge, he’s had his hands in everything from the EPA’s Superfund cleanup to its pesticides and water quality programs over his three-decade career at the agency. O’Grady has been especially busy since Trump has taken office, as union chapters have led organizing campaigns like a recent “National Save the US EPA Day,” and even taken the unusual step to protest Pruitt’s appointment earlier this year.

His union duties were what brought us to AFGE’s Washington headquarters earlier in September. He spoke to me—on behalf of the union, not the EPA—hours before he planned to meet Republican congressional leaders to make a case for shielding the EPA from budget cuts; we followed up later on the phone. O’Grady told me he’s concerned that the EPA’s mission is drifting under Pruitt—”Are we here to protect human health and the environment, or are we here to make sure companies make a profit?”—and, on the eve of three major hurricanes, he talked about what all of this means for the much-needed emergency response.

Mother Jones: The EPA is pursuing buyouts for staff, some employees have quit in protest, and many of the top positions at the regional and national level remain unfilled, not to mention that the EPA’s staffing is approaching its lowest level since the Reagan administration. How do all these EPA vacancies affect responding to real-time disasters?

The double edge is when you send these people to respond to these hurricanes, that money is taken in part from Clean Air Act programs, clean-water action, and hazardous-waste programs. The emergency response is generally handled by on-scene coordinators, and we’ve been losing some of them lately. They are a specially trained crew that is trained for hazardous waste and emergency response. We have a regional response core, which consists of regional employees, that volunteers to be mobilized in hurricanes. If you have fewer people, you have fewer in the response core.

Look back at 2001 or 2005 when we had anthrax [threats] or Katrina, we had higher staffing levels and we had more money as well. We had the [1986] Challenger disaster, the [2003] Columbia disaster. We deployed teams for on-scene coordinators to go down there to assist with the cleanups. But with the buyouts and retirements, a lot of the experienced on-scene coordinators are leaving. I don’t see the capacity to respond to a lot of these events.

JO: Pre-Trump. But it was just a fact that our numbers have been going down since 1999, and it looks like it is going to go down a lot more.

MJ: There have been a bunch of accusations about EPA HQ’s interaction with career staffers—like not allowing notes in meetings, not listening to experts on staff, and censorship of climate change in grants.

Pruitt is “kind of like a very good attorney not leaving a paper trail.”

JO: Here’s the big problem with this administration. We have Administrator Scott Pruitt, who does not send emails out. So when he has a meeting, he has a verbal meeting with people and then the verbal orders are dispersed. It’s really kind of like a very good attorney not leaving a paper trail. There are a few mass mailers from Mr. Pruitt, but those are generally written by someone else and sent out under his name.

MJ: If Pruitt is not sending emails, who is?

MJ: And is that unusual?

JO: I think so. For example, in the former Office of Solid Waste Emergency Response, there were [guidelines] you could read; that’s our policy, [but] those kinds of things seem to be diminishing. It’s not a sudden thing, like we had it, then we don’t. It’s just kind of drifting.

MJ: How does that affect the work?

JO: I think it makes people less certain of what they’re supposed to do. Administrator Pruitt, when he was first at EPA, talked about how the agency is supposed to provide a standard approach, certainty, rule of law. Well, I think we have less of that today because it’s like we’re guessing. Are we here to protect human health and the environment, or are we here to make sure companies make a profit?

I think it’s beginning to drift toward our mission being compromised. Every other administrator, whether it was Republican or Democrat, would come in and establish their principals and communicate as necessary. There wasn’t a question. But this administration is really kind of strange.

“This administration is really kind of strange.”

MJ: Does having acting heads in several regional offices limit what those offices can do?

JO: On a personal level, I’m glad they’re not yet staffed with political appointees because I think then things are going to get worse. Then they’ll start directly implementing their programs more aggressively. Right now you have people who have been in the agency for years who are acting in the capacity of regional administrator, deputy regional administrator, and its better that way right now than if we had a Trump appointee or a Pruitt appointee.

MJ: What are you telling your members regarding the Hatch Act, the law that prevents federal employees from engaging in political campaigns and lobbying?

JO: Be very cautious. I put out a letter in February because I was hearing rumors about people going on strike and said, “Wait a minute, we have no right to go on strike as members of the federal civilian service. So don’t even talk about it and don’t participate in it.”

We don’t have an election coming up just yet, but when we get close to next summer and people are directly running for Congress and the Senate then, be very careful, folks: Hatch Act kicks in again. Careful especially on the property, on government time, and never with government equipment.

MJ: What are the most unsettling directives or initiatives you’ve seen come out of headquarters?

He talks about the Superfund program like he’s going to get in there and magically speed everything up. It does take a long time, but there’s a reason for that. Up until 1995, when we had the Superfund tax, we had a fund we could go into and we could clean up a site. It’s listed on the “National Priority List.” We could go right away and ask for the Superfund money and do the remedial investigation, the feasibility study, record the decision, clean the thing up, and then go after the responsible parties. But since that tax and money have dried up, now we find out who the parties are, go to court and sue them, and sit down with them and get them to clean up the site using their money. And that’s a constant battle. That takes time.

So how are you going to jump in there and suddenly speed everything up with no extra money? It’s not going to happen.

MJ: Where are we in the Trump administration’s pursuit of buyouts at the EPA?

“How are you going to jump in there and suddenly speed everything up with no extra money? It’s not going to happen.”

MJ: Looking out ahead, where do you think the EPA will be in a few years?

JO: It’s scary to even think of that.

One of the big problems is this: How often have you heard of a major corporation, whether it’s Coca-Cola, Pepsi, Walmart, talk poorly about their employees? Yet in America, we have the House and the Senate speaking ill of federal employees.

All of this is impacting people and their morale. I’m certain that at some point people graduating from college, the kind of people you need to bring onto the agency each and every year, they’re going to look at that and say, “Why would I work for the agency or the government?” They’re not going to do that. That’s my big concern.

MJ: How has your union’s role changed to adapt to this administration?

JO: In the past I would say it was pretty typical for unions to almost exclusively work on grievances, arbitration, and unfair labor practices. But given the fact that the ultimate working condition is whether or not you have a job, we’ve begun doing more [to alert] Congress to the dangerously low levels of staff and how the budget is going to basically cripple the agency.

MJ: Back to why you were in town, how do you talk to Republicans to get them on board with the EPA’s work?

JO: I hope the Republican leadership can see us as individuals, as human beings, as dedicated civil servants who care about accomplishing the mission of the agency and are basically carrying out the wishes of Congress.

The interview has been edited for length and clarity.