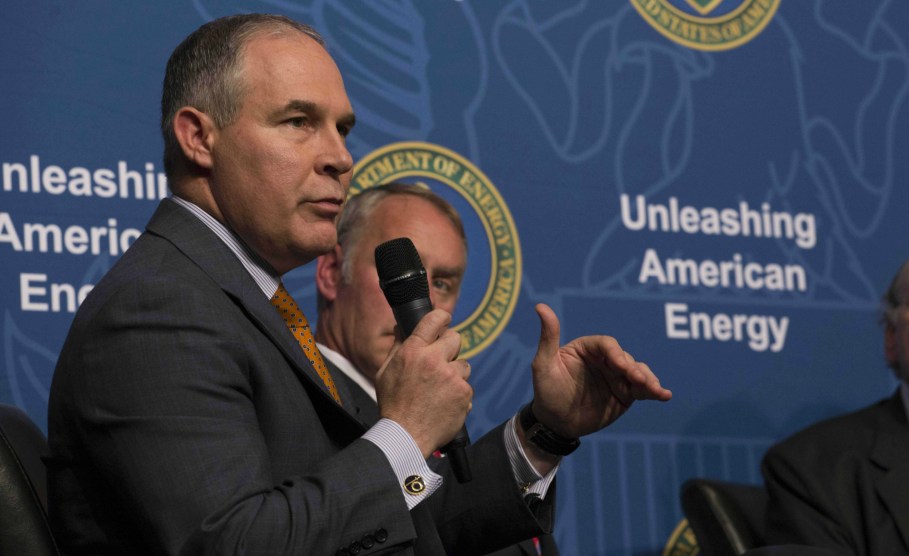 Over the weekend, the Environmental Protection Agency took a cue from President Donald Trump’s media-bashing playbook and issued a press release titled “The EPA’s Response to the AP’s Misleading Story.” It accused the Associated Press of an “incredibly misleading story” about flooded Superfund sites in the greater Houston area.

The AP reported that the EPA was not on the scene to survey the area’s Superfund sites that were underwater because of Harvey. The EPA put out a statement Saturday condemning unnamed “inaccurate reporting” about Superfund sites, while confirming that 11 sites were inaccessible because of the flooding. The next day the EPA followed up with an even more accusatory press release. Without challenging any of the facts in the AP report, the release attacked one of the bylined reporters, Michael Biesecker, personally:

“Despite reporting from the comfort of Washington, Biesecker had the audacity to imply that agencies aren’t being responsive to the devastating effects of Hurricane Harvey. Not only is this inaccurate, but it creates panic and politicizes the hard work of first responders who are actually in the affected area.”

Attempting to further discredit Biesecker’s previous reporting, the EPA release went on to cite Breitbart and the Oklahoman‘s editorial board. Breitbart, where Trump’s ex-adviser Steve Bannon has returned to the helm, followed up on the AP-bashing press release, calling the report “fake news.” What the unsigned EPA release didn’t mention was that AP had reporters on the ground assessing the damage, and that the agency had actually confirmed to the AP that its teams hadn’t yet assessed the 11 flooded Superfund sites in person.

Many observers noted the EPA’s media strategy has taken a Trump-like turn.

But EPA Administrator Pruitt has been pursuing similar tactics for months, turning the EPA’s public outreach into a spin-machine that amplifies a conservative echo chamber of positive coverage. Back in July, I looked at the gulf between the EPA’s media narrative and certain realities:

The EPA’s public affairs staff now focus on promoting mostly right-wing outlets, some with ties to the Trump administration, on the EPA’s social-media feeds and in news releases. The result? An echo chamber cheerleading the EPA’s regulatory rollbacks, Trump’s withdrawal from the Paris climate agreement, and its newfound anti-science denial.

Since taking office, Pruitt has repeatedly given interviews to friendly interviewers or sympathetic conservative pundits while ignoring interview requests from mainstream outlets. One of his favorite venues is with radio show host Hugh Hewitt (who has a son working for Pruitt). In an appearance on another conservative Alabama radio program, Pruitt even seemed to agree with the host’s suggestion that his ultimate goal was to eliminate the EPA. The EPA administrator has rarely taken questions from the public except at conservative and industry-friendly events. Media Matters confirmed the EPA’s skewed press strategy, finding that Fox News outranked all other networks as Pruitt’s favorite TV venue, appearing 12 times as opposed to a total of six appearances on the other five major networks.

We’re now seeing the same strategy play out, but the stakes are much higher, as the EPA responds to an environmental crisis in real time. So far, its public response has involved dialing up the spin for its conservative audience instead of briefing the public on Harvey’s environmental damage.

Breitbart has remained a go-to shop for Pruitt’s team at the EPA. Last Monday, when Houston was already under 30 inches of water, Breitbart‘s radio host Alex Marlow interviewed Pruitt about the storm, asking him to respond to “media fallout” about climate change. “I think at this point to look at things like this and to talk about a cause and effect really isn’t helping the people of Texas right now,” Pruitt said, adding it’s “opportunistic [of] media to use events like this to, without basis or support,” engage in a “cause and effect type of discussion, and not focus upon the needs of people.”

The recent attack on the AP reporter is another example of the symbiotic relationship. For example, the EPA press release complained that “Biesecker has a history of not letting the facts get in the way of his story.” Breitbart’s version made the same charge when alleging the reporter had “invented an imaginary meeting” between Pruitt and the Dow CEO. In fact, there was no invention at all; evidence of that meeting came from Pruitt’s FOIA’ed calendar, though the actual encounter was only a handshake instead of a closed-door meeting.

Naturally, in the wake of Hurricane Harvey, the EPA has enough to deal with: A flooded chemical plant, bad air quality, sewage in the floodwaters. In the past, the EPA’s longtime regional career staff came together with high-level political appointees and related offices to respond to a crisis and offer advice to residents in harm’s way. Pruitt instead has alienated and criticized the EPA’s career staff.

Liz Purchia, a former Obama EPA spokesperson, said in an email that in the middle of catastrophe, the statement was “one [of] the dumber things that the politicals in the EPA press office could have done.”

More so, she says, because the disinformation campaign distracts from the more important problems on hand. “It created a sideshow while they should be focused on communicating to the public about the agency’s response efforts to help the people impacted by Harvey,” she said. “It is a waste of government resources to spend time being petty in the midst of a public health emergency when crisis communications is critical.”