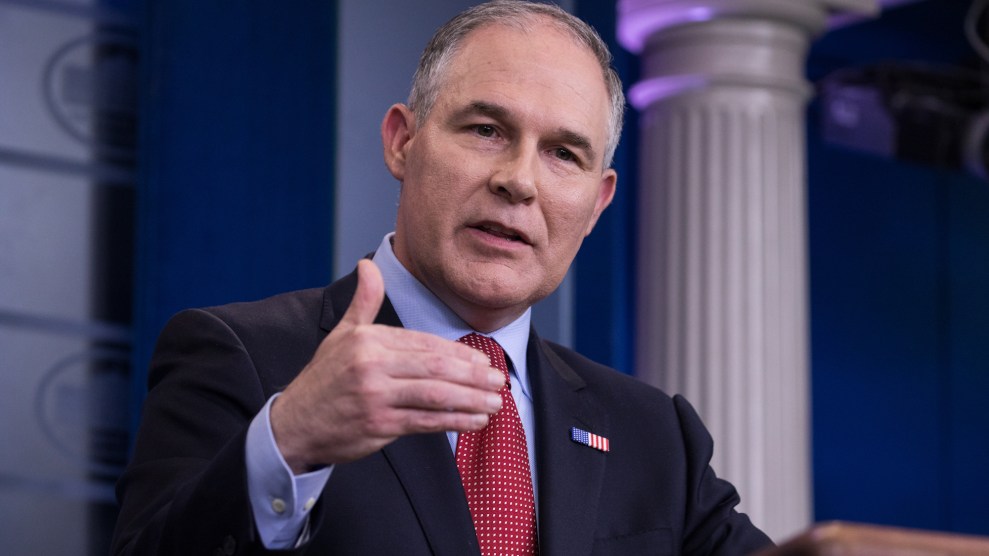 Environmental Protection Agency Administrator Scott Pruitt on Tuesday used the Bible to explain his major changes to the composition of the agency’s independent science advisory committees, which play an important role in guiding and advising the EPA’s regulatory work.

“In the book of Joshua there is a story about Joshua leading the people of Israel into the promised land after Moses passed away,” Pruitt said. “And Joshua says to the people of Israel choose this day whom you’re going to serve. And I would say to you this is sort of like the ‘Joshua Principle’ that as it relates to grants to this agency, you are going to have to choose either service on the committee to provide counsel to us in an independent fashion or you can choose grants, but you cannot do both.”

What the “Joshua Principle” means for the EPA is that scientists who receive agency grants for their research are now barred from serving on any of its independent advisory boards. This opens the door to more industry and political representation on the Clean Air Scientific Advisory Committee, the Board of Scientific Counselors (BOSC), and the Science Advisory Board (SAB). The EPA’s most ardent critics in past administrations cheered the directive, which was announced at a “Live Press Event”—though it was unclear that many reporters were invited to attend.

Among the most vocal critics of the science advisory boards has been House Science Chairman Lamar Smith (R-Texas), who sponsored a bill that would have required no SAB panel members to receive “current grants or contracts from the Environmental Protection Agency and shall not apply for a grant or contract for 3 years following the end of that member’s service on the Board.” The directive announced today reflects Smith’s priorities and also outlines efforts to insure what Pruitt calls “fresh perspectives” and “geographic diversity.”

These boards are independent, but appointed by the administrator, and serve as a type of peer review on the agency’s work, reviewing the rigor and integrity of how the agency uses science to support its rulemaking. One high-profile example from the Obama administration was the SAB’s critique of the EPA’s 2015 finding that fracking had not led to”to widespread, systemic impacts on drinking water resources in the United States.” The SAB responded by noting inconsistencies between that conclusion and “the observations/data presented in the body of the report.” There are widespread implications of appointing industry-sympathetic members, especially as Pruitt’s EPA plans to take a new look at many of the EPA’s scientific conclusions regarding climate change, air pollution, and water pollution.

Well-known climate change deniers Smith and Senator James Inhofe (R-Okla.) joined a parade of white men who gave speeches at the EPA headquarters heralding the new era of its scientific review. Pruitt’s new appointments to chair the EPA’s high-profile panels also spoke. The new chair of the Science Advisory Board is Michael Honeycutt, a toxicologist who had once received industry support for a past failed bid to head SAB. Paul Gilman, a former EPA adviser who left the agency in 2004 for a waste-to-energy company Covanta Energy, will be in charge of the 18-member Board of Scientific Counselors. And the Clean Air Safety board will now be headed by Tony Cox, a private consultant who’s authored research saying the benefits of pollution reduction are overstated.

Steve Milloy, a lawyer connected to tobacco and oil companies and contends that the EPA overstates the health risks of air pollution, cheered the announcement:

The CEO of the American Association for the Advancement of Science (AAAS) Rush Holt denounced the decision in a statement. “Leading scientific experts who are conducting environmental science research should not be prohibited from participating on EPA science adviser boards and committees if they have met the appropriate financial conflict of interest policy,” he said. “Science and the use of science in evidence-based policymaking cannot thrive when policymakers use politics as a pretext to attack scientific objectivity. Given its desire to limit expert perspectives and the role of scientific information, we question whether the EPA can continue to pursue its core mission to protect human health and the environment.”

The full list of scientists the EPA will name to these committees won’t be made public until next week, but the Washington Post reports that a list it reviewed includes “voices from regulated industries, academics and environmental regulators from conservative states, and researchers who have a history of critiquing the science and economics underpinning tighter environmental regulations.”

Months ago, Pruitt didn’t renew many scientists’ appointments to the Science Advisory Board and the Board of Scientific Counselors. Around the same time, the EPA administrator first floated his idea to form red and blue teams to debate the scientific consensus that humans are causing dangerous climate change. Tom Burke, a former Obama EPA science adviser who in the past served on the Science Advisory Board, told me at the time that Pruitt’s red-blue team undertaking on climate science “in concert with the tremendous budget cuts to the agency’s science capacity, dismissal of world class scientists on the Board of Scientific Counselors [and the] Science Advisory Board…are warning signs for the broader scientific community.”

Current SAB advisors have tried to meet with Pruitt to “allow for a dialogue on how best the SAB can work to ensure the highest quality science supports Agency’s policies and decisions,” the Post reports. But the Washington Post’s conclusion says it all: “Pruitt has not met with the group.”