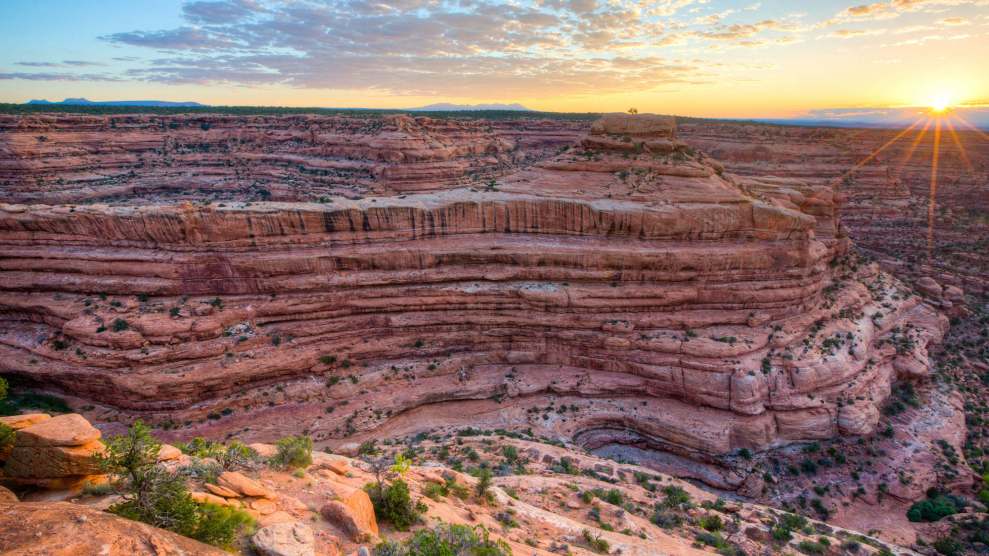 In his speech from Salt Lake City, Utah, on Monday, President Trump called the national monuments he was there to shrink a “natural bounty” that the nation should put “to great and wonderful use.” In this administration, “natural bounty” and “great and wonderful use” do not necessarily refer to the monuments’ beauty and cultural value, but to the vast potential oil, gas, and coal reserves beneath them.

Trump’s actions Monday foreshadow the much wider stakes of his presidency: Beyond monuments, many federal lands sit on top of fossil fuels, and he has wide latitude to open them up to more development.

This is the first relatively comprehensive inventory of federally protected land intersecting with oil, coal, and gas deposits. Unearthed compared fossil fuel estimates from the US Geological Survey, Energy Information Administration, and Alaska Department of Resources with federal land data from the Geological Survey, using mapping software to calculate the percentages of federal land acreage that overlap.

Their interactive map shows the overlay:

The investigation builds on Unearthed’s original analysis in May, published by Bloomberg, which looked only at the 27 monuments under review by Trump. That data showed more than 90 percent, or 1.34 million acres, of Bears Ears and more than 40 percent of Grand Staircase-Escalante overlapped with possible fossil fuel reserves.

The government only estimates the amount of coal, oil, and gas that might be there; it doesn’t necessarily indicate that the sediment is readily accessible or financially profitable for industry to mine. But it offers an indication of the scope of lands that might be eyed by the Trump administration to put to other uses, such as leasing to industry for the extraction potential.

Under that logic, not only the national monuments that Trump has already threatened, but many other lands considered as national icons and local treasures could be coveted for their potential deposits. The list includes Glacier National Park in Montana, the George Washington National Forest in Appalachia, and North Dakota’s Dakota Prairie Grasslands among them. The Senate voted Friday to open the Arctic National Wildlife Refuge for drilling; nearly half of the Yukon Flats—a 9 million acre wildlife refuge that lies just south of ANWR—overlaps with these fossil fuel estimates, as well.

Trump only sees dollar signs and a new way to pad the pockets of his oil and gas buddies.”

In Trump’s rush to establish “energy dominance” many of these lands could be in jeopardy, warns Greenpeace.

“Instead of seeing breath-taking vistas, irreplaceable cultural and historic sites, and a place for people to enjoy for generations to come, Trump only sees dollar signs and a new way to pad the pockets of his oil and gas buddies.” Greenpeace US senior energy campaigner Diana Best tells Mother Jones. “Chopping up and carving up national monuments and historical places for fossil fuel extraction isn’t just short-sighted and selfish, it is morally and ethically wrong.”

Federal lands have varying levels of protection, and the Trump administration could conceivably alter the rules and environmental assessments to become friendlier to drillers.

For example, Trump’s Interior Department could change the rules for which national forests it deems “wilderness”—and off-limits to roads and other kinds of development—and what areas will be put to other uses, such as sale for leasing. Parks and monuments also face varying rules on whether they will be open for some kinds of activities beyond recreation, and whether the land around it is protected as well. In an executive order earlier this year, the Trump administration ordered agencies to review rules impeding oil and gas development; if what are known as National Park 9b rules are repealed, there could be an uptick in private drilling for oil, gas, and minerals, with the government leasing more mineral rights to individuals for what lies beneath the public lands.

“Even under a more ordinary Republican administration, the public use planning process is more favorable to extraction,” says UCLA law professor Sean Hecht, who specializes in environment and public lands. “[Interior’s] job is to look ahead next five years or longer to figure out how to designate what areas of the national forest are protected.”

If Interior holds more lease sales in lands that were traditionally considered wilderness, it could become nearly impossible to reverse. Many newly designated monuments will honor existing fossil fuel leases. And once a pristine area is disrupted by drilling or by roads, it becomes harder for future administrations to return its status to that of a wilderness designation.

“The other thing we could see longterm increases in coal and oil leases,” Hecht says. “In those situations, once they start the ball rolling, it will be difficult to stop it. It depends on how long the president is in power and it depends on exactly what actions they take but these leasing programs tend to take place over a very long period of time. Some of these actions will impact well into the future.”