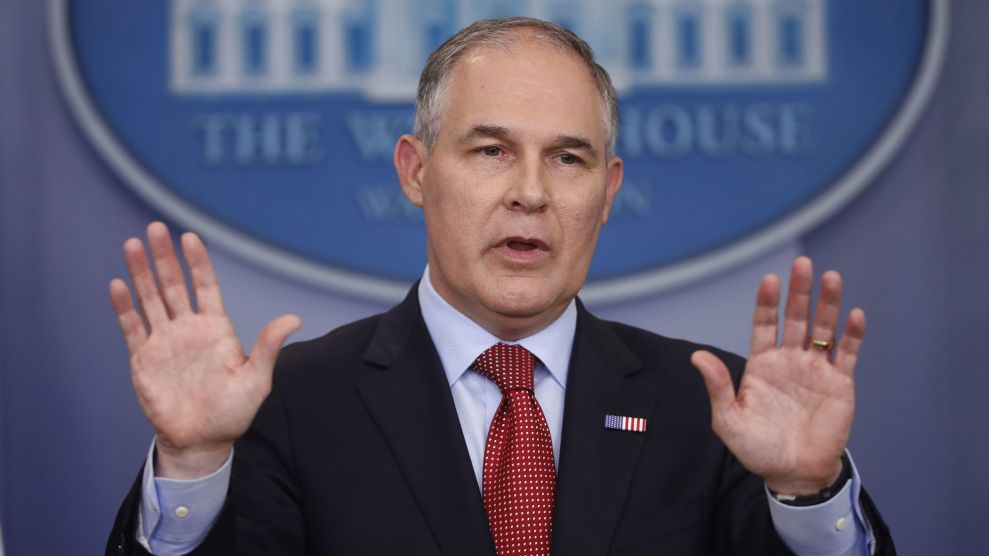 Update: An executive for Definers provided a statement to E&E News, announcing it was withdrawing from its contract with the EPA.

Definers Corp., the Republican public affairs firm, has decided to forgo its media monitoring contract with @EPA. Here's the statement from @PounderFile. More to come in @EENewsUpdates pic.twitter.com/rz4ElnzTn2

In a letter to Pruitt, the senators raise a slew of concerns about the Environmental Protection Agency’s decision to hire Definers on a no-bid basis, as first reported last week by Mother Jones. Whitehouse and Harris highlight Definers’ extremely close ties to a prominent GOP opposition research outfit, the fossil fuel money that has flowed into Definers and its partner organizations, and public-records requests made by a Definers executive seeking the emails of EPA employees that may have spoken out about the agency’s direction under Trump. The EPA employees have said they viewed the requests as attempts to intimidate or bully them into silence.

“EPA’s contract with Definers risks further politicizing the agency and is another instance of EPA under your tenure becoming captured by the industry it regulates,” Whitehouse and Harris write. “At a minimum, it presents an appearance of impropriety to which you as Administrator should never be a party. For the reasons that follow, you should terminate this contract immediately.”

As Mother Jones has reported, the EPA has committed to pay the firm $120,000 a year to use the Definers Console, a media-tracking technology that’s marketed as part of the company’s self-described “war room” services. In defending the deal, the EPA and Definers have pointed to its services being $87,000 cheaper than the agency’s previous media tracking contractor. However, critics say it was inappropriate for the EPA to grant its contract to a partisan firm and without soliciting any competitive bids.

Definers Corp., the senators’ letter points out, shares an address and multiple staff members with America Rising, a political action committee that boasts it was created “for the sole purpose of exposing the truth about Democrats through video tracking, research, and communications.” Matt Rhoades, Mitt Romney’s 2012 campaign manager, is the founder of both Definers and America Rising. Joe Pounder is the president of both organizations; his online bio proudly cites a claim describing him as “a master of opposition research.” Brian Rogers, a senior vice president at Definers, is also the executive director of America Rising Squared, the anonymously funded nonprofit arm of America Rising.

Whitehouse and Harris note that Definers and America Rising have not only received money from fossil fuel interests but that America Rising developed a website and assembled videos pushing Pruitt’s nomination. (The Senate confirmed him in February 52-46.) “Hiring a public relations firm with abundant ties to industries you regulate, which is itself part of a broader network of groups active on behalf of you and fossil fuel interests, suggests that you have handed industry the keys to EPA,” the senators write.

At the end of the letter, the senators ask Pruitt to clarify why the Definers contract was no-bid and sole solicitation, and to provide copies of all communications between the EPA and Definers, America Rising, America Rising Squared, and another Definers-connected group since Pruitt’s nomination as administrator.

Whitehouse and Harris join a chorus of opposition asking questions about the contract. On Monday, the Environmental Working Group and American Oversight, a Trump administration watchdog, asked the EPA’s inspector general to investigate the no-bid contract. Also on Tuesday, the government accountability group Public Citizen, writing on behalf of two left-leaning PR firms, filed a similar protest with the Government Accountability Office. The complaint cites EPA claims, made to Mother Jones and the New York Times, that the agency hired Definers for “media monitoring/newsclip compilation.” As potential competitors for such services, Fenton Communications and New Heights Communications have asked the GAO to recommend that the contract should be rescinded.

“Everything about this contract looks bad,” said Robert Weissman, the president of Public Citizen. “In the best case scenario, the contract was outrageously issued on a sole-source basis for work that dozens of firms could perform, to a partisan firm that just so happens to be investigating EPA employees for opposition to Trump’s anti-science agenda. In the worst-case scenario, something far more nefarious is going on.”

Read the letter by Sens. Whitehouse and Harris: