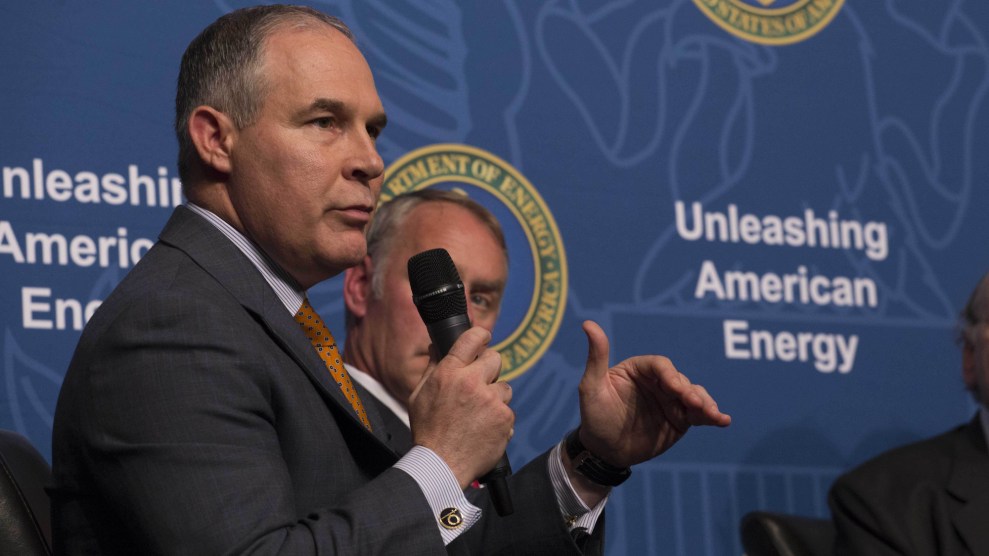 The Republican PR firm that was awarded a $120,000 EPA contract for media monitoring has pulled out of the deal, days after Mother Jones first revealed the controversial arrangement. The no-bid contract drew widespread scrutiny in recent days, in part because the for-profit firm, called Definers, is overtly partisan and is connected to a network of GOP political groups, including America Rising and America Rising Squared, that have performed opposition-style research on environmentalists. Definers itself specializes in opposition research and what it calls “war room”-style media monitoring.

“Definers offered EPA a better and more efficient news clipping service that would give EPA’s employees real-time news at a lower cost than what previous administrations paid for more antiquated clipping services,” Definers president Joe Pounder said in a statement on Tuesday. “But it’s become clear this will become a distraction. As a result, Definers and the EPA have decided to forgo the contract. We look forward to continuing to provide our cutting-edge Console war room products to our corporate clients but will no longer work with federal government clients.”

Four other government agencies had expressed interest in having @definersdc bid for media monitoring services. We have decided to forgo that.

Mother Jones first reported on Definers’ EPA contract on Friday. Later that day, the New York Times reported that an employee at the firm had filed a series of Freedom of Information Act requests seeking records from EPA staffers who had been critical of EPA administrator Scott Pruitt. The controversy continued to grow over the weekend. On Tuesday, two Democratic senators, Sheldon Whitehouse (R.I.) and Kamala Harris (Calif.), called for the contract to be canceled. The senators quickly got their wish.