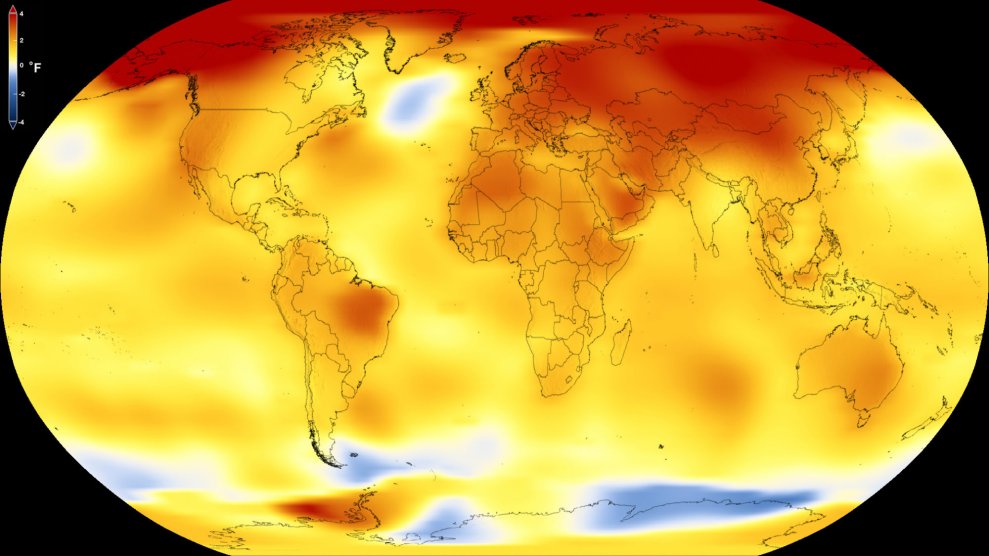 It’s official: 2017 was one of the hottest years ever recorded on Earth. On Thursday, NASA reported that only 2016 was warmer.

Every year, NASA collects data on the planet’s temperature record and releases a report that explains climate trends. On average, the planet’s surface temperature has risen about 2 degrees Fahrenheit during the last 100 years, a change that can be blamed on the increasing amount of human-made emissions, such as carbon dioxide. “[T]emperatures over the planet as a whole continue the rapid warming trend we’ve seen over the last 40 years,” Gavin Schmidt, director of the Goddard Institute for Space Studies that conducted the study said in a press release.

Notably absent in 2017’s climbing temperatures was the presence of El Niño, a weather pattern that warms up the Pacific Ocean and contributed to 2016’s record-setting heat. Still, in 2017, the US spent a record $306 billion on climate-fueled catastrophes, including 16 billion dollar disasters such as the California wildfires and Hurricane Harvey in southeast Texas.

The National Oceanic and Atmospheric Administration, which also follows the Earth’s temperatures but uses a different method from NASA, concluded that 2017 was the third warmest year—after 2016 and 2015.

This new data means that 17 of the 18 hottest years on record have all occurred since 2001. “What we’re seeing is an increasing string of years of temperatures more than 1 degree above the pre-industrial era,” Schmidt told the New York Times, “and we’re not going to go back.”