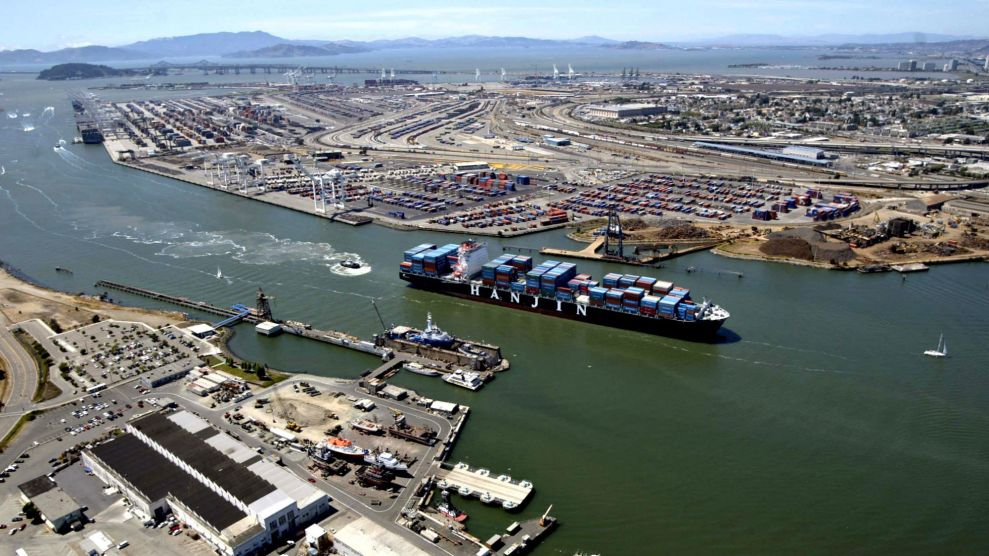 For the past three years, developers have been pushing to make Oakland the home of the largest coal-export facility on the West Coast, looking to move millions of tons of coal through its port every year. There’s one big problem: Just about no one in Oakland actually wants that.

It already has one of the largest ports in the country, handling about 2.5 million shipping containers per year, sending goods like clothes, electronics, dried food, wine, and paper overseas. Back in 2012, Oakland-based developer Phil Tagami won a contract to expand the port’s operations by turning a portion of the former Oakland Army Base into a multi-commodity shipping facility, Oakland Bulk & Oversized Terminal LCC (OBOT).

“A coal export terminal will have horrific impacts on the health and safety, indeed the very lives, of West Oakland residents…”

At the time, Tagami assured the city he had no interest in handling coal, but in 2015, he changed course; his company sought a $53 million deal with coal-mining counties in Utah that would bring coal from the state through Oakland and off to willing buyers in Asia. The deal would raise US coal exports by an estimated 19 percent, according to the Sierra Club.

The plan, though, is still stuck in limbo. A wave of anti-coal protests followed OBOT’s deal, and the next year the city passed an ordinance banning the storage and handling of coal, citing “substantially dangerous” health conditions caused by coal dust. City neighborhoods, including West Oakland, already “bear the brunt of health-related impacts” caused by industry, the ordinance says, and see disproportionately higher rates of asthma, premature births, and cardiovascular disease.

The battle for the future of the city—and the health of a chunk of its some 420,000 residents—is now on the precipice of its breaking point, as a federal judge starts to hear testimony from the project’s managers, environmental experts, and government officials this week. But the fate of Oakland isn’t the only thing on the line. As a state recognized for its environmental consciousness and leadership, introducing an immense coal-export facility in Oakland, government officials argue, would be a step backward for both California and the country.

“On the local level, what’s at stake here is the health and safety of Oakland’s already most vulnerable residents,” the city’s mayor, Libby Schaaf, who supports the city’s coal transport ban, tells Mother Jones in an email. “On a broader level, it’s the health and safety for all of us and the hope that success here can be a success for environmental justice throughout the country.”

Inside the courtroom on Tuesday morning, just as the trial was kicking off, the scene was low-key despite about dozen protesters wearing bright red “NO COAL IN OAKLAND” shirts in attendance.

The lawsuit was filed back in December 2016 by Tagami—a friend and former fundraiser of Governor Jerry Brown—claiming the city’s coal ban constituted a breach of contract and and violated federal trade and commerce laws. The city, though, argues the ban is a legitimate measure necessary to protect the health of its citizens, and many top state officials agree. California Attorney General Xavier Becerra said in a 2017 press release that Oakland’s ban on coal handling within city limits was a “legal right” and the California Department of Justice offers their “full-fledged support.” “Breathing clean air should not be a privilege for the few, but a right for all,” he said in a statement.

A 2016 report commissioned by Oakland’s City Council found that coal trains would “exacerbate already poor air quality” in Oakland, and that two schools, a child care center, and a park within 1,000 feet of the port rail yard would be “directly affected.” On top of that, West Oakland residents already face seven times the risk of cancer due to particulate matter emissions from port operations alone, compared to the rest of the region, according to an amicus brief submitted by Becerra on behalf of the city.

West Oakland residents already face seven times the risk of cancer due to particulate matter emissions from port operations alone, compared to the rest of the region.

“Oaklanders understand that a coal export terminal will have horrific impacts on the health and safety, indeed the very lives, of West Oakland residents, particularly children, who are disproportionately African American and other people of color,” Oakland City Attorney Barbara Parker tells Mother Jones in an email. “We are continuing to vigorously defend the city’s lawful policy banning storage and handling of coal.”

On the other side, a 2015 report prepared for the developer’s firm found that the amount coal dust in this case would be “negligible,” since they claim the rail cars would be covered. It concludes, “public health and the environment will not be harmed by the limited emissions” of coal transport and handling. Tagami also testified Tuesday that if the project were to exceed environmental air quality standards, he would be required to stop operations immediately. The real issue, Tagami argues, is a contractual one.

“We’re committed to meet all the terms of our agreement, and follow them,” Tagami said from the witness stand. “We would like to bring this project to conclusion. It’s been a lot of hard work and there’s still more work to do, so we’d like to get back to it.” (Tagami’s lawyer declined to be interviewed for this story.)

The final day of trial is scheduled for Tuesday, January 23—a day that probably can’t come soon enough for the city. The legal battle has already cost Oakland $1.4 million in attorney’s fees, according to recent analysis by the San Francisco Chronicle.

“When we are up against high-priced law firms spending on the other side, we can’t just use second-tier lawyers for our side,” Councilman Dan Kalb told the Chronicle. “Not that we are using the most expensive we can get, but they are very good lawyers and not necessarily cheap.”

The verdict in the case, of course, won’t only impact the health of Oakland residents. As an area particularly vulnerable to sea level rise, Oakland and many of the protesters argue that exporting coal would indirectly harm their coastal city—not to mention a slew of other vulnerable coastal areas across the globe. If power plants burned all the coal OBOT wants to export, it would produce 13.8 to 15.65 million metric tons of carbon dioxide per year, city-commissioned analysis claims.

“We do feel a responsibility to the people of the world,” Ted Franklin, a coordinator for the No Coal in Oakland environmental group which is leading a large contingent of protests against OBOT, tells Mother Jones. “Coal is the most toxic and polluting fossil fuel. We’re very concerned about burning it and contributing to global warming.”