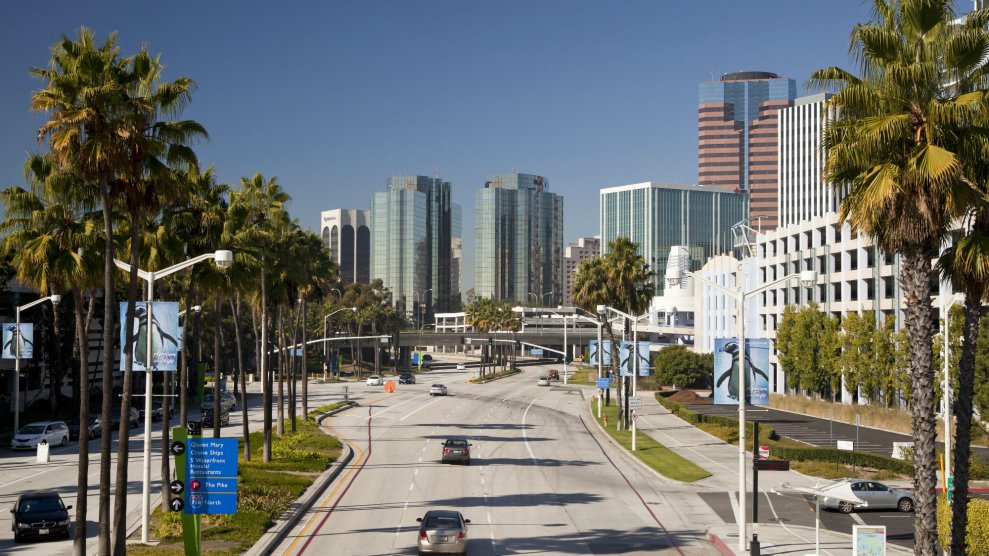 In a coastal city, it’s easy to assume the greatest climate threat comes from the rising ocean. But in Long Beach, California, the biggest danger is not the sea, but the sun.

“We have to deal with sea-level rise,” Long Beach Mayor Robert Garcia said. “But it’s not our biggest challenge. The increase in temperature is the real concern right now. It’s top of our list.”

These higher temperatures are especially prevalent in the city’s urban heat islands, which tend to have a lot of cement and fewer parks or trees—and are often concentrated in low-income communities, Garcia said.

Garcia, who was born in Peru, became mayor of Long Beach in 2014 at the age of 36. In his 2015 State of the City address, he declared his intention to make Long Beach a “climate-resilient city.” That same year, he commissioned the Aquarium of the Pacific to conduct an assessment of the city’s vulnerabilities and recommend potential solutions. Its report singled out the young, poor, and elderly among the city’s 470,000 people as most vulnerable to the heat.
“People always say, ‘Climate change is going to affect my kids,’ but it’s older folks too. Young people have grown up with it—it’s one of our biggest threats. But the elderly don’t view it as so pressing.”

“People always say, ‘Climate change is going to affect my kids,’ but it’s older folks too,” Garcia said. “Young people have grown up with it—it’s one of our biggest threats. But the elderly don’t view it as so pressing.”

Emily Yam, the science interpretation manager at the aquarium and a co-author of the report, agreed that being young, elderly, or living in a low-income area makes people more vulnerable to heat. “But we also find other factors may increase those populations’ vulnerability,” she said, “such as access to transport and lack of air conditioning.” In this coastal community, many people don’t have air conditioning. The city operates cooling centers in public facilities on hot days.

City Hall has a plan to create more parks and plant 10,000 trees in low-income areas of town to combat the heat. One study carried out at a local elementary school, and another at an office complex, showed that tree shade could reduce temperatures by as much as 3 degrees.

Located in a semi-arid region with limited natural freshwater supplies, Long Beach relies on external water reserves and, despite record-breaking rainfalls in January 2017, water use prohibitions are still in effect. In an average year, the Long Beach Water Department (LBWD) obtains 40 percent of its water from imported sources and 53 percent from groundwater—which is also partially dependent upon imported sources for recharge. Recycled water accounts for just 7 percent of the city’s water supply.

The aquarium’s climate-resilience report noted that plans to increase recycled water have “not yet been realized,” and suggested that imported supplies will become less reliable by 2050, even as demand increases as a result of warmer summers.

Since creating new green spaces may entail water problems, Garcia has turned to infrastructure and planning as another long-term strategy.

“We’re rethinking how to design a community. We’re introducing bike lanes and new public transit to decrease dependency on cars, which will help mitigate the temperature rise,” he said.

Garcia has long championed bike lanes. A flurry of them were built before his election as mayor, but the network was inconvenient: Thanks to a little-known municipal law, cyclists had to register bikes at a local fire station and faced fines of up to $400 if they failed to do so. Garcia, then a city councilman, introduced a measure to eliminate the registration in 2011 and it was eventually scrapped.

However, when Long Beach looked at expanding bike lanes in 2014, there was a backlash. “Every time you remove a car lane, people are concerned about their access getting to and from somewhere,” the mayor said.

But the city plowed ahead with plans to implement a road diet—removing one lane of car traffic in each direction between 7th Street and Orange Avenue and adding new bike lanes.

It also introduced a bike share in March 2016, using a $2.3 million grant awarded by the Los Angeles County Metropolitan Transportation Authority, which means the bike share operates without cost to Long Beach residents.

Michael Bohn, the design director at Studio One Eleven, a local architecture firm, has noticed a marked uptick in developers integrating climate resilience into projects in Long Beach.

More banks—such as Fargo Wells and Bank of America—are requiring developers of affordable housing projects in California to meet LEED Silver standards for financing, he said. “That’s forcing some who weren’t interested in sustainability to include it in their designs, which was unheard of even three years ago.” Developers are also planning greener buildings to try and win state tax credits for affordable-housing projects, he said, by installing energy-efficient air conditioning in low-income units and other measures.

“That’s forcing some who weren’t interested in sustainability to include it in their designs, which was unheard of even three years ago.”

One such development for seniors, designed by Bohn’s firm, was completed in 2013 in an underserved area of Long Beach, and had a 400-person waiting list. It includes community gardens, white roofs—to reflect the sun and limit heat absorption—and a sustainable planting and irrigation system, using plants that need minimal water.

Bohn’s next project is working to turn chunks of Long Beach’s city center into eco-districts. This involves thinking creatively about the bigger picture of ecological design: What’s the best way to capture rain water? How can trees be planted on a broad scale?

“The city owns three massive parking structures in a six-square block,”  Bohn said. “We’re working with them to put solar panels on the roofs, so that sunlight can operate all three of the public parking lots.” The project has been approved by the city council and a private solar-panel provider is contracted to start work next year. If successful, there are plans to roll the strategy out to other structures in Long Beach.

A costly plan to clean up the port

The Port of Long Beach is the second-busiest container port in the country and supports an estimated 30,000 local jobs. It and its sister port in L.A. also make up the largest stationary source of air pollution in Southern California. Since air pollution is closely linked to rising temperatures, tackling this is a top priority for the city.  In June, Mayor Eric Garcetti of Los Angeles and Garcia announced a joint emissions declaration for the ports of Long Beach and L.A. This was adopted by the two boards of harbor commissioners.

The Clean Air Action Plan calls for imposing fees on old diesel trucks entering port terminals, in an effort to shift to natural-gas vehicles. The plan also requires terminal operators to transition to zero-emission cargo handling equipment by 2030 and would expand the use of emission capturing devices in the port to reduce pollution from cargo ships.

Cargo-moving industries and truckers have criticized the plan, which was pushed through in early November, citing the hefty price tag of cleaner equipment as the predominant issue. Pacific Merchant Shipping Association president John McLaurin said in a statement, “Our concerns remain about the [plan’s] $14 billion cost and its potential negative impacts on port competitiveness.” He also raised concerns about the “one in nine jobs in the Southern Californian region” that he said are reliant on the ports.

It is not clear who will front the huge costs, although the plan states that aside from “any state and federal funding that can be secured,” the bill will be paid by the port and private industry.

“A lot of industries are fighting the plan. But that’s typical. If you’re not a little bit aspirational then no one will ever get there,” Garcia said.

Long Beach is not alone in its battle against temperature. Los Angeles County as a whole has the highest number of residents in California who will be exposed to extreme heat and at increased risk of heat-related health problems. A study by UCLA from 2012 projected the Los Angeles region to be 3 to 4 degrees warmer by mid-century, with dense urban areas such as downtown L.A. and the San Fernando Valley warming by an average of 4 degrees.

“There’s nothing geographic about Long Beach that would make heat rise worse here, compared to other immediate surrounding areas,” Yam said. “But the fact that Long Beach is a highly—and densely—populated urban system is what makes more high-heat days and longer heat events an issue.”

The aquarium has converted its dense climate resiliency report into a digestible online document with practical advice for citizens. It recommends replacing “thirsty lawns” with California-friendly landscapes, such as rock gardens and drought-tolerant plants; contacting your utility company to find out how to keep your home cooler in energy-efficient ways; cycling rather than driving when possible; and checking on elderly or vulnerable neighbors during heatwaves.

“In the past, the dialogue on climate-change solutions has always been about mitigation,” Yam said. “We want people to realize that there are also adaptive, actionable solutions that can be done today. Caring for your neighbor is an example of climate resilience. Checking on them on a high-heat day, or bringing them groceries on a hot day, is a simple act, but something that could save their life.”