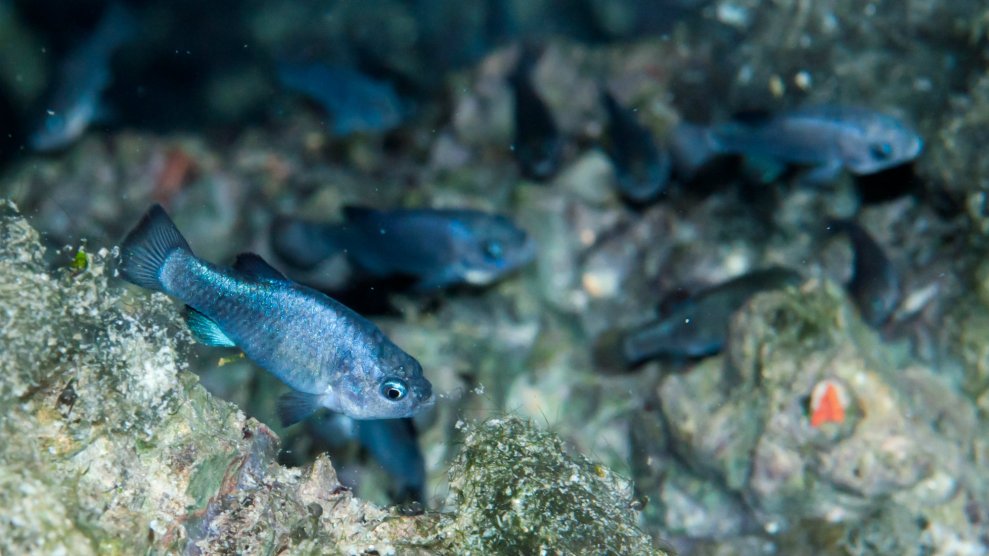 The West is a challenging place to live these days, with fires and mudslides, droughts and heat waves—to say nothing of the political climate. But the West’s residents are nothing if not resilient, and that includes the nonhumans. High Country News rounded up a few recent favorite examples of animals—from bears to mosquitoes—surviving in these tumultuous times.

Crisis can bring a population together—to spawn, in the case of one fish species. In the early morning hours of Jan. 23, a magnitude 7.9 earthquake struck in the Gulf of Alaska, approximately 170 miles south of Kodiak. Minutes later, some 2,000 miles away, the quake triggered foot-high sloshing in Devils Hole, a water-filled cavern in Death Valley National Park. The hole is the home of the critically endangered Devils Hole pupfish, which numbered 115 at last count. But park staffers are not worried about the earthquake’s effects on the fish. According to Ambre Chaudoin, a biological technician at the park, the pupfish respond to disturbance by mating. The males have turned a brilliant blue, their spawning color. “Several males will chase a female,” says aquatic ecologist Kevin Wilson. When the female is receptive to a single male, he will continue chasing until she is ready to spawn. Then they form an “s” shape together, and the female will lay a single egg that the male fertilizes immediately. Although the pupfishes spawn year-round, the peak usually occurs in the spring, not January.
Sometimes, all you need to take a big leap is a fire lit under you at just the right moment. Like the Thomas Fire, for one condor chick. According to Audubon, Condor 871—known by the number the U.S. Fish and Wildlife Service’s Condor Recovery Program assigned to her—wouldn’t fledge, staying in the nest long after most condor chicks leave home. The Thomas Fire burned through the canyon north of Los Angeles where she lived when she was seven months old, and the radio signal from her tag vanished. Two weeks after the Thomas Fire, condor 871 reappeared with singed wings. Biologists concluded that the condor, who had been taking short practice flights in the days before the fire, may have finally fledged because her nest was about to ignite.
There’s more than one way to patch a bear. The Thomas Fire—the largest in California’s history—destroyed homes and hurt animals. But help came through in one unexpected way: Two bears and a mountain lion cub with severely burned paws received the first tilapia skin treatments in the U.S. It’s a treatment that has been used on humans in Brazil, but never before been tried here. Researchers from the University of California, Davis, and California’s Department of Fish and Wildlife sutured sterilized tilapia skins to the animals’ paws, according to a press release. After the procedure, one bear stood on her feet, after days of holding them off the ground. The bears recovered much more quickly than they would have with traditional burn treatments, and are already back in the wild. Plus there’s no harm done if the animals gnaw off their tilapia grafts, as the baby mountain lion quickly did. He was too young to be on his own when he was found, and will go to an animal sanctuary when he has fully healed.

Even spineless pests can learn that no means no. Scientists in warmer regions of the West, especially the Southwest, have worried for years about the potential for climate change to increase incidences of mosquito-borne illnesses such as dengue, chikungunya or Zika, all of which are carried by Aedes aegypti. Scientists in West Virginia recently found that mosquitoes of that species learn and remember people’s smells, developing preferences for different species and even individuals. While scientists don’t know what attracts mosquitoes to particular people, the good news is that they also learned these mosquitoes can be trained. If you swat at a mosquito enough, she may learn to avoid you, no matter how attractive she thinks you smell.

Tiny acts of survival make an ocean of resilience. Pteropods, also called sea butterflies, are pinhead-sized marine snails that are important food sources for animals such as whales and salmon. Marine biologists have long known that human-caused carbon dioxide emissions are causing ocean acidification, which kills sea butterflies by weakening and crumbling their shells. Recently, though, sea butterflies near Greenland have been found repairing their shells from the inside with calcium carbonate patches. The outside of their shells have also proven more resistant to corrosion than expected. If the tiny creatures turn out to be more resilient to an acidifying ocean than anticipated, that could mean that marine food webs in places such as the Pacific Northwest—where the ocean is naturally more acidic to begin with—may be more able to withstand climate change.

Note: This article has been updated to correct a misspelling of the name of Ambre Chaudoin, a biological technician at Death Valley National Park.