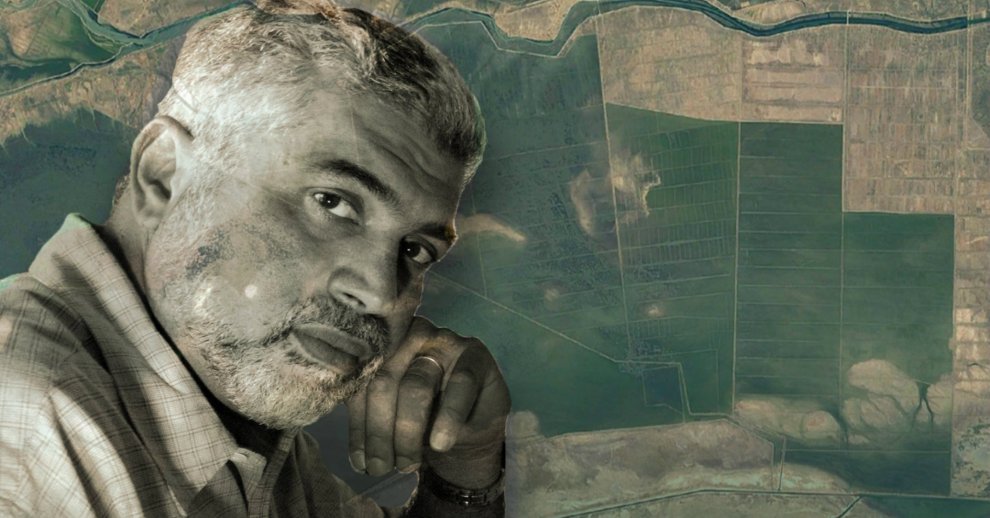 Azzam Alwash, the man credited with restoring the Iraqi marshlands believed to be the biblical garden of Eden, is ready to say something controversial: He welcomed the war.

Even now―15 years after US forces invaded Iraq, ending nearly a quarter-century of Saddam Hussein’s rule and starting a war that has killed at least 1 million Iraqis and continues to destabilize an entire region―he sees the good that came of it.

“The invasion of Iraq has resulted in a net positive for the nature in Iraq,” he told HuffPost by Skype from his office in Amman, Jordan. “A lot of good things have happened, environmentally speaking, after the removal of Saddam.”

Born in Nasiriyah, a southeastern Iraqi city, Alwash spent part of his childhood paddling a wooden boat with his father, a district irrigation engineer, through the towering reeds of the ancient marshlands between the Tigris and Euphrates rivers. In the early 1970s, upstream dams began to reduce water in the wetlands, which many scholars believe to be the site of the biblical God’s garden, the birthplace of Abraham and the setting for scenes from the Epic of Gilgamesh.

In 1978, Alwash moved to California, where he earned a doctorate in engineering, married a Texan and had two daughters. In the 1990s, he watched in horror as Hussein dammed, drained and destroyed the ancient marshes to punish and root out the Shiite rebels who hid there. Alwash founded a nonprofit with his then wife, Suzanne, to advocate for conserving the area.

After the United States invaded Iraq in 2003, Alwash left his wife and daughters in Los Angeles to head into the war zone, where he found Marsh Arabs, as the region’s tribal inhabitants are known, already working to puncture holes in the dams and levees that had shrunk the marshlands by 90 percent. He led a team of scientists and engineers to develop a plan to restore the marshes, and founded the nonprofit Nature Iraq to teach Iraqis about environmental stewardship.

By 2013, the year he won the Goldman Environmental Prize, the so-called “green Oscar” award, nearly 50 percent of the marshes were replenished. A few months after receiving the award, Alwash established the area as Iraq’s first national park, protecting 386 square miles of an area roughly half the size of Florida Everglades and home to 28 of the country’s most unique birds.

“Educating a society on the importance of protecting the environment while they are living in a country ravaged by war and insecurity is enormously difficult.“

“Educating a society on the importance of protecting the environment while they are living in a country ravaged by war and insecurity is enormously difficult,“ Ilan Kayatsky, a spokesman for the Goldman Prize, told HuffPost by email. “Preserving natural resources has not been a priority of the Iraqi people or their government, but it became a focus for Alwash.”

But Alwash warned that while deconstructing Hussein’s water diversion infrastructure has allowed some water to the marshes, the environment is not what it once was.

The freshwater that once filled the marshes is now brackish as a noxious mix of political jockeying and warming global temperatures are cutting off Iraq’s water at the source.

Climate change is making rainfall erratic in Iraq, causing river levels to drop by 40 percent in recent decades, the country’s water ministry told Reuters in December. In Turkey, Iran and the autonomous Kurdistan region, new hydropower dams and infrastructure projects that are being built to feed the faucets of growing cities threaten to pinch the flow of mountain meltwater into Iraq’s rivers. Since the end of the last ice age, the marshes have relied on springtime floods to replenish their water levels, wash away the salt and fertilize the soil with nutrient-rich clay and silt from the mountains. Ancient Sumerians celebrated the annual flood as a gift from Inanna, the goddess of fertility.

“It’s a symphony of biodiversity,” Alwash said. “Everything is dependent on the note, and the note is driven by the drumbeat of the annual floods.”

“It’s a symphony of biodiversity. Everything is dependent on the note, and the note is driven by the drumbeat of the annual floods.”

New upstream projects are also expected to slow the volume of water.

For decades, Iraq has struggled with water reductions as a result of dams in neighboring Turkey. But the Ilisu dam, a controversial new hydropower station set to begin operations in the coming months on the Tigris in southeast Turkey, could reduce the river’s flow into Iraq by 56 percent, according to an Iranian official who warned that Iran may also suffer. The dam is part of the Southeast Anatolia Project, a long-planned infrastructure build up that includes 22 dams.

In Iran, a new dam on the Sirwan river put the flow of water into Kurdistan, the restive northern region of Iraq, in jeopardy. A campaign group called Save the Tigris sprang up in Erbil, the capital of Kurdistan, to advocate against it.

But the government in Kurdistan took its own measures to secure its water. Last March, officials in the region announced a set of roughly 20 small- and medium-sized dam projects aimed at protecting irrigation and drinking water supplies.

“The snowmelt in the mountains of Kurdistan is not how it used to be,” Alwash said. Without that freshwater, the agricultural plains in southern Iraq are becoming saltier and less able to grow crops, raising the risk of food shortages.

“If we are what we eat, then we’re all Kurds in one way or another.”

“If we are what we eat, then we’re all Kurds in one way or another,” he said. “That line gets a lot of applause in Kurdistan but it does not get a good reaction in southern Iraq. They don’t like the idea of being related in nature.”

More than half of Iraq’s population is already at risk of food shortages as a result of ongoing conflicts with militants, according to a U.N. World Food Program report last April. In 2015, at the peak of the so-called Islamic State’s control over huge swaths of the country, the militant group cut off the flow of water through a dam in Ramadi, in central Iraq. Food prices soared by up to 58 percent in some regions.

Alwash worries an arms race over water will make the region even more of a tinderbox. With his marsh projects well established, he now finds himself jet-setting around the world on a quixotic mission to convince policymakers to avert their attention from ongoing conflicts to consider the much bigger and, he believes, much more deadly, conflicts of the near future over water. He returned to Amman from Vienna just days before a recent interview, and planned to leave for Kuwait soon after.

The war to rout Islamic State from northern Iraq has brought other environmental crises. The militants routinely torch oil fields before retreating from an area, leaving thick clouds of smoke that blacken white sheep and burn for months. Worse yet, there is virtually no international funding set aside to clean up the pollution, according to a report published in November 2017 by the Dutch nonprofit PAX.

March marks the seventh year of civil war in Syria, a conflict that some call a “climate war” because it began with unrest sewn by the country’s worst drought in roughly 900 years. It also marks the third year of Saudi Arabia’s bombing campaign in Yemen. President Donald Trump’s decision to open a US embassy in Jerusalem has escalated tensions between Israel and Palestine. Turkey is increasing its military intervention into Kurdish-controlled parts of Syria.

Yet Alwash is hoping he can broker talks to begin cooperative water projects between Iraq, Turkey, Iran and other neighboring countries.

He said he’s ready to say something else controversial: militants like ISIS are actually right about one thing: The region needs to unite itself. Alwash said he envisions “a Middle East without borders, built on the idea of creating cooperation on water instead of tension.”

“The Islamists are looking for a borderless Middle East, they want to do it with Syria and political Islam,” he said. “I have the same goal. I want a Middle East without borders. But I want it with democracy and plurality of a political system.”

“The environmentalists of Iraq and the Islamists of Iraq have the same goal,” he added with a facetious laugh, “just a different roadmap.”