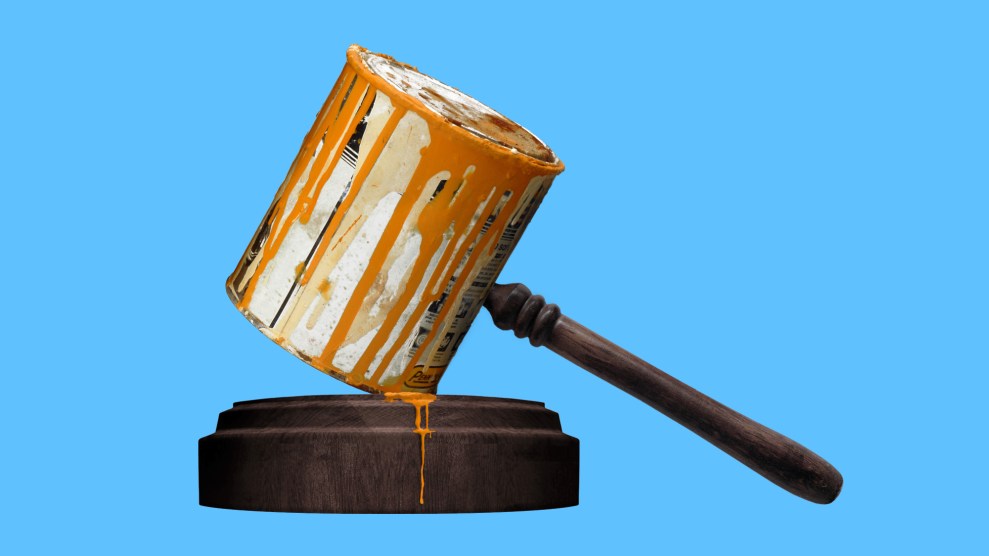 In 1998, Fidelma Fitzpatrick, a young associate at the Motley Rice law firm, was wrapping up her work on the groundbreaking $246 billion national tobacco settlement when a new case landed on her desk. The state of Rhode Island—which had a disproportionate number of children with elevated blood lead levels—wanted her firm’s help suing the paint industry.

So began a decadeslong legal battle to hold paint manufacturers accountable for cleaning up old houses still coated in toxins. Fitzpatrick played a key role in the Rhode Island case and now spearheads her firm’s involvement in similar litigation. And the argument she proposed using to take on the paint companies is being applied to a widening array of state and local public health lawsuits—especially important given the Trump administration’s apparent reluctance to regulate industries.

Very small concentrations of lead in the blood can permanently reduce IQ.

In the 1800s, manufacturers started adding lead pigment to their paint to help it dry faster and last longer. But by the middle of the 20th century, research had established the element’s serious health effects on humans, especially kids, including seizures, learning impairments, and developmental delays. Very small concentrations of lead in the blood can permanently reduce IQ, and scientists have even posited that elevated blood lead levels spurred a rise in violent crime from the 1960s to the ’80s. In 1978 the federal government banned lead pigment in paint, and unleaded gasoline started to replace leaded gas. Since then, average childhood lead levels have dropped by more than 90 percent. But an estimated 500,000 children under six years old are still exposed to concerning levels of lead. About 24 million American homes contain significant amounts of deteriorating lead paint and dust, and abatement can cost thousands of dollars per house.

Until Rhode Island’s lawsuit landed in Fitzpatrick’s hands, suits against paint manufacturers had generally been brought as product liability cases, in which plaintiffs must demonstrate that a specific product harmed them, and that its maker was at fault. But proving which company made the paint in an old building can be extremely difficult, and the industry successfully warded off dozens of cases. Lawyers needed a new playbook.

Searching through case histories, Fitzpatrick honed in on public nuisance law. This doctrine has roots in English common law and is defined as “an unreasonable interference with a right common to the general public.” Public nuisance litigation is wider in scope than product liability and allows the government to step in and clean up an ongoing threat such as environmental contamination from a polluting factory. Such an approach had never been applied to lead paint, but Fitzpatrick and her colleagues thought it might have a shot. “The tobacco cases were the first time that you saw public entities use the legal system in a large-scale way,” she recalls. “It was the perfect storm.”

In a 1955 letter, the Lead Industries Association described childhood lead poisoning as “mainly a slum problem.”

Key to the strategy was a trove of industry documents unearthed by professors David Rosner and Gerald Markowitz, co-authors of the book Lead Wars. The historians had surfaced a cache of letters and memos, some of which were later cited in court decisions, suggesting that some of the paint industry’s biggest players had long known about the health risks associated with lead paint yet continued to market it to homeowners. A Sherwin-Williams publication from 1900, for example, called white lead “a deadly cumulative poison.” In a 1955 letter, the Lead Industries Association’s director of health and safety described childhood lead poisoning as a “major headache” and “mainly a slum problem.” (The paint companies say they learned about the health hazards of lead paint at the same time as the public.)

Rhode Island filed suit in 1999, and a jury sided with the state in a landmark verdict in 2006. Two years later, though, the state Supreme Court reversed the judgment, agreeing with the paint companies that they did not have control over how their lead pigment was used at the time, and that the public had no right to a “certain standard of housing”—essentially, that public nuisance law didn’t apply to house paint.

But on the opposite side of the country, judges in California came to a different conclusion. In January 2014, in a case for which Fitzpatrick was co-lead counsel, a Santa Clara Superior Court judge found that paint-makers Sherwin-Williams, ConAgra, and NL Industries were liable for the “clear and present danger in the form of a public nuisance that needs to be addressed” in 10 California counties and cities. He ordered the companies to pay $1.15 billion toward abatement and consumer educational programs. In November, a California appeals court largely upheld the original ruling (though the judges narrowed the scope of the cleanup to homes built before 1951). The companies appealed to the state Supreme Court, which in February declined to hear their appeal. A lawyer for NL Industries said the paint companies now plan to appeal to the US Supreme Court.

Even so, the ruling could embolden public nuisance litigation in other arenas, affecting everything from childhood asthma to climate change, says Ray Brescia, a professor at Albany Law School. Several California cities and counties recently filed suit against major oil companies, including Exxon Mobil, arguing that promoting fossil fuels escalated the sea-level rise that threatens their communities. This public nuisance tactic, Brescia explains, offers an alternative route when the federal government is hesitant to step in. “We’re going to see people dusting off their briefs in this area,” he said.

But whether the three paint companies will have to pony up remains to be seen. In January, they donated $6 million to the campaign for a proposed California ballot measure that would declare “lead-based paint is not a public nuisance” and create a $2 billion bond to rehabilitate the state’s aging homes by cleaning up health hazards, including lead—paid for by taxpayers.