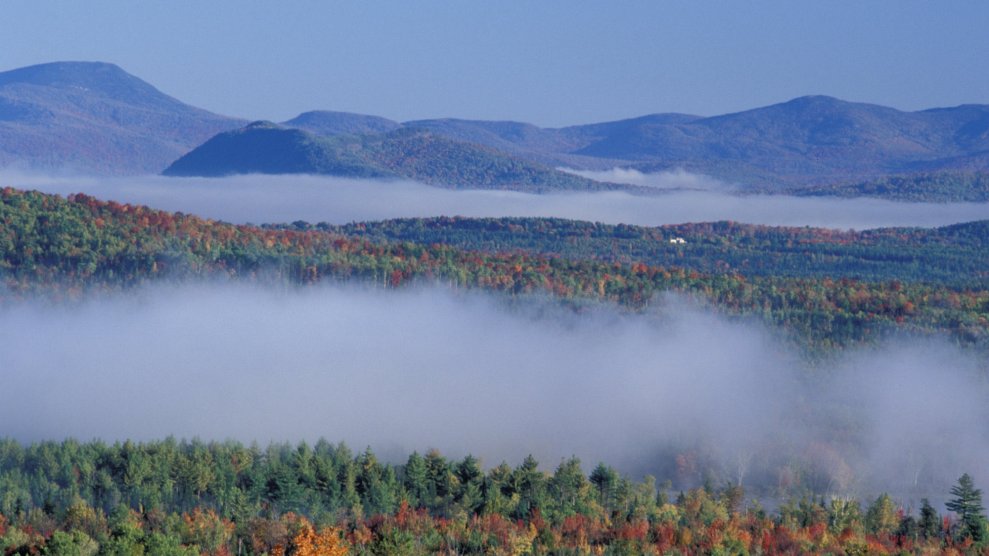 Nestled in the White Mountains of New Hampshire is a forest. It sits in its own little valley, full of wispy birch trees, beeches, and grand sugar maples. The skies are a cobalt blue and cold, clear streams run down into a small, mirror-like lake. It might seem like a great place for a hike.

But if you do go there one day, you might notice a few mysterious things out in those New Hampshire woods—trees dotted with tiny metal tags that jingle like the collars of a pack of dogs; someone off in the distance, shoveling snow from a seemingly nondescript patch of forest floor; a handful of trees coated in ice, as if just hit by the world’s most specific blizzard.

All of these seemingly mysterious goings-on have a purpose. Because this isn’t just a patch of woods. It’s the Hubbard Brook Experimental Forest—a 63-year-old, 7,800-acre living laboratory that’s helping scientists understand the world around us.

“We currently have about 60 different collaborators at Hubbard Brook,” says site manager Ian Halm. The collaborators are working on a wide variety of projects, from learning and monitoring how nutrients move through an ecosystem, to tracking animal populations over time, to learning how northern forests might respond to events like drought or climate change.

A forester by training, Halm’s been working here since 1990. His office is full of moose antlers he’s picked up while hiking or snowmobiling through the forest.

“Moose drop their antlers once a year,” says Halm, joking the animals always seem to drop them right in his path. “I have to pick them up, otherwise I’d trip on them.”

“Moose drop their antlers once a year. I have to pick them up, otherwise I’d trip on them.”

When he’s not picking up antlers, you might find Halm clearing away a fallen tree, plowing snow away from the roads, or helping set up and maintain the various data collectors, remote cameras, and wireless equipment the scientists depend upon.

“When I started it was all pretty manual, with strip charts and charts on drums,” says Halm. “Now it’s all electronic.” Every hour data is wirelessly uploaded to headquarters. And if something goes wrong, Halm knows almost immediately. Before, if something broke you might not know until you hiked up to check on it. “Now every morning we look at a computer screen.”

Not that that stops him from getting out into the forest. Halm’s favorite place, he says, is a gorge the brook runs through, with a good swimming hole at the bottom.

Though Hubbard Brook is open to the public (it’s technically part of the White Mountain National Forest), for more than 60 years, it’s primarily been a place of learning. In 1955, the U.S. Forest Service set it aside to study hydrology, ecology, and forest management and almost immediately, the site began to reveal surprises.

In 1963, a handful of scientists began to look at rain samples collected in the forest. It was immediately obvious something was wrong. The rain was incredibly acidic. One sample came back with a pH level roughly the same as vinegar. Eventually, the scientists were able to trace the cause back to industrial air pollution, and in 1972, they published their results in a scientific paper—the first official documentation of acid rain in North America. Their work would go on to spark public discussion and influence decision-makers and in 1990 President George H. W. Bush would amend the Clean Air Act to specifically address the dangers of acid rain.

Since then, scientists have continued to monitor water quality, air pollution, and a host of other variables in Hubbard Brook, accumulating decades of continuous data. A data set this old and complete makes Hubbard Brook extremely valuable from a scientific perspective.

“You really need to have places where you can look at long-term trends. It really helps us gauge what we’re doing to the environment.”

“You really need to have places where you can look at long-term trends,” says Halm. A single year or two worth of data might be valuable, but if you want a complete picture of what’s been happening over the decades, you need decades worth of data. “It really helps us gauge what we’re doing to the environment.”

Templer has her own set of experiments at Hubbard Brook. In one spot of the woods, not too far away from the red wooden headquarters, Templer and her team are using snow shovels and heating cables to study not acid rain, but another important long-term trend that may be affecting our forests: climate change.

“The idea was to create conditions that the forests are likely to experience in the coming century,” says Templer. Studies have predicted the Northeast may warm by as much as 10 degrees Fahrenheit by 2080, which could result in warmer growing seasons and less winter snow cover. By using the buried cables like underground space heaters to warm the soil and by manually clearing away the snow, Templer is simulating that warmer future world.

In previous experiments at Hubbard Brook, Templer found a potentially surprising nugget of information—less snow might actually make frosts worse. It turns out, the blanket of snow can act like an igloo, protecting the soil (and tree roots) from the freezing air.

“So in a world where you have less snow, you might actually end up with colder winter soils,” says Templer. Her team’s work, combined with monitoring the trees health and productivity, make up an experiment known as CCASE, which stands for Climate Change Across Seasons Experiment.

Many of the experiments, like Templer’s, purposefully manipulate aspects of the forest in order to learn more information, but there are also more observational studies, such as water quality sampling and the monitoring animal populations.

“Forests provide a whole suite of wonderful resources for us, including clean water, clean air, habitat for animals and plants,” says Templer. We need to know how they might change in the future if we want to preserve and manage them. Whether through logging, urbanization, or climate change, humans have been making an impact. Now we need to understand the true extent of it, and the Hubbard Brook Experimental Forest is one place to find out.