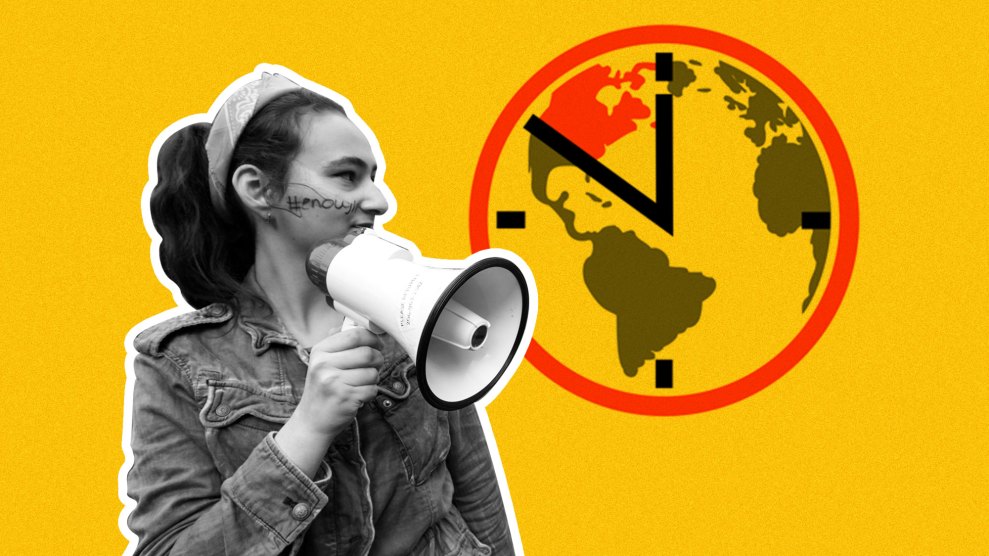 “Sorry, it’s homeroom,” Jamie Margolin, a 16-year-old climate activist and high school sophomore, tells me when I call for an interview. “Let me get to a quieter spot.”

Margolin, who lives in Seattle, is used to juggling homework, debate club, media interviews, writing op-eds, and community organizing. As a freshman, she interned for Hillary Clinton’s campaign. She volunteers with a local branch of Plant for the Planet, an international climate activism organization, and worked with Michael Foster, the Seattle activist now in prison for shutting off a Keystone Pipeline valve.

In February, the nonprofit organization Our Children’s Trust helped Margolin and 12 other kids file suit against the state of Washington for not doing enough to fight climate change. The suit accuses Gov. Jay Inslee and state agencies of violating their constitutional rights by permitting the continued emission of dangerous amounts of carbon dioxide. In 2008, Washington passed a law to cut its carbon emissions to 50 percent of 1990 levels by 2050, but the youth plaintiffs say that’s not enough; their lawsuit calls for a 96 percent cut by 2050. Our Children’s Trust has helped underaged plaintiffs take similar legal actions in all fifty states, including a lawsuit against the Trump administration under consideration in an Oregon federal court.

Last year, Margolin founded Zero Hour, described on its website as “a movement of unstoppable youth,” fighting for a clean, safe, and healthy environment that will “ensure a livable future where we not just survive, but flourish.” The organization now has teenage members across the country, and adult mentors such as Mrinalini Chakraborty, the Women’s March head of field operations and strategy.

“It’s like there is a ticking time bomb,” Margolin told me. “You have to work on stopping that. You can’t just ignore it.”

After Margolin found a quiet spot, we talked about environmental activism, growing up during the Trump era, and what she has planned for Washington, DC, this summer.

Mother Jones: When did you first become interested in environmental activism?

Jamie Margolin: Ever since I was little, I have always had a concern for the environment. I didn’t really act on it, because nobody really told me how. On top of that, I was always a huge political nerd. Instead of Hannah Montana, I grew up watching the Colbert Report, and the Daily Show. Nine-year-old me watching political satire. It’s still my favorite thing to watch. I was more of a consumer and worrier. There was just never an outlet for me to take that passion and put it into something, other than to write reports about it for school and feel pessimistic.

MJ: And then what happened?

JM: Then the 2016 election happened. I was 14, about to turn 15, and I went to a volunteer event for Hillary Clinton’s campaign, their first phone bank of the general election season. From there, I became an intern on her campaign. I’m Latina, and in the campaign office, I was the only fluent Spanish speaker. Someone called me because there was a voter intimidation case in Miami, and she could only speak Spanish. I was the 14-year-old intern, and I translated it, and the information got to the right people.

After the election, I was heartbroken. I decided to shift my attention to more long-term, issue-based activism. I found a local environmental group called Plant for the Planet. I attended one meeting, then another. I went with them to lobby at the capitol in Olympia. I ran around getting signatures for a climate bill. It’s snowballed. Activism is now my extracurricular activity.

MJ: How did Zero Hour come about? I understand President Trump’s decision to withdraw from the Paris climate accord was one source of motivation—were there other factors?

JM: After that, I started really thinking about it seriously, but I was a little nervous because I knew how big of a task it is. I had only really been community organizing for a year. Then the natural disasters happened that summer: Hurricane Harvey, Hurricane Maria, record heat, droughts.

That summer I was at Princeton University for a political speech and communication program. I was staying at a dorm away from home on the other side of the country. I was surrounded by inspiration, all these young people who are politically active. That was when I was like, “Ok, we are doing this.” I had no idea how to start. I was just emailing people, messaging people. Suddenly people were coming to me asking, “How do I help?” We started to form a team and figure it out.

MJ: How did you come up with the name of Zero Hour?

“It’s zero hour to act on climate change. A lot of people will be like, oh we will deal with it later, it’s down the road, it’s not affecting anyone now. That’s really not true.”

JM: It’s zero hour to act on climate change. A lot of people will be like, oh we will deal with it later, it’s down the road, it’s not affecting anyone now. That’s really not true. Our logo— designed by Nadia, who is a 15-year-old—shows the Earth grayed out and a tiny sliver of red, a tiny sliver of hope. Let’s take advantage of this window of time we have left. Let’s change everything, because the world literally depends on it.

MJ: How have other teenage activists inspired or affected you?

JM: After the Parkland shooting, the kids had the town hall, they were protesting, they had the March for Our Lives. The media was covering it like crazy, and everyone was paying attention. It was surreal seeing that. This kind of attention and urgency is exactly what we at Zero Hour have been trying to instill for climate change. Obviously, they are two different issues, but in the end, we are both asking to live. Whether that’s free of climate chaos or gun violence, we just want to live. It was really inspiring to see that, and really kind of reassuring to see this can work. I saw [the Parkland survivors] and I thought, youth activism really is powerful. People really do listen.

MJ: Why have teens decided to get more involved in the climate action movement? Have adults dropped the ball?

JM: We are taking it on to tell them to do their job. Even though youth voices are powerful, we can’t pass the bills ourselves. When people say just let the kids fix it, it’s very annoying to me. The youth are raising our voices to raise the alarm, to say the adults are not doing what they are supposed to do. We are going to hold them accountable. Once we can vote, we are going to vote the people who aren’t doing the job out.

I think what’s really special about us doing this is we don’t have a hidden agenda. There is no money motivation. We want to breathe clean air, we want to not get killed in our schools, we want to have a planet that is livable. These are pure, basic asks. I can’t vote, but I’m counting down.

“We don’t have a hidden agenda. There is no money motivation. We want to breathe clean air, we want to not get killed in our schools, we want to have a planet that is livable.”

MJ: Tell me more about the march that Zero Hour has planned for this summer.

JM: It’s July 21, 2018. We are going to lobby before, on July 19, and hand our leaders our demands. We mapped out our route, we want it to be right on Capitol Hill. People have also reached out about sister marches, which will be done by independent organizers.

Our pledge for the march is to get our leaders to commit to not take any more money from fossil fuels. No good climate legislation can be passed if the fossil fuel industry owns our leaders. People take donations from them, and they do favors for the fossil fuel industry in return. How are they even going to expect to pass any climate legislation if our politicians across the country are in debt to the fossil fuel industry? I’ve talked to a lot of leaders and they don’t know the steps they need to take, exactly, or the numbers, or the science. We’re also kind of educating them. Scientists say that in order for young people to have a livable future, we have to get down to 350 parts per million [of carbon dioxide in the atmosphere] by the end of the century.

MJ: What do you hope to do in the future?

JM: I see myself in office of some sort. Not making the same mistakes as the politicians I am pressuring. Being that leader who puts the people before money. I know it’s easier said than done, but that’s my dream in terms of the future.