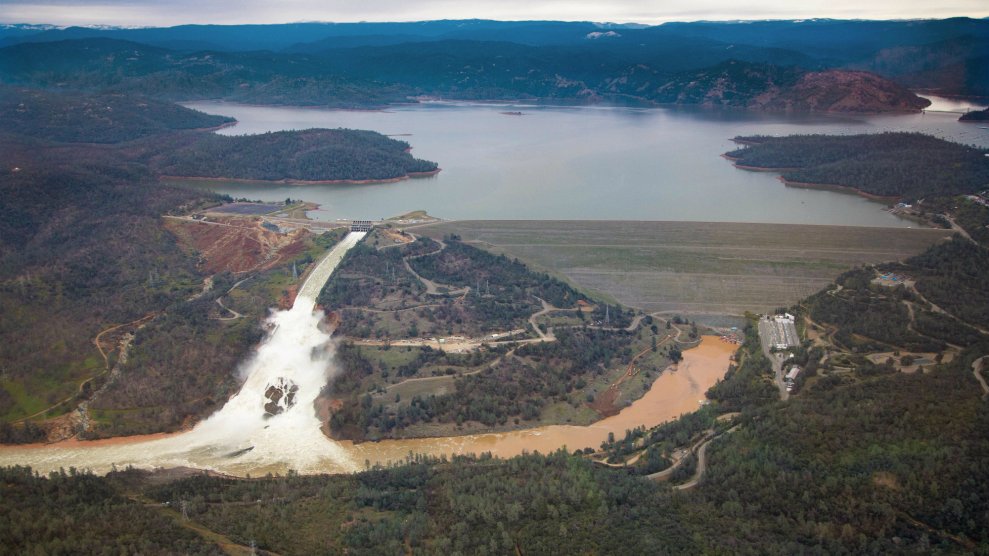 In December 1861, as a California drought was wearing into its fifth year, farmers on the West Coast were all asking for one thing for Christmas: rain. And boy did they get it. For 43 days rain and snow fell across the state, causing rivers to surge their banks, turning the 300-mile long, 20-mile-wide Central Valley into an ice-cold inland sea. LA got 66 inches. So deep were Sacramento’s floodwaters that the capital had to be relocated to San Francisco. With a quarter of the economy underwater the state was forced into bankruptcy. Thousands of people died. It was the most violent flooding California had ever seen, and no storms have come close to topping it since.

Soil cores and climate models tell scientists that megafloods like this one have happened about once every 200 years. Which, if you’re doing the math, means the state is due.That’s not the bad news. The bad news is that by the middle of the century, a megaflood could be striking California every couple of decades.

That’s according to a new study out this week in Nature Climate Change, which predicts up to a 100 percent increase in extreme precipitation swings across California over the next seven decades. “A lot of people have done the version of the analysis where they look at the mean precipitation change, and find it’s close to zero or uncertain,” says Daniel Swain, a climate scientist and the study’s lead author. That makes it seem like things will stay about the same going forward.

But looking at each kind of event separately—the droughts and the deluges—you come to very different conclusions. Using climate model data from the National Center for Atmospheric Research’s supercomputers, researchers at UCLA looked at how and when snow and rain will fall from the sky. “There’s actually a huge change in the character of precipitation variability,” says Swain.

California was a land of extremes well before humans started pumping carbon dioxide into the atmosphere, but Swain says that natural drought-to-deluge boomerang is already turning into whiplash. Between 2013 and 2016 the state experienced the driest three years in state history. Toward the end of 2016 a cluster of atmospheric river storms set rainfall records, causing mudslides, a major bridge collapse, and a failure on the Oroville Dam’s primary spillway. Months later the largest wildfire in state history burned 280,000 acres outside of LA followed shortly by more floods and deadly mudslides. This caroming between extremes year to year is only expected to increase as a warming climate allows the atmosphere to hold exponentially more water. Literally.

“It doesn’t mean it will always be raining, but it does mean that eventually all that water has to fall out somewhere.”

“The physical laws of thermodynamics raise the ceiling on the intensity of these precipitation events in a really robust, reliable way,” says Swain. “It doesn’t mean it will always be raining, but it does mean that eventually all that water has to fall out somewhere.”

It’s fairly normal for all of California’s yearly water to fall in just a few days; the difference between a drought year and wet year could be just one or two storms. So western water policy wonks have long been doing a balancing act. The trick is to have enough storage space to capture the sky’s bounty when it arrives, so it doesn’t charge unbound into populated areas. For a long time water managers have been able to rely on the mountains to help out—locking up much of the winter’s precipitation as snowpack and gently doling it out over the summer months. But warmer temps are making those reserves less reliable. Adding bigger, more frequent rain storms only makes management more challenging.

“Increased variability just kicks everything up a notch,” says Ellen Hanak, water policy director of the Public Policy Institute for California. “You’ve got to think about being able to store more for dry seasons and keep more water out of harm’s way in really wet years.” Those things can be compatible, she says, but it will take building new infrastructure and changes in the way cities and rural areas develop their lands.

Rather than fighting the coming flood waters by building bigger levees, California water managers are looking at other strategies to allow water to spread out on the land and recharge underground aquifers. Particularly porous soils can resorb up to a foot of water a day. Keeping those areas undeveloped should be a priority for communities in the future, says Hanak. “It can’t just be about concrete and rocks anymore. Keeping space in reservoirs for winter flood flows and having levees keep water out of harm’s way as it moves through river systems has worked pretty well for decades. But going forward we’re going to have to rethink all that.”

Swain says there’s still a lot of work to be done to resolve his models down to a scale that could actually be useful for local water managers, but that’s where his research is headed next. Still, it’s not obvious any amount of planning will make a difference when that 200 (soon to be 50)-year storm comes. “It’s hard to exaggerate how large an impact it would have on the entire state,” says Swain. The best he can compare it to? A 7.5 magnitude earthquake hitting downtown Los Angeles. The US Geological survey even has a catastrophically appropriate nickname for California’s impending megaflood: “the other big one.”