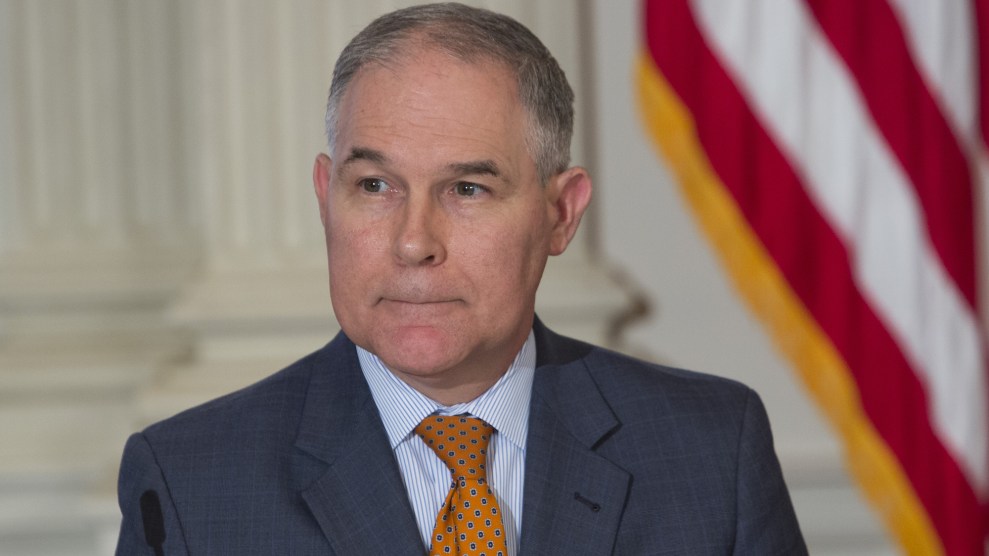 The New York Times is reporting that the Environmental Protection Agency quietly reassigned, demoted, or forced out at least five staffers—four career officials and one Trump appointee—after they objected to extravagant spending and travel requests made by Scott Pruitt, the agency’s administrator. In his 13 months at the EPA, Pruitt has spent $43,000 to build a secure phone booth in his office; has flown first class and on charter flights for trips around the country and overseas; and has been flanked by an unusual, 24-7 security detail that dwarfs those used by his predecessors and sucks resources from the agency’s environmental enforcement office.

Pruitt’s spending comes amid significant cuts to environmental programs and staffing at the agency. “We’re proud to report that we’re reducing the size of government, protecting taxpayer dollars and staying true to our core mission of protecting the environment and American jobs,” he said in a statement last year, according to Reuters.

A climate change skeptic with deep ties to polluters, Pruitt has been instrumental in carrying out President Donald Trump’s agenda of radical deregulation. But Thursday’s Times story follows string of new revelations about Pruitt’s leadership that have put him on rocky terms with the White House. Trump said earlier in the day that he still has confidence in the EPA administrator. “I have to look at them,” said Trump, when asked by reporters about the controversies surrounding Pruitt, according to Politico. “I’ll make that determination. But he’s a good man, he’s done a terrific job. But I’ll take a look at it.”

The Times story discloses new details about spending requests by Pruitt that EPA staff objected to—among them: a charter aircraft membership that would have cost $100,000 per month; a “bulletproof sport vehicle with so-called run flat tires, which keep a vehicle moving even when sustaining gunfire”; and two desks in his office suite that would have cost roughly $70,000. The EPA didn’t end up making these purchases but has nonetheless expanded Pruitt’s security detail; constructed the secure phone booth; and installed a biometric lock that “was not counted against Mr. Pruitt’s furniture budget,” according to the Times.

The story is filled with wild examples of Pruitt requesting treatment that hadn’t been provided to past EPA administrators. The Times reports that according to three sources, Eric Weese, a career EPA official who headed Pruitt’s security detail before being replaced, had “questioned Mr. Pruitt’s desire to use flashing lights and sirens in his motorcade.” In one incident:

Mr. Pruitt, who often ran late, wanted to use the lights and sirens to expedite local trips in Washington to the airport or to dinner, including at least one trip to Le Diplomate, a trendy French restaurant that he frequented. Such use was not consistent with agency policy, but Mr. Weese was unsuccessful in stopping it.

The agency said Mr. Pruitt played no role in deciding when the sirens and lights would be used. “The security detail for the past 15 years has used them in very limited fashion,” [EPA spokesperson Jahan] Wilcox said.

(It’s worth noting that one of the times Pruitt dined at Le Diplomate was last year, when he celebrated his star-turn in Trump’s announcement that the United States would withdraw from the landmark Paris climate agreement).

When I visited Oklahoma for my magazine profile of Pruitt, a number of the people I talked to brought up his spending habits from his days as the state’s attorney general. Oklahoma’s attorney general has a main office in Oklahoma City and a smaller office in Tulsa. But under Pruitt’s leadership, the Tulsa office, which was closer to his home, was moved to a building downtown, at triple the rent. As I noted: “When oil prices sank globally and state revenue plunged, most agencies saw their budgets cut. Pruitt’s expanded by 40 percent, and he hired nearly 60 new employees focused on fighting legal battles against the Obama administration, according to the Associated Press.”