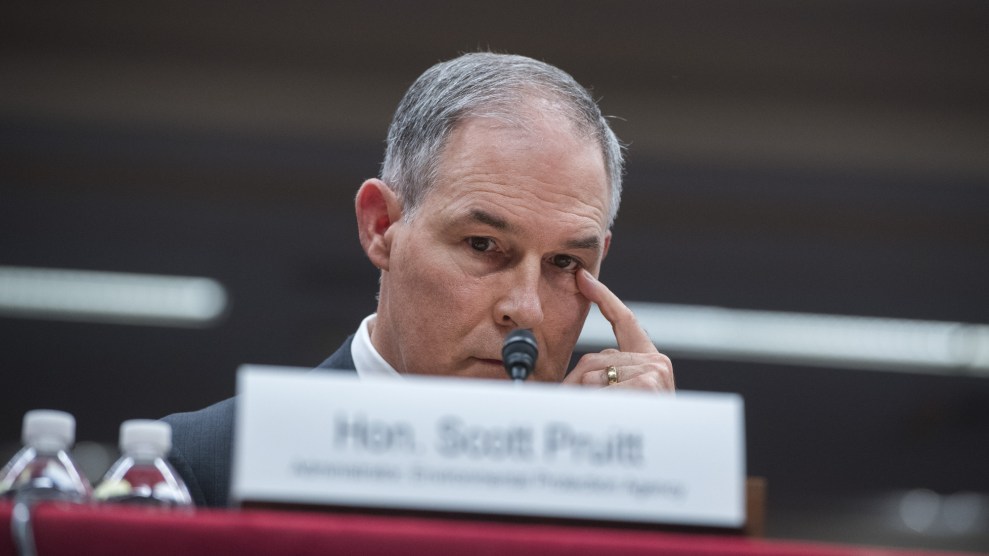 Given an opportunity to address the scandals that have dominated his 16 months at the head of at the Environmental Protection Agency, Scott Pruitt admitted Wednesday, “I would not make the same decisions again.” It was the only time in the two-hour Senate hearing that Pruitt took any responsibility for the decisions that have led to at least 14 federal investigations into his ethical conduct, alleged retaliation against whistleblowers, and extravagant spending.

Pruitt didn’t elaborate on his regrets. Instead, he made ample use of the passive voice when discussing specific issues raised by Senate Democrats. For instance, in addressing the secure phone booth that was installed in his office at a cost of $43,000 to taxpayers, he said, “There were not proper controls early to ensure a legal review.”

Sens. Tom Udall (D-N.M.) and Chris Van Hollen (D-Md.) pressed Pruitt another of his more controversial expenditures: a round-the clock security detail his predecessors did not have. The senators asked Pruitt whether he had personally requested the detail on his first day in office.

Pruitt maintained that the EPA’s criminal enforcement office made the decision independently, adding carefully, “I did not direct that on the first day.”

In another exchange about whether he had asked for sirens and flashing lights to be used to expedite a trip to his “favorite” Washington restaurant, the upscale French eatery Le Diplomate, Pruitt answered, “There are policies in place regarding the use of lights. Those policies were followed by the agencies.” Asked again if he had personally made the request, Pruitt said, “I don’t recall that.”

Udall also asked Pruitt how he came to pay below-market rent for a condo owned by a lobbyist with business before the EPA. Pruitt said his EPA aide Milian Hupp looked for housing on his behalf “on personal time.” Udall asked if Hupp was paid for her work, and Pruitt said no. “Then that’s a gift,” Udall said. “That’s in violation of federal law.” (Federal law that prohibits significant gifts from subordinates.)

Pruitt was ridiculed for another of his professional extravagances: flying in first class. The EPA has maintained that his flight upgrades were necessary for his safety after he had been heckled. “What a silly reason,” Sen. Patrick Leahy (D-Vt.) remarked in his opening statement. “Nobody even knows who you are…You have to fly first class? Oh, come on.”

Pruitt confirmed that he had set up a legal defense fund, which experts see as yet another ethical minefield because the administrator’s biggest supporters hail from industries that are prohibited from donating.

Van Hollen asked Pruitt if he will ensure that he doesn’t accept donations from lobbyists and people who have business before the EPA. Pruitt gave one of his few direct replies of the day: “Absolutely.”