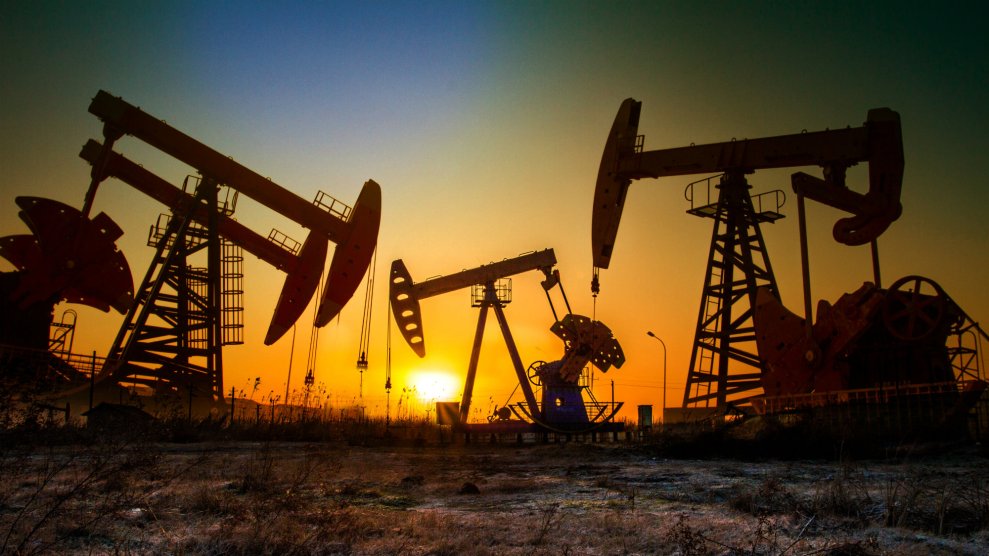 The city of Richmond, California, juts into the San Francisco Bay like the head of a rhinoceros looking west across the water, toward San Quentin State Prison and the tony towns north of the Golden Gate. It’s a low, industrial town, and 2,900 acres of it is an oil refinery.
Chevron is Richmond’s biggest employer, and through taxes contributes about a quarter of the city’s total budget. Chevron is also Richmond’s eternal nemesis. Industrial accidents are an ongoing issue. A fire at the refinery in 2012 sent 15,000 people to hospitals, resulting in a city lawsuit and a $5 million settlement. And in January Richmond joined six other California cities in suing oil companies for growing coastal threats related to climate change—primarily the sea level rise jeopardizing Richmond’s working coastline.
“We have 32 miles of shoreline on San Francisco bay, more than any other community, and a substantial amount of it is low-lying and subject to inundation,” says Tom Butt, Richmond’s mayor. “The root of this lawsuit and my biggest disappointment with these fossil fuel companies is that they’re all more interested in perpetuating themselves than they are in making a transition. They’re more interested in self-preservation than preserving the planet.”
“They’re all more interested in perpetuating themselves than they are in making a transition. They’re more interested in self-preservation than preserving the planet.”
In addition to the California cities’ various lawsuits, New York, Seattle, and municipalities in Colorado have all filed lawsuits against various combinations of oil companies since the summer of 2017. The suits are all at different stages; along with San Mateo, Richmond has been moved from state court to federal. Others have gone from federal back to state. On Thursday in a federal court in San Francisco, a judge heard a motion to dismiss from five fossil fuel companies, the defendants in the suit brought by San Francisco and Oakland. The same thing will happen in New York in June.
It’s a confusing landscape. The idea of cities using the courts as recourse in the fight against climate change is one that goes back at least to the 1990s, and the plaintiff side mapped out the detailed strategy just a few years ago. Now, in an era of federal deregulation and rising seas, these lawsuits feel increasingly urgent. The question is whether the courts will even see them as plausible.
In 1998, A third-year law student at Yale named Eduardo Peñalver wrote a journal article called “Acts of God or Toxic Torts—Applying Tort Principles to the Problem of Climate Change,” examining the possibility that, if regulatory or legislative action couldn’t stop climate change, maybe lawsuits could. (Peñalver is now dean of Cornell Law School.) Scientists came to the idea a few years later. Myles Allen, a University of Oxford researcher wrote an opinion piece for the journal Nature suggesting the idea, though Allen acknowledged that it’d be difficult to figure out who the plaintiffs and who the defendants would be. Everyone burns carbon-based fuels, and everyone benefits (and suffers).
A 2012 meeting of climate activists, scientists, and lawyers in La Jolla, California, may have been where the strategy really got worked out, though. Allen was on the list of attendees, as were attorneys who’d been involved in the Department of Justice’s case against tobacco companies in the 1990s—a partial model for the suite of climate lawsuits today. (Lead paint is another one.) At that time they didn’t have a piece of the puzzle: evidence that the climate companies knew their products caused harm, as the tobacco companies did.
In 2015 an investigation by the Los Angeles Times and Columbia Graduate School of Journalism partially closed that gap, showing that oil companies like Exxon had acknowledged the planetary risks of their products as early as the 1980s. Attorneys general started asking questions. The oil companies said they saw malfeasance in all this, and it’s true that some of the same lawyers involved in those ideas back then are serving as outside counsel for the cities that have filed the recent lawsuits.Whether you see all that as a conspiracy of business-hating leftists or the origins of a world-saving plan might depend on your political and scientific proclivities. But the climate for climate action has also changed. “What the cities would say is that cities have started to experience the impacts of climate change in ways they haven’t previously,” says Michael Burger, executive director of the Sabin Center for Climate Change Law at Columbia Law School. Sea level rise, drought/fire/storm/slide cycles, hurricane damage… “there’s real money that the cities are putting forward to deal with this,” Burger says.
Scientific attribution of blame for all that—ascribing portions of disasters to climate change, and ascribing portions of climate change to particular companies—is very much at the center of these lawsuits. Allen’s 2003 idea has evolved into extraordinarily specific work, like a 2017 paper that linked two-thirds of present day global temperature rise and sea level rise to 90 fuel companies, and 6 percent of sea level rise points straight back at Exxon, Chevron, and BP.
“One of the core cross-cutting issues here is whether or not courts are the right place to make a decision about who’s responsible for the harms from climate change, given the number of people involved in creating the problem.”

One of the papers’ authors, Peter Frumhoff, chief climate scientist at the Union of Concerned Scientists, was also at the La Jolla meeting. And he was at a press conference in advance of Thursday’s hearing. “Cities and communities need to be preparing for further sea level rise and the damage associated with storm surge and flooding, and there are real costs associated with that,” Frumhoff said. “In my view, and I’m not speaking as a scientist but as a citizen, it’s also appropriate to be asking why taxpayers alone should be paying those costs.”

(In a “tutorial” on climate change held by the same circuit court judge who heard the motion to dismiss Thursday, the lead lawyer for Chevron acknowledged the science that says human beings are causing climate change by burning carbon-based fuels. He denied that was the fault of the companies that legally extracted and refined the stuff.)

The really big question about whether a city can sue an oil company for climate change isn’t the climate change part. It’s the “sue” part. A large portion of the oil companies’ motion to dismiss, the subject of the hearing on Thursday, argued that courts weren’t allowed to rule on whether something was a nuisance—the substance of the lawsuits—if that something is already regulated by a federal law.

Which, in this case, is the Clean Air Act. (Ironically, the Trump administration is threatening to upend the law, so it’s hard to know how to think about this logic.) “One of the core cross-cutting issues here is whether or not courts are the right place to make a decision about who’s responsible for the harms from climate change, given the number of people involved in creating the problem,” Burger says. “This is a political question—that tort law is not an appropriate vehicle, that congress and the executive branch are far better situated because it’s an international and global problem and requires a coherent nationwide response.”

The new strategy for climate lawsuits has an answer for that, of course. The cities aren’t asking for a ban or for new regulations. They’re asking, essentially, for money to fix a problem that, they say, the oil companies knew about but ignored—intentionally obscured, in fact. “Oil and gas, like cigarettes, are products. The companies that sell them are liable for the damages they cause,” says Sharon Eubanks, an attorney at Bordas & Bordas who was lead counsel in the Department of Justice’s RICO case against the Philip Morris tobacco company. “They have misled the public about the product’s dangers.”
That’s why Thursday’s hearing was so important. Four of the oil companies—all but Chevron—argued that they didn’t have close enough ties to California to be sued there. The judge allowed a limited discovery for the plaintiffs, San Francisco and Oakland, to try to show that they did. (Chevron, being based in the Bay Area, didn’t make that argument).
The rest of the questions got kicked down the road a ways. Disclosure, though, is what the plaintiff side is really looking forward to. The cities’ attorneys will get to ask for all the documents they can think of, and maybe even depose some executives, in the hope of turning up even more evidence that oil companies actively covered up known climate change effects of their products. The LA Times found that oil companies had rebuilt their own infrastructures to be more resilient against sea level rise and storms at the same time as they were arguing that the science of those things was too uncertain to do anything about.That’s a bad look—bad enough that even a city dependent on oil might want a bigger piece of the action. Especially if that city, like Richmond, may be partially underwater by the end of the century. “I’ve told them, I said, look, in the best of all worlds, what would I want from Chevron? I’d want you guys to say, yes, we realize climate change is real, we realize fossil fuels are making it happen, and we have a plan to transition our business into a renewable energy business over the next 25 years.” says Mayor Butt. “They sort of shrug their shoulders and say, ‘We’ve gotta do what we’ve gotta do.’”