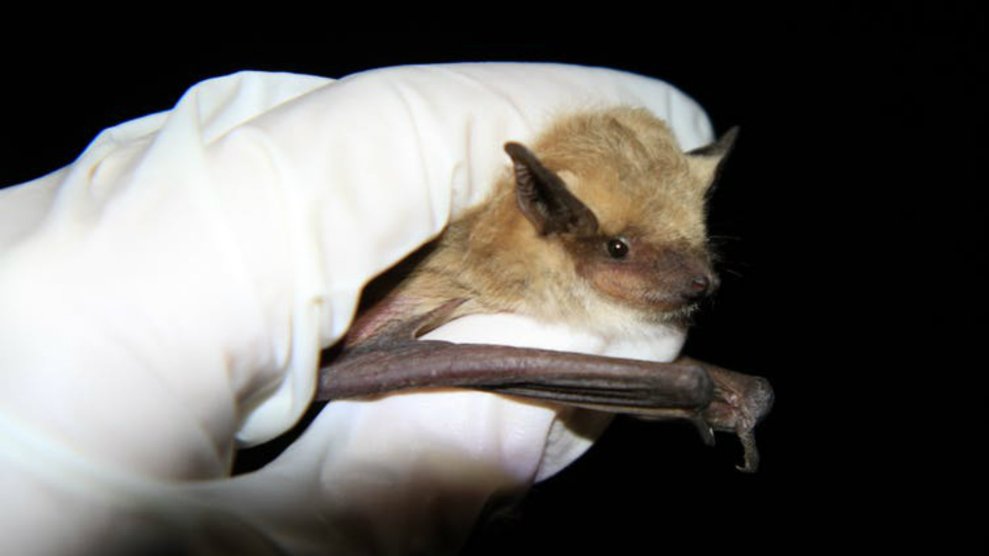 But water can vary both in quantity and quality, and animals have different needs. Some species, like the kangaroo rat, can survive without drinking water for years by obtaining it instead from its food. More often, the movements of desert animals are restricted by reliable access to water.

Part of my research examines relationships between bat species and water quality in an African desert. Based on my observations, I believe that in arid places, people may be able to locate usable water sources and detect changes in the quality of sources they are already using by observing bats.

People may be able to locate usable water sources and detect changes in the quality of sources they are already using by observing bats.

People have used plants and animals as environmental indicators for many years. Most famously, miners carried canaries into coal mines with them to detect toxic gases, including carbon monoxide, before the development of modern safety equipment.

Today, scientists use many living organisms in their natural habitats to assess changes in the environment. Good bioindicators are typically species that are abundant, common, and whose lives are relatively well-understood but also are sensitive to specific disturbances or stresses, such as water scarcity or pollution.

For example, some researchers infer pesticide concentrations by monitoring the population sizes and body conditions of amphibians and fish-eating birds. Plants are useful bioindicators for many types of air pollution because they absorb air through their leaves. Similarly, fish and other small aquatic organisms can be effective bioindicators of water pollution.

According to the United Nations, global water use has grown at more than twice the rate of human population growth over the last century. In many places, groundwater is being used at faster rates than it can be replenished. And water quality is declining. At least a dozen major cities could face limits on water use in the next several decades.

Water quality typically worsens as humans pump up increasing quantities from underground. Salt and toxic substances become more concentrated in the remaining groundwater as its volume decreases. At the surface, pollution from agriculture, mining, and human waste reduces water quality in rivers, lakes, and ponds.

In the Namib Desert, pools of freshwater are rare and isolated. The ephemeral rivers of Namibia flow only a handful of days each year, so it is very hard for aquatic insects and fish to travel between bodies of water. But since bats can fly, they can find freshwater sources over large areas  and may visit multiple ponds in a single night. One question I am studying is whether bats are more likely to travel to seek out high-quality water than to find food.

There are more than 1,300 bat species worldwide, living in diverse environments on every continent except Antarctica. They pollinate plants, disperse seeds, and consume insects—including disease-spreading vectors like mosquitoes.

Because their wings are large and uninsulated, bats are vulnerable to dehydration. Even the most desert-adapted species need water. Water quality affects them directly when they drink and indirectly when they consume insect prey, many of which spend part of their lives growing in water. This makes bats excellent indicators of water quality. In extreme cases, they have died after drinking water contaminated with insecticides or heavy metals.

To find high-quality surface waters, people could observe bat activity levels using acoustic detectors to record bats’ echolocation calls. Although mostly inaudible to humans, people can typically identify bats to the species level by their calls. Monitoring species that are associated with high-quality water over time would help municipalities detect changes in water quality. During my time in Namibia, I observed that activity by all local bat species dwindled at springs with high salt concentrations.

During my time in Namibia, I observed that activity by all local bat species dwindled at springs with high salt concentrations.

Water chemistry affects different bat species in different ways. For instance, one study found that certain species in Israel’s Negev Desert, such as the lesser horseshoe bat (Rhinolophus hipposideros), avoided drinking water of lower quality, while other species appeared to be more pollution-tolerant.

Scientists are still trying to discern whether and how well bats tolerate salty drinking water. A study from western Australia suggests that elevated salt levels in surface waters due to gold mining may decrease bat activity, foraging, and drinking. If this is true, people living in those areas could detect changes in water quality, such as increased salinity, by gauging activities and drinking patterns of sensitive bat species. With new tools such as bat detectors for smartphones, this is becoming easier and cheaper than testing water samples in labs.

Water quality challenges aren’t limited to distant deserts or cities in arid regions such as Cape Town, South Africa. In my New Jersey coastal hometown, production wells pump freshwater from about 900 feet below ground out of the Kirkwood-Cohansey aquifer system. As water levels decline in the aquifer, saltwater enters pores previously filled with freshwater. Saltwater is currently approaching my county’s wells at a rate of about 300 yards per year.

In addition to groundwater pumping, paved surfaces and deicing road saltshave increased salt concentrations in bodies of freshwater across the United States, threatening the state of our drinking water at vast scales.

Bats’ potential as environmental indicators is just the latest reason for studying and conserving these important creatures. Worldwide, about one-third of bat species are endangered, vulnerable to extinction or “data deficient,” meaning that scientists know too little to make judgments about their status. But with effective protection, monitoring sensitive bat species soon could be a viable way to find clean water in the far reaches of remote deserts—or even the rural United States.

This article was originally published on The Conversation. Read the original article.