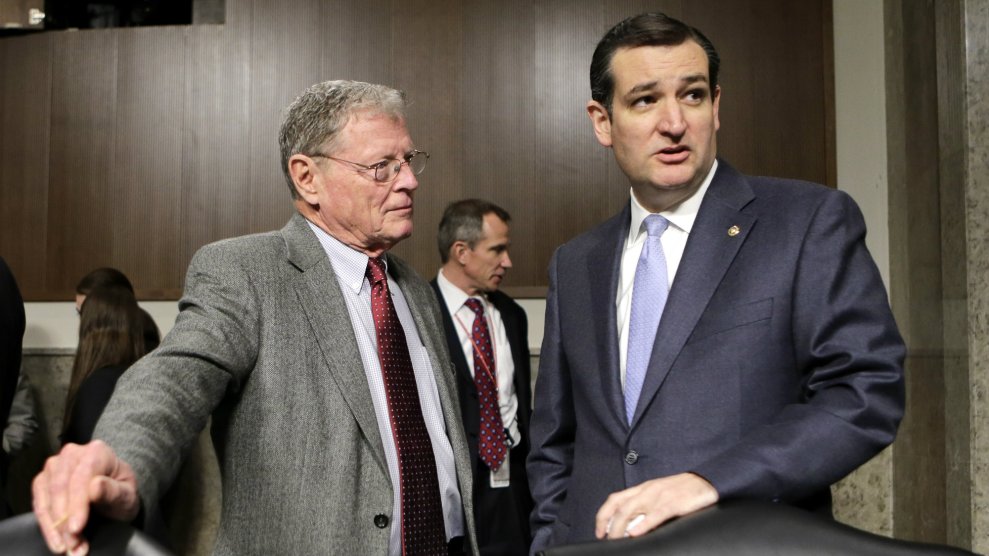 Four Republican senators described the National Science Foundation as a political rather than scientific organization because of its study of climate change and have called for an investigation into the group by the agency’s inspector general’s office. In a scathing letter to the IG’s office last week, the senators lambasted NSF for granting over $4 million to two programs that encouraged TV newscasters to discuss climate science on air. This is not the first time Republican lawmakers have asked for the nonpartisan science agency to be investigated for supposed partisan bias.

“NSF, intended to be a supporter of basic research beneficial to the common good, has issued several grants which seek to influence political and social debate rather than conduct scientific research,” reads the letter, which was signed by Sen. Ted Cruz (R-Tx.), Sen. James Inhofe (R-Okla.), Sen. James Lankford (R-Okla.), and Sen. Rand Paul (R-Ky.). “The manner in which grants such as these receive federal funding is deserving of further scrutiny.”

“NSF, intended to be a supporter of basic research beneficial to the common good, has issued several grants which seek to influence political and social debate rather than conduct scientific research.”

The senators’ main beef with the 68-year-old independent science agency concerns two grants  that constitute approximately 0.05% of its $7.8 billion budget. Both focus on providing TV meteorologists with additional scientific education about climate change. The first is for a project that tests the benefits and obstacles to using TV meteorologists “as effective informal communication vehicles for scientific information about climate change.” The second is to expand the climate education program, known as Climate Matters, with different newscasters nationwide. Both requests were proposals from George Mason University, but it was the second one, which detailed a partnership with the nonprofit organization Climate Central, that really disturbed the senators.

Climate Central was founded in 2008 as an organization pairing scientists and journalists “whose purpose was to ‘disseminate straightforward climate data and studies to the public,'” according to a 2012 description in the Washington Post that the senators included in their report. But, in recent years, the group had apparently become “more of an advocacy group,” the Post reported, “aiming to get people to do more about what the group now sees as ‘a clear and present danger’—global climate change.” The organization has received funding from all manner of governmental and private groups, including NASA, the Department of Energy, and the MacArthur Foundation, according to its website. Ben Strauss, Climate Central’s CEO, told HuffPost that the group “”scrupulously avoid[s] advocating for any policy or political position.”

In a statement released in response to the letter, NSF spokesperson Sarah Bates said Climate Central “specializes in scientifically accurate broadcast communication about climate change” and rejected the senators’ characterization of the grant-approval process.

“NSF is not a regulatory or policymaking organization. NSF is the only federal agency that supports all fields of fundamental science and engineering research and education,” she said. “Each proposal submitted to NSF—including those deemed ‘troubling’ by Senators Paul, Cruz, Lankford and Inhofe—is reviewed by science and engineering experts well-versed in their particular discipline or field of expertise.”

Inhofe, who famously brought a snowball to the floor of the Senate to argue against climate change, has been a prominent critic of NSF and other federal science agencies, including the National Oceanic and Atmospheric Administration, which plays a major role in forecasting the effects of climate change. Along with Cruz, Lankford, and Paul, he also receives generous donations from fossil fuel companies.

While climate change skepticism permeates Republican politics and Trump administration policies, the call for an investigation into a nonpartisan agency for funding climate change education opens a new front in the attack on science during the Trump era. Despite the overwhelming consensus among scientists that climate change is real and primarily caused by humans, the public officials determining environmental policy remain skeptical. Rather than view climate science as an established, nonpartisan point of inquiry, leading Republican lawmakers and Trump officials, often supported by the fossil-fuel industry and other conservative funders, dismiss it as an example of liberal propaganda.

“Research designed to sway individuals of a various group, be they meteorologists or engineers, to a politically contentious viewpoint is not science—it is propagandizing.”

“Research designed to sway individuals of a various group, be they meteorologists or engineers, to a politically contentious viewpoint is not science—it is propagandizing,” the senators’ letter argues. “Such efforts certainly fail to meet the standard of scientific research to which the NSF should be devoting federal taxpayer dollars.”

Despite the senators’ fears, the NSF programs appear only to have mildly enhanced the public profile of climate change on television news programs. After a brief upswing between 2013 and 2015, broadcast networks devoted only a total of 50 minutes to covering climate change in 2016. That number increased in 2017 to 260 minutes, but 79 percent of that time included statements from the Trump administration, according to reports issued by liberal watchdog group Media Matters. (The program has had a much more successful impact on local news broadcasts, where Climate Central’s efforts are more directly focused.)

Whether the letter will actually spur the IG’s office to open an investigation remains to be seen. In a statement, the IG’s chief of staff Lisa Vonder Haar said in an email that the office “plans to assess the issues raised by the four senators this fall,” adding, “we will determine an appropriate course of action once our assessment is complete and respond directly to the four senators to let them know what action, if any, we will take.”