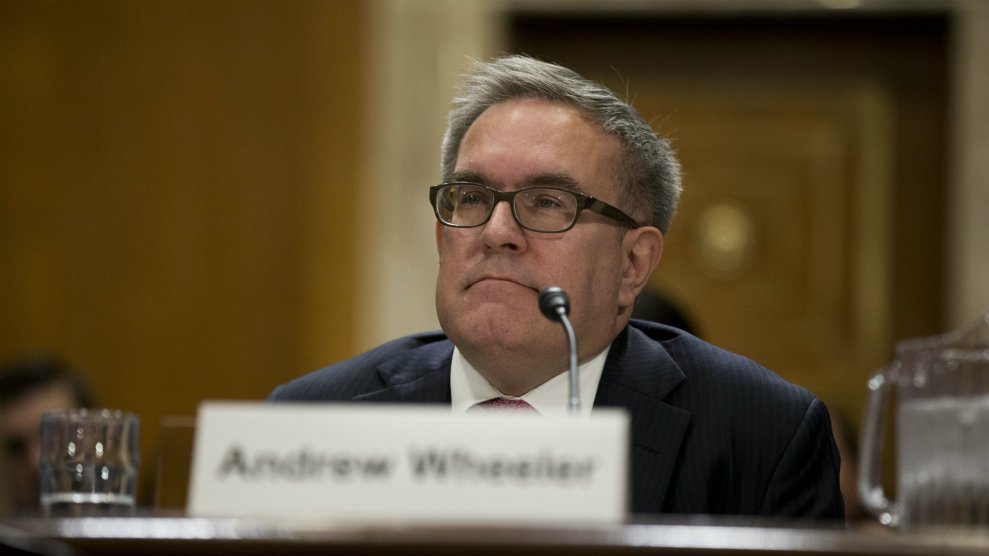 There’s trouble in Trumpland, and California is caught in the middle. According to 11 sources cited in the New York Times on Friday, acting EPA chief Andrew Wheeler has stalled plans to roll back the hallmark California fuel emissions waiver, which allows the state to place stricter limits on car and truck emissions than the rest of the country. Wheeler, the sources say, doesn’t believe the administration’s plan will hold up in court.

“It’s going to be a hard case for the EPA to win,” says Cary Coglianese, professor of law and political science at the University of Pennsylvania. “If you had to place a bet right now, you’d probably be wise to bet on California.”

Under the 1970 Clean Air Act, California can request a waiver from the federal government to set higher emissions standards for cars and trucks. The waiver was introduced to allow the state to tackle its particularly severe air pollution. (Eight of the country’s 10 most polluted cities are in California.) The state’s most recent waiver was granted in 2013 by President Obama, and it allows California to limit carbon emissions and require automakers to sell a certain number of low-emission and zero-emission vehicles in the state.

Over the past several months, however, the Trump administration has signaled that it hopes to end this decades-old regulatory tradition—first by revoking the 2013 waiver. If the EPA does pull the plug on the state-specific standards, California will certainly sue, setting up a conflict between state and federal rights to regulate the environment. And history, in this case, supports California.

Revoking the waiver “would be unprecedented,” says Jody Freeman, a Harvard law professor. “There have been dozens of waivers that California has gotten over the decades since the 1970s, and [the EPA] has never revoked one.”

So the EPA would have to buck tradition and its own previous rulings. “When the EPA grants the waiver in the first place, they build an administrative record to support the decision,” Coglianese tells Grist. “To revoke a waiver, the new administration will have to somehow put forward a case that is in direct contradiction to the administrative record under Obama.” That kind of regulatory flip-flop would look sketchy in court.

But the EPA might have one final argument up its regulatory sleeve. The 1975 Corporate Average Fuel Economy rules give the agency exclusive power to regulate fuel economy. The federal government could argue that these rules “preempt” the debate over the waiver. That means that even if California can win on the waiver question, the state might still be restricted from regulating greenhouse gas emissions and requiring low and zero-emission vehicle sales within its borders.

“It’s a belt-and-suspenders argument,” Freeman says. “It’s like saying, ‘We’re revoking your waiver, but even if it doesn’t work, you’re preempted.'”

That would be a strong statement of federal power for an administration—and an EPA—that has vocally supported states’ rights. “Andrew Wheeler and Scott Pruitt have said that a core principle is to return regulatory power to the states,” Ann Carlson, professor of law at UCLA, tells Grist. “And at the same time, they’re undermining California’s ability to regulate.”

So will Wheeler bend to Trump administration pressure and try to revoke the waiver? It could still easily happen. But even if the EPA does try to step on California’s authority, the length of the court battle ahead means that the standards will stay in place for some time.

Many of Pruitt’s environmental rollbacks have stalled in court, as the embattled former EPA chief rarely did his due diligence to help them withstand judicial review. Wheeler thus far seems more careful about wielding the EPA’s power so rashly. But that may also mean that the acting EPA chief is ultimately more effective at rescinding Obama-era regulations.